Andre Johnson and Mario Williams already fell to it.  James Casey and Danieal Manning have been its victim.  Sunday, Darryl Sharpton became the latest player to succumb to it.  While it's a common ailment among football players, it rarely affects the general population.
This is one of those rare times.  Early Monday afternoon, the Centers for Disease Control announced a level three outbreak of a pathogen commonly found in the football world;  Texanus Boselliosis, otherwise known as the "injury bug".  CDC investigators have found a rogue strain of Boselliosis among writers for "Battle Red Blog," a blog about the Houston Texans and, for some inexplicable reason, Zima.

"The symptoms of Boselliosis were difficult to pinpoint at first," said Dr. Aethelbert Fromage, an investigator for the CDC, "Typically, patients present with slurred speech, inability to maintain balance, and sudden bursts of anger.  With Texans fans, that's a normal Sunday afternoon.  Because of this, their condition went untreated for too long and now people are getting seriously hurt as a result."
Boselliosis can present itself in many different ways.  More common ailments include ligament tears and bone bruises that don't last very long, but advanced Boselliosis can have long-term effects without proper treatment. 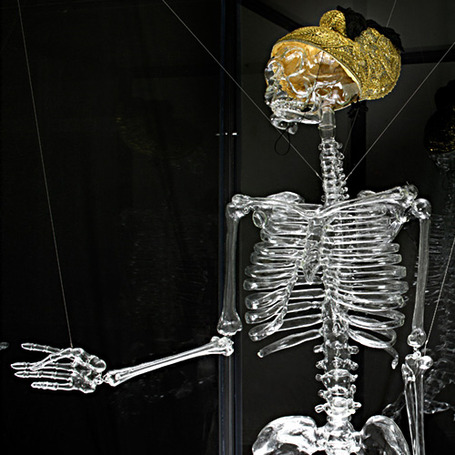 Pictured above:  A rare, full-body X-ray of Matt Hasselbeck.

"The league is strewn with cases of terminal Boselliosis," said an anonymous trainer. "Look at poor Bob Sanders.  He caught Boselliosis his rookie year and nobody did anything to treat it.  Years passed before he was diagnosed, but the damage was done.  The injury bug literally turned his bones into glass.  Same can be said for Matt Hasselbeck."  When asked if the complaining to the refs is a side effect of Boselliosis, the trainer replied, "No.  He's just a whiny (deleted)."

Nobody's entirely sure how the bloggers at BRB became infected with the disease, but there's little doubt in Dr. Fromage's mind that they've got it.
Said Dr. Fromage, "Yep."

So far, the damage has been pretty severe.  One blogger, who goes by the alias bigfatdrunk, dislocated his shoulder while doing the normally mundane task of typing on his keyboard.  "I don't know what happened.  One minute I'm typing, the next I'm in a sling.  And it's my beer-drinking arm too.  I need that arm!"

MDC, another Texans blogger, reportedly tore an ACL while editing a post involving Venn diagrams.  When asked how he came down with Boselliosis, MDC shrugged and said "It's Arkansas. I'm surprised that I haven't caught the plague yet living here."
But the worst case befell the blog's editor and fearless leader, Tim.  Tim watched his foot literally fall off of his leg after looking up information about Connor Barwin.  "It was the weirdest thing," he said, his foot duct-taped to his ankle, "I was doing research and I heard this weird 'thoomp' noise.  I look down, and my foot's on the floor.  First thing I thought was 'Wow, I really need to scrub my feet better.'"