Mini Coupe Power Play: The Texans Defense Is More Reliable Than My DVR

Share All sharing options for: Mini Coupe Power Play: The Texans Defense Is More Reliable Than My DVR

Sometimes our reliance on technology is a curse.  Not an evil "cost you your first born" type of curse, but more of a "damn, that kind of ruined my afternoon" curse.

I spent the past week in Boston for work and then stayed through the weekend for a friend's wedding.  I flew back home on Sunday.  Had this exact scenario occurred five or ten years ago, I would have scheduled an early flight on Sunday to ensure that I was back in time to watch the game (hangover be damned).  Now, though, I figured I could just set my DVR and actually get in a few hours of recovery sleep before traveling.

After getting home from the airport, I walked into my house, said hello to my family and immediately glanced at the DVR.  To my horror, the record light was not on.  It was the scariest Halloween ever (technically Halloween eve, but I was still shuddering about it a day later).

Fortunately, the game was still going on and I was able to catch the game from the end of the third quarter on.  In this time, I managed to see two excellent candidates for the Mini Coupe Power Play of the week.

The two nominees this week are Jason Allen's interception to start the fourth quarter and Owen Daniels' 3rd down reception on what turned out to be the game clinching drive.

Both were huge plays in a tight game.  Both happened with the Texans only up by a touchdown.  Both improved the Texans' probability of victory by approximately the same margin (6% for the Allen pick, 7% for the OD catch -- thank you, Advanced NFL Stats).

In the end, I decided on the Allen play because, well, it "felt" bigger.  It led to an Arian Foster touchdown and if Ben Tate had not fumbled later on, it would have pretty much been the decisive play (yes, I know... if "ifs" and "buts" were beer and nuts, we'd party).

Besides, from the limited game action that I saw and from what I can garner from post-game reactions, the defense really deserves the love here.

So let's break it down. 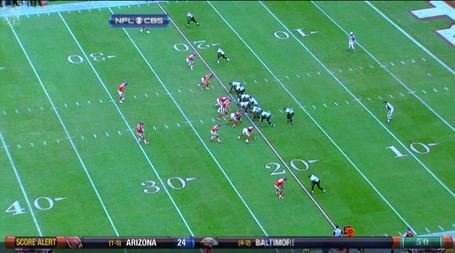 Pre-snap, you can see that the Texans are in a nickle formation with Jason Allen towards the bottom of the screen lined up across Mike Sims-Walker.  Troy Nolan is the safety with deep coverage responsibility on that side of the field. 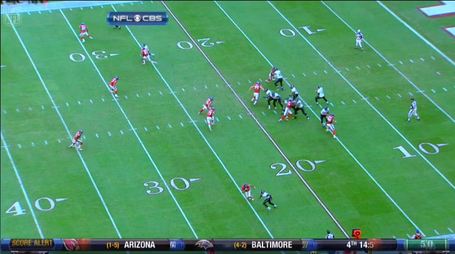 Blaine Gabbert takes a five step drop and releases the ball pretty quickly -- i.e., he does not rush it because of pressure.  Based on what we can see here, Nolan had just started to shift to his right and Allen, knowing he has deep help, plays MSW tight.  Allen has taken away the back shoulder throw, so Gabbert's only options here would have been either threading the needle between Allen and Nolan or putting it high toward the sideline and hoping that Sims-Walker can fight for it. 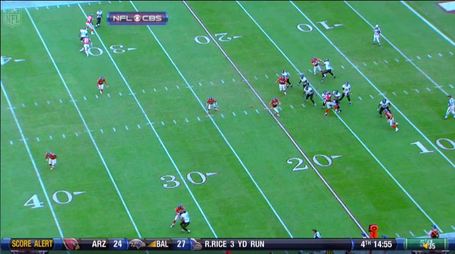 When the ball is about halfway there, we can see that Gabbert has chosen (e) none of the above.  He might have had a chance with the deep ball, as Nolan is a little bit late getting over, but it looks like Gabbert tried a back shoulder throw that just wasn't there.  Also, kudos to Allen for quickly realizing the ball was thrown, turning around, and putting himself in position for the pick (as opposed to not turning around, running into Mike Sims-Walker, and drawing a flag -- see, this is NOT taught by the Texans' coaches). 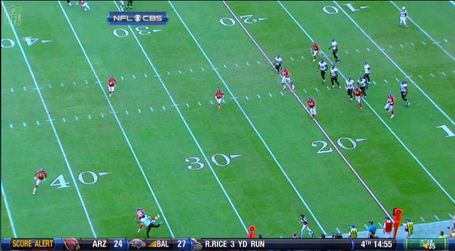 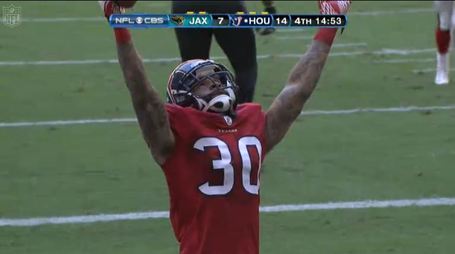 Even though Allen is ruled down on the play, he still gets up, returns the ball to the endzone and shows off his tats.  Well done, my man.  Well done.

So for that, we salute you, Jason Allen, with the Mini Coupe Power Play of the week.