Throughout the 2009 season, there was a huge hullaballoo about the Houston Texans having the best defense in team history.  At the time, I argued it was smoke and mirrors: we consistently under-performed against teams that played remotely talented quarterbacks, and we took advantage of the Rusty Smiths Keith Nulls of the league.  2010 proved me correct as Richard Smith Frank Bush put together one of the worst defenses in NFL history, where we were largely destroyed through the air.  When thinking about the quarterbacks we've faced so far in 2011, the similarities are glaring.  So let's take a deeper look at your Houston Texans' 2011 defense (h/t Barryfromtexas for the idea).

First, let's take a look at the QBs (with QB Rating) we've faced in 2011.  Please try to keep the snickering to a minimum:

That's an unweighted average of 82, which is, shockingly, a solid 4 points higher than what we faced in 2009.  The 2011 difference is basically Andy Dalton vs. Colt McCoy.  Not huge, but it is meaningful.

Let's look at how we've performed against the run vs. team's averages this year:

Ah, well, this looks not dissimilar to 2009: we're stuffing the box (Note: We aren't.) and forcing crappy quarterbacks to beat us through the air.  Aside from the Daniel Thomas experience against Miami, we've held teams right at or (at times, far) below their season average.  Clearly, teams are making up for their rushing deficits through the air as we often saw in 2009: 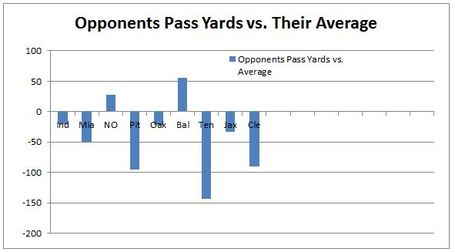 If there is one aspect to worry about on the chart above, it's that two of the three best QBs we've faced (Brees and Flacco) have put up larger than their average games against us.  Is this a concern going forward?  The best QB we face over our remaining games, as rated by QB rating, is Matt Hasselbeck.  After that, it's Andy Dalton and Matt Ryan.  It's a concern, but it's not a deal-killer (unlike herpes).

If we're going to look at the similarities, let's look at what's changed.  Bernard Pollard is gone, which was a huge, obvious strength against the run, but a bigger weakness in pass defense.  Johnathan Joseph, Glover Quin at safety, Danieal Manning, and, yes, even Kareem Jackson, who is probably an upgrade over the 2009 version of Dunta Robinson, are now in the fold.  Frank Bush is coaching one of the worst linebacker corps in the league in Methopotamia.

But there's something even bigger at work.  In 2009, your Houston Texans collected just 30 sacks all season.  Mario Williams had 9 of those all by himself.  After just nine games in 2011, we've already tallied 24 sacks, and it's no longer a one-man show to accomplish that feat.

Conclusion: Are there similarities between the 2009 and 2011 Texans?  Yes, indeed.  In both years, we've played a collection of pretty crappy QBs during a Golden Era of sorts for QBs around the league.  But the similarities, essentially, end there.  The 2011 Texans are getting to the QB, forcing turnovers (17 interceptions and forced fumbles already vs. 24 in all of 2009), and are coached by Wade Phillips instead of Frank Bush.

That's not to say we are a Top 5 defense in the NFL right now (we aren't by advanced metrics), or that we won't struggle against better passing teams (we will).  In other words, we still have holes, but they aren't as glaring because of who we've faced so far.  They aren't as exploitable, either.  For the rest of the regular season, any weaknesses shouldn't be a concern because of our match-ups, and that's great news in and of itself (though losing Mario is a tremendous blow).  Jumping from one of the worst defenses, literally, in NFL history to where we are today is a huge testament to our organizational strategy and, in a massive change, an acknowledgement of what this team needs.  But if we just happen to be playing a bunch of fairly crummy QBs this year?  Well, dang.