Alas, this is the final installment of the Mini Coupe Power Play, and again, we are struck with a bit of a conundrum.  There is no single defining play that won this game for the Texans.

I mean, the game was pretty much over after the Texans won the coin toss, but that would be a horrible play to break down ("The Texans win the toss... jump... aaaaand, done").

We could use one of the variety of incredible runs by our two headed beast of a running back, such as Ben Tate's touchdown on the opening drive, Arian Foster's 19 yard touchdown scramble, or the veritable buffet of 10+ yard rushes in the second half.

In the end, however, when Matt Schaub has a touchdown run for the second straight game that was designed and run to absolute perfection, it has to be the choice.

When I started looking at this play, I was struck by the brilliance of this play design.  For all the crap dished out to Kubiak and Dennison in the past, they did an absolutely stellar job of both understanding the Browns' tendencies and exploiting them. 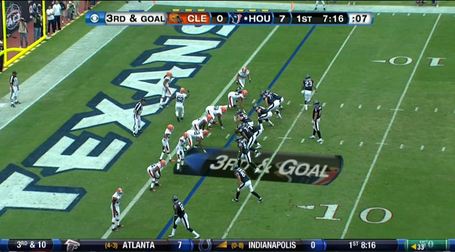 Pre-snap, you can see that despite being on the two yard line, the Texans have spread the Browns wide, forcing them to use their nickle personnel.  Arian Foster goes in motion, leaving the dreaded empty backfield.  The Texans also have Jacoby Jones, Kevin Walter, and Derrick Mason lined up on the left side, while Owen Daniels is lined up on the right side of the line of scrimmage.  There are two key things to note here.  First, when Foster goes in motion, Usama Young goes with him, leaving D'Qwell Jackson as the only defender in the middle of the field.  Second, though the Texans have trips left, the Browns are lined up with four defensive backs on that side of the field.  I can't tell exactly who's lined up across from Jacoby or Walter, but both safety Mike Adams and cornerback Joe Haden are lined up across from Mason.  Curious. 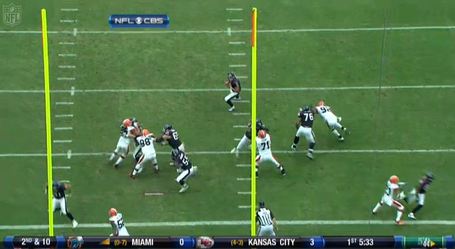 The end zone camera is the best to see what happens next.  As Schaub drops back to pass (or so you think!), all three receivers on the left side break left, vacating that area of the field (note that all four DBs go out with them, including Joe Haden, who was the most inside guy -- I guess they don't respect Schaub's wicked scrambling ability).  Daniels runs an out toward the right drawing Jackson with him.  Remember, Jackson was the only defender in the middle of the field, but his decision to double team Daniels leaves it completely empty.  Looking at the line of scrimmage, the Browns only rush four.  Eric Winston and Mike Brisiel do a great job of pushing their guys left and Duane Brown rides his man deep in the pocket, leaving Wade Smith up against Ahtyba Rubin -- i.e. the only guy with a chance to stop the play.  Notice Chris Myers with nothing to do.  My guess is that he was supposed to block Jackson, but again, Jackson's decision to double team OD made that point moot. 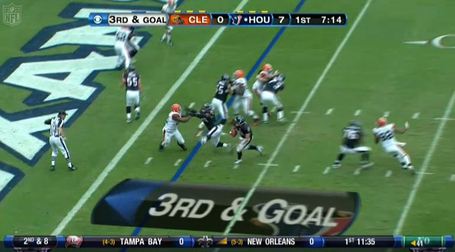 Schaub takes flight and the only person with any chance to stop him is Rubin.  Mmmmm.... reuben.... 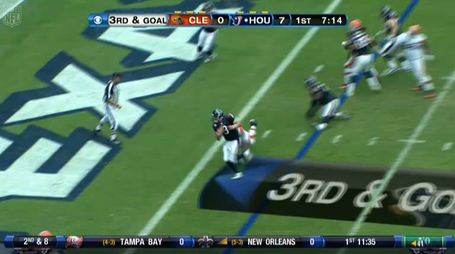 Smith gets juuuuust enough of Rubin to hold him off and Schaub is able to break the tackle to get into the endzone. 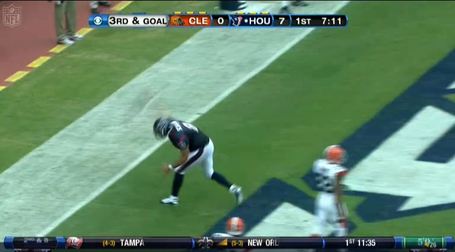 Schaub then spikes the ball emphatically -- like a man who's done this before.

The Texans executed this play to absolute perfection, but the real catalysts here were Kubiak and/or Dennison (Kubison?  Dubes?) for designing a brilliant play.  They knew the Browns were not going to expect the QB sneak (despite the fact that the Texans did it just last week -- though in fairness to them, the Texans weren't due another one until 2014).  They also properly predicted that the Browns defensive backs would be drawn out to the Texans receivers, ignoring Schaub in the process.

So kudos to Dubes, and here's to your Mini Coupe Power Play of the week.