Finding yourself unemployed and over 40, you do strange things sometimes. Like training your Border Collie to run Andre-like routes when playing Frisbee. And then teaching your wife's Chiweenie (yea, that's a Chihuahua-Dachshund mix and they are even funnier looking than the name sounds) to play cornerback and nicknaming her "K-Jax".

The name was a no-brainer: Just like Kareem, our Chiweenie is quick, competitive and lacks top end speed (you try sprinting on 4" legs with an 18" body). She was also coached by Nick Saban and the local shelter told us she was the most pro-ready dog they had. Take the jump to see just how pro-ready she was.

The other day I was yelling coaching K-Jax after Blue (the Border Collie) burned her for another 40-yard completion and my wife hollered, "You need a new hobby!"

"What I need is a better pass rush!" I replied as I made another throw. Blue broke for the Frisbee and K-Jax got a mouthful of Border Collie tail in a vain effort to stop another completion. Blue got upset and went all Alpha dog, so I decided to cut the session short before K-Jax got the Finnegan beat out of her.

"Dogs don't play football," my wife said as we headed back inside.

"That's not gonna help K-Jax's confidence," I chided her. "And with the lockout, what else am I gonna do?" Then I sat down at my computer and saw Battle Red Blog's latest headline: "Interested in Becoming a BRB Writer?"

Hmm, I thought to myself, maybe I should put my dream of an all-dog Frisbee/Football squad on hold for a while and try this instead. Then again, I haven't always been the best Texans fan. Although I used to have season tickets to the Oilers, I've never attended a Texans game nor purchased a jersey. I mourned the loss of the Oilers and was thrilled when Houston got a new franchise, but my interest waned from 2003 to 2007.

I wish I could blame David Carr for me losing interest, but he's been blamed for enough already (I still think those pictures of him on the grassy knoll are Photoshopped!). Maybe it was coincidence that my interest was piqued when Schaub joined the team or maybe I finally saw something special in Mario Williams (full disclosure: I admit to being one of the seven people who wanted the Texans to take Reggie Bush and I have no problem admitting when I'm wrong. Then again, I could stare at Kim Kardashian's butt for hours, so maybe I wasn't THAT wrong.)

Nevertheless, my return to football fanaticism didn't happen until the 2009 season and I think it had more to do with my own situation than the Texans. My employer for the last 10 years was facing bankruptcy and I was facing the dreaded mid-life crisis. Many of the usual mid-life courses of action were not viable, considering my shaky financial future. Besides, isn't poring over stats and game film more fun than racing around in a Ferrari with a twenty-something year old with a boob job? At least that's what my wife kept telling me, but if that twenty-something year old happened to be Rivers McCown, maybe she's wrong.

Anyways, my renewed Texans football obsession eventually led me to BRB, where I've been mostly lurking for the last year or so.  I might not be an ideal candidate for Texans team historian nor have an intimate understanding of pro-style playbooks (like Cam Newton), but I do have a burning passion for NFL football and writing that neither old age nor medication will cure. Then again, maybe I should get a second opinion about that burning thing...

I may not always be the smartest guy on BRB, but I plan to work like Zac Diles to earn my spot. I'll always strive to be funnier than I am self-righteous and although I might lack K-Jax's competitiveness, I do have top end googling speed. Now, if I can just parlay this gig into some coaching for my little K-Jax by Wade Phillips, maybe I can salvage my canine secondary. 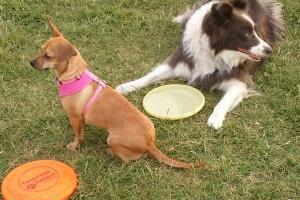