How I Learned To Stop Worrying And Love The Elephant

Share All sharing options for: How I Learned To Stop Worrying And Love The Elephant

A couple of weeks ago I heard that Wade was planning to move Mario Williams to weak side OLB as he retools the Texans broken defense. Before I knew what to make of it, every frustrated Texans fan with a twitter account, blog or access to a call-in radio sports show was howling that this abominable experiment was doomed. Just as Warren Sapp recalled Wade Phillips' resume and made me feel better, Willie McGinist laughed at the madness of this idea and anyone foolish enough to even consider Wade's past success as a factor. Silly Sapp. Silly me... watching the NFL channel, so I decided to get a broader view.

Everywhere I looked on the inter-webs, the villagers were gathering their pitchforks and torches and the pundits were spurring them on towards Dr. Phillips' evil laboratory. Making a premier DE into an OLB who must play in space and cover Dallas Clark, OMG! Are you mad? Mario is just a big, dumb DE and he'll never learn another position, especially since there's a lockout! Mario can't cover Larry Fitzgerald! It's a communist plot to make the JJ Watt pick look more rational! Mario can't run while standing up - he must crouch first! My head was left spinning. Jump if you dare to see how I learned to stop worrying and love the Elephant...

Over the next few days, my fear for the Texans defense stewed but I began to find glimmers of hope. Warren Sapp called his buddy, Pancakes McClain, in Houston who reassured him that Wade knows what he is doing and swears that Mario won't be dropping into coverage much at all. That made me feel better until McGinist laughed at Warren, me and anyone else drinking Wade's kool-aid again. How could I be so stupid?! Damn you Sapp and Pancakes! How did they know that was a combination I couldn't resist?

Willie pointed out all the obvious things I missed. How would Mario learn a new position after 6 years in the NFL? Sure, McGinist did it as a rookie, but that's because rookies are smarter if they're named Willie McGinist! So what if Demarcus Ware only dropped into coverage 6 times last season? It's like Willie says, just because Wade tells Mario not to drop into coverage doesn't mean the offense won't change his mind. I know Peyton Manning can be persuasive (especially after that night in Vegas in '98) so of course he'll have Mario dancing a jig if he prefers. Ok, so maybe Sapp and Pancakes are singing the gospel and Willie isn't the genius I thought?

Then I remembered what my grandmother used to tell me all the time: "Shut the hell up and go do something quiet!" So I decided to go read football stats because I know that would piss the old hag off.  Did you know that since 2004 OLB's Demarcus Ware (DAL '07-10), Greg Ellis (DAL ‘07), Shaun Phillips (SD '06), Shawne Merriman (SD '05-06) and Steve Foley (SD '04) all posted double digit sack seasons in Phillip's 3-4 defenses? At least that's what Vic Carucci over at NFL.com says.

That kind of recent history has many like myself singing Wade Phillips' praises to the tune of Houston making their first playoff appearance next season. I'll wait for you to stop laughing...

Even if you don't drink that much kool-aid, everyone just KNOWS Wade is bringing his celebrated 3-4 to Houston. All the pundits on ESPN and NFL network say so. All the reporters said so. Even the people who want Houston to keep the 4-3 seem convinced.

But, I don't recall Wade ever telling us he was installing a 3-4 per se. I do recall him saying he would craft the best defense he could with the talent he has. Which fits his and his father's M.O. Bum Phillips originally developed his modified, one-gap 3-4 for the Oilers when they lacked true, two-gap defensive linemen in the ‘70s. The Phillips boys run with the horses they got.

In spite of all the cries for a traditional NT, most Texans fans (and Wade Phillips fans) know that Wade's defenses typically utilize one-gap assignments for the DL (due in no small part to the overall lack of quality, two-gap players). That is traditionally a 4-3 characteristic. So rather than assume (like so many others are doing) that Wade is going to deploy some mutant form of the 3-4, I wondered...

What if he is truly trying to build the ideal defense for the personnel he can assemble? What sort of monster would he craft from those appendages? Would it be greater than the sum of its parts or just another mishmash of square pegs into round holes? Would it send QBs into fits of terror or just enrage the local villagers?

In my quest for answers I stumbled across an excellent series on the history of defensive formations in the NFL by Jene Bramel last fall in the NY Times. Bramel is a writer at Footballguys.com. While discussing the evolution of the 4-3, Bramel mentioned "a hybrid defense that combines both 3-4 and 4-3 concepts to highlight a roving pass rusher as the centerpiece of an aggressive front seven" that Pete Carrol brought to Seattle last season. Bramel called the formation a "4-3 Under with an Elephant". The Elephant is a featured pass rusher who moves freely about the front seven looking for mismatches to exploit from a 2-point stance.  Sound familiar? Apparently George Seifert had this idea before Wade Phillips and Pete Carrol and featured guys like Charles Haley, Chris Doleman, Rickey Jackson and Tim Harris in the Elephant role in San Francisco in the ‘90s.

Pete Carrol used Chris Clemons in the Elephant role last season and he racked up a career high 11 sacks. The previous five seasons Clemons only averaged 4 sacks per year. While there will most likely be lots of differences in Wade's version of this formation, the Elephant role seems the same. Except Wade has Mario Williams for that role and Pete Carrol was stuck with Chris Clemons, a former undrafted free agent journeyman, as his best option. If Mario's numbers project anything like Clemons' he would see over 20 sacks next season (not that I see that happening, but that would be proportional to the increase Clemons saw after moving to the Elephant role.)

If mentioning the "4-3 Under" evokes painful memories of the recently departed Frank Bush, consider this: What if Wade isn't really creating a new Frankenstein and instead he's just perfecting what the Texans already have (and not throwing out any babies with Eugene Wilson)? What if he looked at the defensive roster and came to a similar conclusion that Bush did (I know that's frightening, but it wouldn't be that odd really). That doesn't mean we're doomed to the same level of incompetent coaching, defensive play calling or more Eugene Wilson. And the addition of Mario as the Elephant could be huge (nice pun, huh?). Does it matter if we call it a hybrid 3-4, a 4-3 Under or a 5-2 modified formation?  Would a rose by any other name smell as sweetly, even if that name reminded you of Eugene Wilson? (Triple EW paragraph bonus!)

As Bramel notes, "With the Elephant rusher in a two-point stance and the strong side linebacker usually near the line of scrimmage as another capable pass rushing option, these defenses look like a 5-2 or 3-4 front." So, maybe that's why Wade recently called his formation a 5-2. 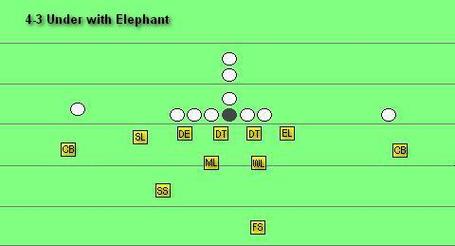 Bramel goes on to point out, "It's somewhat of a semantic argument because there will be four players in a two-point stance behind three down defensive linemen, but this front is more like a 4-3 than a 3-4 because of how the three linemen line up. The lineman to the inside of the Elephant rusher is aligned as a 3-technique, something that you won't see in a base 3-4 set. This look is essentially a 4-3 Under with a standup defensive end."

So call it whatever you want. I think coaches and players care more about assignments than how people categorize their defenses. What Wade does care about is putting the best players he can on the field with the best scheme for their talents. After studying enough film, Wade must have realized Mario would make a better Elephant than anyone in the draft. I don't blame him. So, Wade picked up JJ Watt to fill the 5 technique role (e.g. Red Bryant in Seattle) and free Mario up to roam like the 6'6" Elephant he was born to be.

Thinking of Mario as the Elephant eases my apprehension when the Willie McGinists of the world won't shut up about Mario dropping into coverage. As a matter of fact, I love thinking of Mario as a renegade Bull Elephant looking for a QB's village to terrorize. Now, Wade just needs to come up with a catchier name than 5 tech guy for JJ Watt... how about Rhino? Honey Badger? Maybe Wade should give everyone critter names and we'll call it the Zoo defense... just as long as he doesn't want to call the CB spot "The Chiweenie".

In case anyone wants to read any of the seven-part series, Guide to NFL Defenses, by Jene Bramel in the NY Times: