Share All sharing options for: Putting Vince Young In Context

Every now and then,1 I find myself pondering some of the important questions of our lifetimes as football fans. Questions like "How does the concept of diminishing marginal returns play into draft strategy?" Or "If Rick Smith did not show up to work for three months, would anyone even notice?" Or even "Did Clay Walker record 'Football Time In Houston' as some form of meta-humor, knowing that it would be played as a pregame video every week despite being the least inspiring stadium song since ... ever?"2

Or, most recently, "Just how terrible of an NFL quarterback has Vince Young been to this point in his career?"

First, take a look at these two players' stats per game played:

Just based on those numbers, you'd be hard-pressed to say that one was demonstrably better than the other.  Even their career ratings (75.7 and 74.9, respectively) seem to agree that there's not much difference between them.3

Well, if Player 1 is (predictably) Vince Young, then who is Player 2? 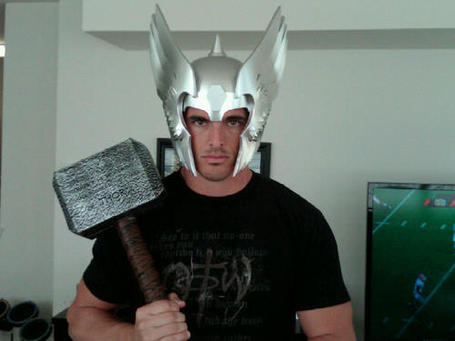 "But wait," you might be saying if you are the type who speaks aloud to his computer while reading a blog, "it's not fair to compare career totals here because that penalizes the players for games where they might have only appeared as a backup!"  Fair enough.  What if we look only at their numbers per start?

Though Young has thrown .17 fewer INTs per start, while Carr has 10 more yards and the tiniest edge in TDs, it is still pretty difficult to say that one has been demonstrably better than the other.  But what about rushing numbers?  After all, Young creates with his feet, right?

Young is better here, to the tune of a whopping 1.8 carries, 12.3 yards, and .16 TDs per start.  That difference matters, of course, but is it dispositive to the issue of which QB is better?  Projecting the per-start numbers we've got here over a full season of starts, we can see the comparative difference the rushing makes:

Here's the thing, though: it doesn't really matter if the rushing edge proves that Young is the better QB here because he's being compared to David effin' Carr.  Saying you are slightly (and ONLY slightly) better than David Carr is like saying that you are slightly more popular than genital warts or that you are slightly funnier5 than Jeff Dunham.  No one in his right mind who wasn't also related to David Carr would suggest that Carr has been a "good" QB by any stretch.  At best, Carr has been "occasionally adequate" or maybe "not the worst QB in the league," but he's never been good.  He's certainly never been worthy of being picked first overall (or even third overall behind a great DE and a glorified punt returner).

I realize that I am not really breaking new ground here: the bloom came off Young's rose long before today, and that fact generally accepted by all but those infected with the most virulent strains of VY-Fanboy-itis.6  All the same, even among people who admit that Young has been a disappointment and has not become a good NFL QB, I have not heard many put Young's failure in context.  And, at the risk of being pedantic, the context is this: if David Carr is a bust (or a failure), Vince Young is a bust (or a failure).

Could Young still become a successful NFL QB?  I suppose.  But we heard the same thing when Carr left Houston, and Carr wasn't leaving a team that had consistently bailed out his poor play with a stellar defense.  Unless Young lands on a team that is similarly capable of keeping him on the right side of the scoreboard, I can't see how (or why) he would ever be given enough snaps to develop.

1 Read: usually when I am very drunk.

2 I'm going to go out on a limb and say the answer to this one is "no." After all, we're talking about a man who unironically sang the lyrics "To Mama, 'fore she was Mama / In a string bikini in Tijuana / Won't admit she smoked marijuana / But I saw Mama, 'fore she was Mama" and who came to the conclusion that Jesus was a country boy because "he never had a million dollars or wore a lot of stylish fancy clothes."

3 No, I am not a huge fan of rating. In fact, I kind of hate it. I only include it here as a measure of how similar the players in question are, however.

4 I did not include fumbles/start in the second stats because there was no easy way to locate it, and I am far too lazy to go each game's box score.

6 The most common symptom of VY-Fanboy-itis is raving incoherently about how Young "just wins games" and pointing to his 30-17 record, as if his play was the cause of that result. To those infected with this terrible, terrible affliction, Young appears to have intangible qualities that allow him to will his team to victories despite his failing as a QB.  It shows you just how sad the disease really is when someone you know is finding a lot of wins hidden in being a whiny, uncoachable headcase.