Thinking About A Rookie Wage Scale

Share All sharing options for: Thinking About A Rookie Wage Scale

You've all no doubt read that there has been some positive movement of late on the new Collective Bargaining Agreement. Obviously we all hope that the two sides will come to an agreement soon so that the business of the season can start. There are a lot of unknowns right now, but let's assume for one moment that a new CBA will happen.

One thing that seems fairly certain to happen, based on all the reporting I've read as part of a new agreement, is a rookie wage scale. This could have a profound impact on how teams look at the draft. Of course, we won't really know how draft strategy will change until we have a few post-CBA drafts under our belt. But hey, it's the offseason, and a particularly slow one at that. Why not pass the time engaged in idle guessing games about things that may not come to pass?

With that in mind, why don't you all get on your toes and hop with me across the jump? Mindless speculation awaits!

As it stands now, the structure of the draft and the NFL salary system front loads the money early-round draft picks make significantly. A few years ago, a bunch of economists from the University of Chicago did a thorough study of the model and graphed it. You can see the graph below. 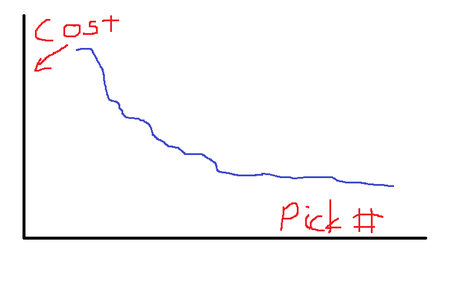 It's kinda complicated and hard to interpret, so let me know if you need any help understanding what's going on here.

The upshot of all this is that teams have invested a whole lot of money in the early picks. This has had led to two things happening: teams very rarely trade out of the first few picks in the draft because no one is willing to trade with them; and smart teams (like the Patriots) have traded back to pick up more players for less money.

Let's talk a little about my first point. Take a look at the list of all first overall picks in the draft. You might notice that other than 2001 (when the Falcons traded up for the rights to Mike Vick) and 2004 (the year the Chargers traded the first overall pick to the Giants) you would have to go back to 1983 (Elway going from the Colts to the Broncos) to find the next instance of the top pick getting traded. With few forces limiting the ceiling of the first overall pick's salary, a ton of money gets wrapped up in one player. As a result, the first overall pick carries with it a huge risk and few teams are willing to take that risk unless they have to.

If we do end up seeing a rookie wage scale in the near future, this dynamic could change. If contracts are capped at a certain amount, you're likely to see more teams interested in trading up to higher picks because the financial risk is not as high. Likewise, because there is much stronger limitation on the amount a player's agent can glean from a team, you're less likely to see a JaMarcus Russell-style holdout.

The other change that I think we'll see is kind of related to this. In the past, teams that have traded back have gotten much more value for their pick (value being price/quality) in the late first round through mid third round. The basic theory is that, while the players are better in the top few picks, you can get more players that are almost as good for a whole lot less than, say, the first overall pick. Again, this is related to the almost geometrically higher salaries paid out in the early part of the first round. If a rookie wage scale comes along and flattens this curve out significantly, the smart teams will have less incentive to trade back and more incentive to move forward in the draft. The extent to which they do this really depends on how flat the curve is. If it still looks like the ski jump that is the current situation, there isn't going to be much at all. But if it's more like a bunny slope, then you're going to see the smart teams wheeling and dealing and moving up a lot more.

If you're a draft day junkie, I think you're going to like having a rookie wage scale. Lots more action. Hell, if you're a football fan, you're going to like it because it means that there's a new CBA in place and we can actually dust off our bleach supplies and watch our team again. Let's hope it happens soon.