What the H? Why James Casey's Replacing Vonta Leach Is A Good Thing

Share All sharing options for: What the H? Why James Casey's Replacing Vonta Leach Is A Good Thing

There are three things that I, both as a blogger and as an overly opinionated fan, have longed to see from your Houston Juggernaut.  The first is creativity on defense, where players are put in a position to succeed by surprising the offense.  This longing made the Richard Smith / Frank Bush eras especially painful, but my prayers to Durga were (apparently) answered when Wade Phillips mercifully replaced Frank Bush.

The second hope was to have one player who could both kick and punt, thus freeing up a roster spot that other teams don't have.  Alex Henery, despite being a filthy Cornhusker, was my dream foot-based-football-activity player, but, as of this writing, this dream remains deferred because of the paucity of college kickers/punters who handle both roles well.

The third hope --- and the subject of this post --- was that, given the myriad TEs on the Texans' roster from year to year, Gary Kubiak would find one who could function as an H-back / FB hybrid, thereby providing the Texans more options in the passing game than a standard I-formation or pro-set formation would.  It was this last hope that had me positively giddy about the possibility of moving James Casey to fullback.

Now, while last Monday's game did not feature Casey in a pure H-back role, I remain positive about the move nonetheless.  After the jump, we'll define just what an H-back really is and take a look at how Casey could thrive in this role if given a chance.  Then we'll give each other high fives and agree about how terrific the Texans' offense is.  There could very well be off-color humor and beer, though probably not in that order.

OK, at the risk of being pedantic, let's make sure we're all on the same page about what an H-back really is (and is not).

The true H-back was not created to be an extra weapon in the passing game; it was drawn up to provide an extra layer of blocking protection.  The H-back is, generally speaking, a remnant of Joe Gibbs' attempts to keep Lawrence Taylor from snapping the limbs of Redskins' QBs.  In the face of Bill Parcells' 3-4 defense, from which Lawrence Taylor had free reign to murder people, Gibbs realized that a second TE was in a better position than a traditional FB to slow Taylor down.  Thus was created the modern two-TE set.  In response, Parcells did two things: he aligned Taylor wider in relation to the Center, so that Taylor had a better angle around the in-line TE, and he moved Taylor between the two OLB positions based on which TE was a less-capable blocker.

In response to this, Gibbs realized that he could put the second TE in motion, shifting him to Taylor's side, just outside the in-line TE (and a step off the line for NFL eligible-receiver-rules purposes).  Alternatively, Gibbs could have that same second TE slide from the in-line TE position to the FB position in an offset-I formation.  In either case, the H-back's job was simple to define (if terribly difficult to execute): be the last line of defense against a QB-seeking crazed dog.

You may be wondering why Redskins' QBs seemingly needed more time in the pocket than QBs on a lot of other teams.  Recall that, at the time, the Skins had the Hogs on the offensive line.  Power running was the short- and mid-yardage weapon of choice.  Gibbs saw the passing attack primarily as a deep weapon.  Deep routes obviously take longer to develop.  Other teams who adopted the H-back idea, however, soon realized that moving the second TE --- especially when he slid into a FB position --- made it difficult for the defense to jam him and frequently caused defensive mismatches, making it worthwhile to sneak the TE/FB hybrid into passing routes.

Depending on how you define H-back, the position has either evolved over the years into something vastly different from its original design, or it has disappeared, and the label is thrown around incorrectly by the media, who attach it to every TE with a number in the 40s.   But that's really just semantics; I'm sticking with H-back over TE/FB-hybrid both for consistency and because it sounds better.

No matter what you call him, the fact is that the guy playing that role has a different purpose and skill set than the original H-backs did.  These days, an H-back is primarily an offensive weapon who can (and will) line up anywhere from the fullback position to slot WR.   The modern H-back uses motion, alignments, and their combination of speed and receiving skills to find holes in zone coverage and/or exploit mismatches in man coverage.  Size-wise, they tend to be slightly taller than your typical fullback and lighter than your typical TE, making them too small to be dominant in-line blockers, but not too small to be effective lead blockers.  It also allows them to create problems for opposing defenses by being too big for a nickel corner or most free safeties and too fast for most linebackers.

For teams that utilize a traditional TE, one might argue that the H-back is unnecessary or (at the very least) less effective than a traditional FB would be; such arguments overlook the most important benefit an H-back brings to an offense --- flexibility.  Consider the following possibilities all from a single 2-WR, TE, RB, H-Back package:

You can use the H-back as a traditional lead blocker, both outside and inside, and he'll likely have the speed to lead block to the weakside even when starting in the offset-I. 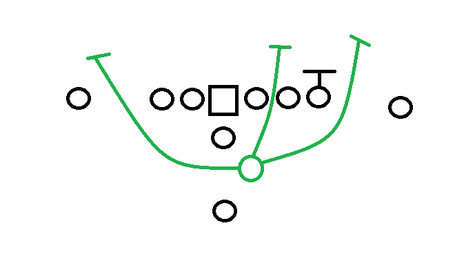 However, because he's theoretically faster and a much better pass-catcher than a typical fullback, he creates a great mismatch on play action, and he allows your other TE and the nearest WR to come off the line and aggressively run block to better sell the play action: 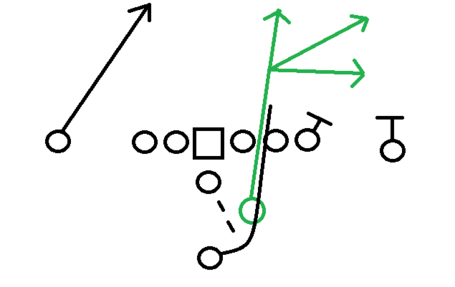 Or, from the same offset formation, you could slide both backs out into the flats, where the H-back's speed/hands advantage over the fullback makes him a better target and should lead to more yardage after the catch: 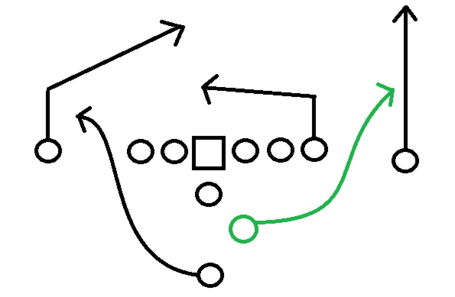 But playing a fullback-type role is only half of it.  Using the same package of players, the H-back could lineup as a second TE rather than a fullback.  All of the sudden you have 8 gaps that a defense has to account for and you have four quick pass-catching targets.  It's nearly impossible for a defensive front seven playing a one-gap system to account for 8 gaps and maintain their coverage responsibilities.  But, since you can run or pass out of this formation equally well, you force the defense's hand to a certain extent.  You also have added protection against the edge rushers in a 3-4. 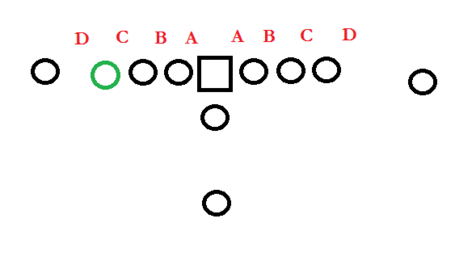 This double-TE set allows you to exploit the biggest weakness of a Cover-2 scheme --- the deep seam.  With an athletic TE and an H-back, a defense has no way to know which of the two is likely to attack the seam and which one is going to run a different route.  This forces a moment's hesitation by the deep safeties. As fans of the Texans know all too well, hesitant safety play is often equivalent to no safety play at all. 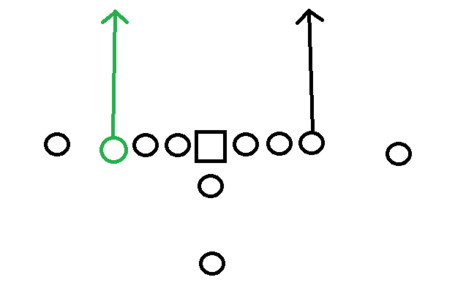 The H-back as a second TE, because he's a legitimate option in the passing game, can also make life easier for the WRs, especially WR1s.  An easy example of this would be putting the H-back next to the TE, then sending them on routes that force the deep safety to cover one of them.  Let the WR1 run a sluggo route and you've likely created single coverage on the outside. 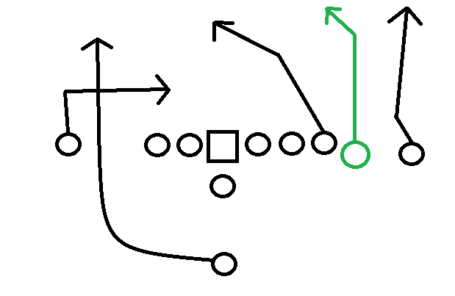 That's a power running play, a running play in a two-te/no-fb set, a passing attack against a typical cover-2, a double flats play that should be far more effective than a FB in the flat, and a way to attack a single deep safety and get your best WR single coverage (or leave either the TE or H-back open), and it's all run with the exact same personnel grouping.  A defense matching up against that package wouldn't have any idea whether they needed a nickelback or a third linebacker.  And it's all possible because of the H-back.

Applying all of this H-back theory to the Texans, we come full-circle to one James Byron Casey.  Despite technically going into the 2009 draft as the #1 rated fullback on many boards, many Texans fans have scoffed at the idea of Casey playing fullback in Kubiak's offense.  After all, the thinking goes, Casey is no Vonta Leach; he's not going to destroy linebackers and inspire references to Friday and earn a nickname like The Human Coke Machine.

And those thoughts are true.  They're also largely irrelevant.  Indeed, we've already covered how the importance of Vonta Leach to the Texans' running game last year was largely illusory.  Arian Foster demonstrated emphatically that he did not need a lead blocker in most situations. So why not replace that traditional lead blocker with an H-back that gives an already explosive offense even more options?

If you've come to terms with the fact that Casey does not need to fill the role formerly held by Vonta Leach, then the only arguments against putting Casey in at H-back would be (1) you don't think he can play H-back or (2) you don't think the team needs an H-back or FB at all.  As to the latter, that's just, like, your opinion, man.  (Seriously, that's a philosophical difference, not an argument against Casey, and, given the Texans' coaching staff, it seems like a fairly worthless argument to make.)

While the sample size of NFL catches for Casey is too small to draw concrete conclusions from, it's worth noting that he has a higher YPC over his first two seasons than either Cooley or Clark did.  (Again, Cooley and Clark had many, many more catches, so in no way am I suggesting that this stat proves much beyond that his YPC does not suggest that he CAN'T match Cooley/Clark output.)  Additionally, using the last year of college stats for each, Casey measures up quite well:

Again, these stats are not perfect --- Casey played on a Rice team that allowed him to line up at TE and all three WR spots, and he was unquestionably the #1 target on that team, whereas Cooley and Clark were TEs on teams that weren't exactly pass-first in nature.  That said, the fact that James Casey could be the #1 receiving option on a college football team, even Rice, and then enter the draft as a FB/TE, kind of supports the idea that he's athletic enough to be an H-back.

Long story short, the question isn't "can Casey replace Leach?"  It's "can Casey be utilized in a way that makes him more valuable to the offense than a regular blocking FB would be?"  Based on all available evidence, I would have to say yes, and I really, really hope Kubiak gives the H-back role a serious look.

(Bonus: Installing an H-back gets us a little closer to my current dream --- a three-TE power/spread.  /foreshadowing)