Glorious And Exalted Leader touched on it in this post earlier today, and it's been patently obvious to anyone who has watched more than five minutes of either preseason game, so I am not exactly breaking new ground when I say that the Texans' run defense (especially up the middle) has been about as effective at stopping penetration as a cellophane chastity belt.  Well, I have good news and I have bad news about that.

The good news is that the problem is easy to diagnose.

First, let's take a peek at how Wade Phillips' defense is supposed to work when it comes to defending runs between the tackles. 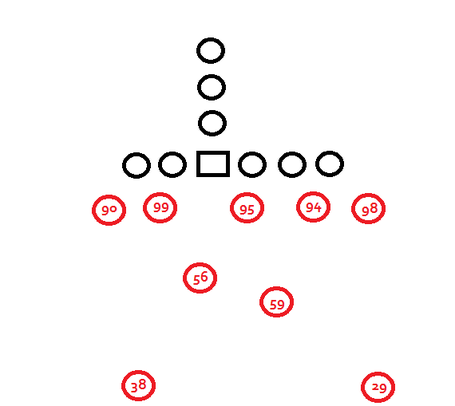 The first thing that should jump out at you is that the defensive front three do not spread evenly across the offensive front.  J.J. Watt is lined up in a 3-technique position, on the outside shoulder of the right guard; Shaun Cody, your nominal nose tackle, is in a 2i-technique position over the inside shoulder of the left guard; and Antonio Smith is playing the 5-technique outside the left shoulder of the left tackle.  This alignment leaves a noticeable space over the right-side (from the offense's perspective) A-gap.  (Note: I've seen Cushing in both the SILB and WILB positions, so feel free to flip-flop the ILBs in your head if that better fits your preconceived notions.)

This alignment is based on how Wade's one-gap system works in a best-case scenario.  To wit: 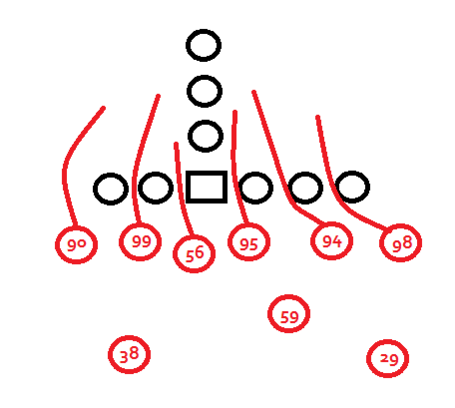 When working properly, Wade's system of run defense is deceptively simple.  The OLBs take the C-gaps (or maintain backside discipline if the run is away from them), the DEs take the B-gaps, and the NT takes one A-gap.  The other A-gap is filled by one of the ILBs (in this example, Cushing).  The other ILB plays the middle, shaded slightly toward the strong side in case the run is a counter, and both safeties come forward in position to collapse to the middle or get to the edge if necessary.

Gaps plugged, run stopped, high-fives and chest-bumps for all!

When it's not working properly, however?  Well, then you get what you saw on the Saints' first play from scrimmage Saturday night: 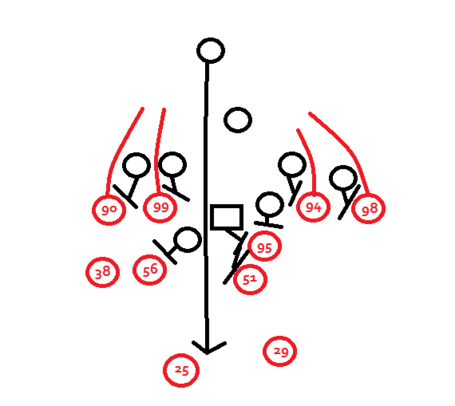 The entire problem starts at the nose.  Rather than shoot his gap, Shaun Cody gets hit by the LG and C, and blocked harmlessly out of the play.  At the same time, the lead-blocking FB hits Cushing, preventing Cushing from getting penetration at all.  Sharpton Adibi (who I misidentified as Sharpton) shooting toward the same gap that Cushing was trying to fill, gets caught up in the wash and can't get there.  Pierre Thomas, following his lead block, has no problem getting to the second and third level, and he gains 13 yards before being brought down by Kareem Jackson.

It doesn't exactly take a rocket surgeon to diagnose the problem(s) here.  First and foremost, Cody's inability to be a factor on defense takes on a whole new level of importance in 2011.  If he can't penetrate --- the one time the Saints let him so as to better set up the screen notwithstanding --- he's literally worthless to this team.  Actually, that's not even true.  If he's getting blocked out of every single play (and he is), he's bringing negative value to the team.

Second, Cushing has got to fight through lead blocks more effectively.  He almost seemed surprised to get popped by the FB on this play --- the hit stood Cushing up and the play just went right by him.  At the same time, this is related to the Cody problem; when he gets blocked out of the play from the snap, the hole through A-gap is so wide, it could be a Kardashian.  On top of which, if the NT were getting penetration, the timing of the play and the efficacy of the lead block would be altered.

Third, Adibi took a terrible angle on his blitz and let himself get blocked out of the play rather than maintaining assignment discipline.  I chalk that up to being overly excited on the first play of the game, so it's much, much less of a worry in my book.

So, what to do?  Or, to quote Ray Zalinksy, "Great, you've pinpointed it.  The next step is washing it off."

Well, the NT problem is fixed to a large degree by playing Earl Mitchell (and I'd even like to see Damione Lewis and Scooter Berry playing that position before Cody).  Mitchell's not Jay Ratliff, and he'll never make people forget about Ted Washington, but he seems to have a much better grasp of his role in this defense and the ability to perform his job duties.  For example, just sticking with the Saints game, on 2-and-10, late in the third quarter, Mitchell rode the Saints' center into the backfield, located the running back trying to go left off-tackle, and make the tackle for no gain.  Sure, it's just one play, and it was against the Saints' B-team, so you have to take it with a grain of salt.  But, still, if Cody is appreciably better than Mitchell, such that Cody is on the Texans' A squad and Mitchell on the B, then shouldn't Cody be able to do something similar against the Saints' A-team as Mitchell did against the B?  Conversely, if the difference between them really is minimal, then shouldn't the edge go to the guy who has at least shown an ability to do what you need him to do, regardless of whether it was the Saints' starters or not?

Don't get me wrong; in no way am I suggesting that Earl Mitchell is a panacea.  Truth is, this style of defense is going to have issues up the middle, regardless of who is at NT.  We've known this all along.  When Wade was hired back in January, I wrote:

Like any defense, Phillips' scheme has its flaws.  First and foremost, the defense leaves the middle open a lot, which can be especially damaging against a power running team.  [W]hen a running back beats the initial wave of linemen and blitzing linebackers, he is pretty quickly into the open, with only the deep safety and (possibly) the closer safety having much of a chance to catch him.

The second flaw, related to the first, is that teams can plan knowing that the middle is going to be open a lot, meaning that teams with athletic TEs or teams who run a lot of slants/dig routes can find success and can base their offense around that hole.  This weakness can be countered somewhat by utilizing the Strong OLB in TE coverage and keeping one of the ILBs home if the other is blitzing, but then you start to negate some of your options in the pass rush.  You can also counter this weakness by generating enough pass rush that there's no time for TE drags or 10-yard dig routes to develop.

Point being, it should not be a surprise that there is some amount of trouble with the middle runs, especially this early in the year.  The surprise, such as it is, is that Shaun Cody has been so absolutely abysmal playing the NT role.  If the team can just address this, preferably by admitting right now that Earl Mitchell is going to be the starter and letting him run with the 1s on Saturday, they'll take a large step toward fixing the glitch.  (You know who else would have been good shooting the gap from a 2-technique NT position?  Hint: his new team plays tonight.  /sigh)

In fact, I'd go so far as to say that I am more surprised by Cushing's struggles against lead blocks.  Or, at least I would be surprised, were these problems not perfectly in line with what we saw from Cushing last season.  You know, like last December, when I wrote:

I suppose that the answer stems, in part, from whatever it is that has Cushing playing generally like a mediocre outside linebacker this season.  Whatever that might be.  You know ... like ... whatever could possibly have had him playing much better last year and is not helping him this year.  Whatever that is.

When you toss DeMeco Ryans' pre-injury question marks last year and the current uncertainty around his recovery, along with the leap of faith it takes to believe that the Xavier Adibi that you've seen since August 15th is more indicative of his ability than the one you saw in the years prior to August 15th, inside linebacker actually is a bigger concern to me at this instant than is NT.  At least the Texans have Earl Mitchell and could, therefore, address the Cody issue; at ILB, the only one I have a good feeling about right now is Darryl Sharpton.

If the Texans have to look elsewhere to fix either or both of these issues, there is still a modicum of talent available in the defensive tackle free-agent pool.  Tony Brown, if he's healthy enough, might relish the chance to play his old team twice this year.  Clifton Ryan should still have a little left in the tank.  Speaking of tanks, Tank Johnson (whom Wade knows and has coached) is out there.  John McCargo was there, until yesterday, which ruined my whole "maybe being back with Mario would be good for him" theory.  Umm ... Pat Williams is old, and not really in the mold of what Wade looks for, but there's no chance that he's not a massive upgrade over Cody, especially in short yardage.

At ILB, the pickings are slimmer (both literally and figuratively, I guess), but there are some options.  My favorite possibility is Channing Crowder, who has recently said that he does not, in fact, want to retire and wants to play in 2011.  Rocky McIntosh is also intriguing to some extent.  And that's about it.

Having said all of that about the Texans' problems and causes, I want to end on a more positive note.  So, no matter what issues the team is having with the run defense right now, a few things bear keeping in mind.  First, they won both preseason games, suggesting that this flaw is not necessarily fatal.  Second, the team is allowing 4.0 yards/carry on 26.5 carries/game; last year, when the Texans had the easiest defense to pass on in the known universe, but the run D seem fairly decent, they allowed 4.0 yards/carry on 27.1 carries/game.  Finally, just to quote myself one more time (posturbating!):

[E]very defense has its flaws, ESPECIALLY THE ONE WE'VE BEEN RUNNING IN TWO SIMILAR FORMS SINCE 2006.  I'll be damned if I am going to let the idea that, "Oh noes, there's a hole in that defense!" prevent me from upgrading the current vanilla-blitzing, terrible-secondary-in-a-stupid-soft-zone, oh-my-lord-why-can't-we-stop-a-single-pass, I-think-I-want-to-die-yes-please-kill-me-now scheme. 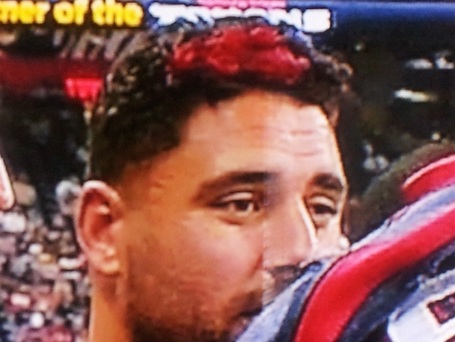 Tangent: What the hell is going on with Cody's hair?  Seriously?!