A few months ago, when we were without hope and football and were left only to our imaginations1, I spent a great deal of time reviewing various aspects of the Kubiak-era Texans.2 So it was that I found myself one Saturday afternoon, sans kids and wife, thinking about Gary Kubiak's fascination with TEs.

Yes, yes, it is always the acme of comedy to work in some observational humor about the number of TEs the Texans have drafted/signed/created in secret cloning experiments that smell of rotting meat when the power level drops at Reliant.  I get that.  But what if, hidden betwixt those uproariously funny punchlines, was a chance to create a new, unexpected offensive wrinkle that is guaranteed to give defenses fits?  Because I think it is.  I even hinted at as much at the end of my post on James Casey's potential as an H-back, when I wrote:

Bonus: Installing an H-back gets us a little closer to my current dream --- a three-TE power/spread.  /foreshadowing

Used correctly, I think you could create a system that gave you tremendous flexibility at the line of scrimmage, allowing you to run when the defense was looking pass (and vice versa) while also consistently creating mismatches in pass coverage.  It's retro and futuristic at the same time, kind of like watching Back to the Future II in 2011.  So take your hoverboard across the jump3, and we'll get into the Xs and Os of it all.

The basic personnel package for the formation is one WR on the weakside, one RB, and three TEs on the strongside, to wit: 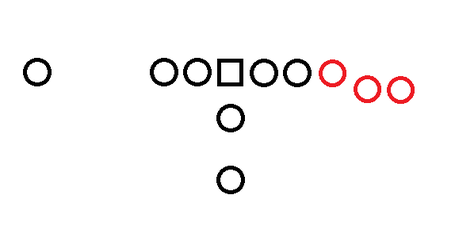 The alternative alignment for the same package simply pulls Casey (or whomever) back into something very similar to a traditional H-back position: 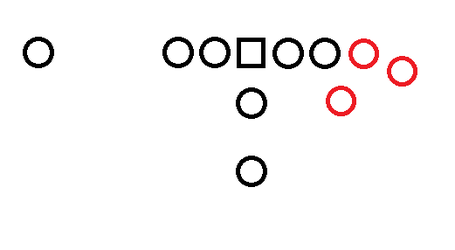 Now, those of you who pay attention to such things4 might have noticed that the Texans came out in the first formation of this package for the first few plays of the Jets game, with Kevin Walter(s) split wide, Owen Daniels lined up next to Eric Winston, and James Casey and Joel Dreessen outside of Daniels.  For just a moment, I thought that Gary Kubiak and I were on the same wavelength, kindred spirits brought together through our mutual love of TEs and innovation.5  "Could it be that mine enye aver Gary's allowance of the theorick of tight ends three?"6

Alas, no.  The three TE formation employed by Kubiak against the minions of the foot fetishist were there solely to slow down the Jets' blitzes and (perchance) keep Matt Schaub upright.  Nevertheless, that Kubiak was willing to roll out that formation suggests, at least to me, that this whole theory is not that far-fetched.  So how would it work?  Glad you asked.

Alright, pretend you are a defensive coordinator.  (Hey, if Frank Bush can do it, anyone can.)  If the opposing offense rolls out with three TEs, all of whom are legit offensive weapons and two of whom (Casey and Dreessen) are average to above-average blockers, which defensive package do you put on the field?  If you come out in a base 4-3: 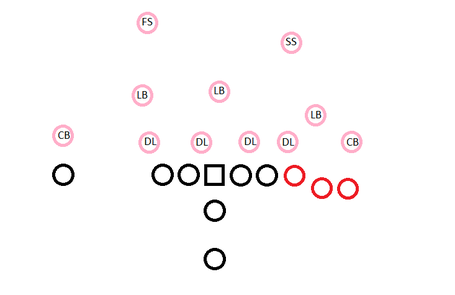 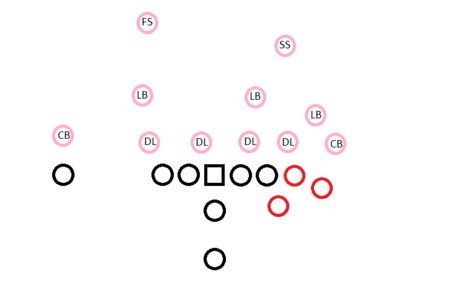 In either iteration of the package, you've got linebackers or (heaven help you) a linebacker and a defensive end trying to cover two of the TEs and you've got a CB on the third.  I've got likely speed mismatches in the first two and a size mismatch in the third.  Your FS can't help out because 99.9% of the CBs in the league will not have much luck in single coverage on Andre Johnson.  If I force your SS to make a decision on which route to help cover, I'm guaranteed one-on-one matchups for two TEs if my RB goes into a route and one TE if he stays in to block and you aren't blitzing LBs.  For example: 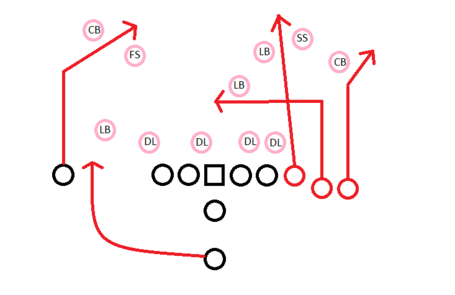 CB1 and FS are worried (rightfully) about Andre Johnson.  The weakside LB has to man cover Arian Foster.  The SLB is being pulled across the middle by Joel Dreessen.  Owen Daniels is running a skinny post against the MLB, almost certainly pulling the SS along too.  James Casey, matched on your CB2, is running a deep corner route, where he'll likely have a 4+ inch height advantage.  Similarly: 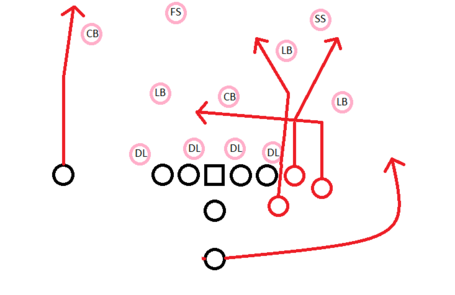 Send Foster on a route to the strongside and now the SLB who was matched up with the inline TE has to react and the SS has to pick up that TE.  Johnson runs a standard deep route, but the FS is forced to choose whether to help the MLB, should the H-Back get underneath him on a post, or help the CB1 with Johnson.  Meanwhile, the offset TE on the crossing route occupies the CB2 and the WLB.

But wait, you (as the DC of the pink team) say.  I'll run a zone coverage out of my base set.  What now, Mr. Three TE Guy?  What now?  I'll tell you what now.  What now is that I treat it like any other zone coverage and attack it by forcing defenders to choose which guy to cover, knowing that, at worst, I'm getting single coverage somewhere.  So, perhaps, this: 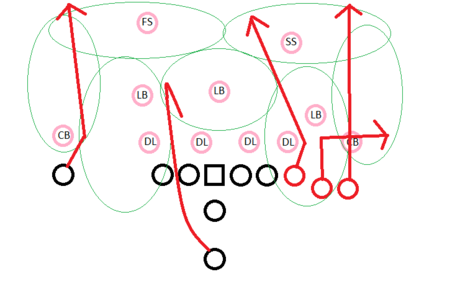 In some ways, this package is even more effective against a zone, especially a Cover-2, because it exploits the weak spot of the Cover-2 (the seams) while also disguising run v. pass.  If your CB2 runs with the outermost TE on the streak route, the SLB has to cover the middle TE on the out route, forcing the SS and/or MLB to pick up the inline TE.  If, instead, the CB2 releases the outermost TE to the SS and picks up the middle TE's out route, the SLB and/or MLB have to pick up the inline TE on the post route, plus I have the window between when the CB2 releases and the SS picks up to throw to as well.  The RB running a hook right at the seam in the MLB/WLB zones creates an added wrinkle for the defense, especially in the scenario where the CB2 releases, because, if the MLB covers the RB, the inline TE is streaking on the post route with a SLB trying to keep up and the FS almost certainly following Johnson.

To this point, we're not doing anything amazing, I know.  You are probably wondering why we'd go to all this trouble to have an unconventional formation if the passing attack is not altogether different from what it would be with two of the TEs replaced by WRs.  The reason --- or, I suppose, one of the reasons --- is because I want you to try to defend this formation as you would defend a three- or four-WR set.  So I abuse your linebackers in the base set until you say, "To heck with it, I can deal with the size mismatches in coverage, but I need speed/cover skills on these guys!"  You trot your nickel on to the field.  I start to get a tingle in my no-no spot. 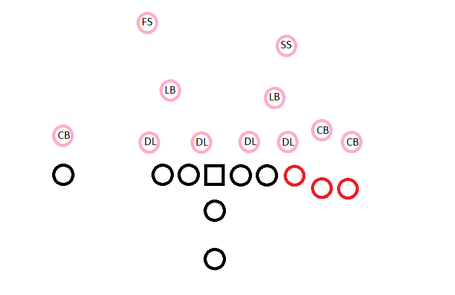 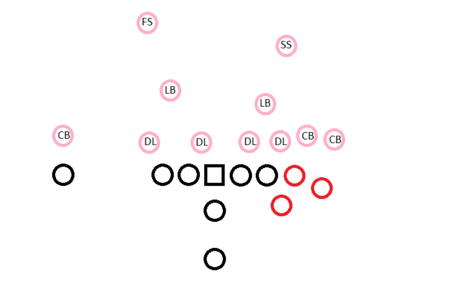 And why are my loins all a-quiver?  Because I see what you've given me.  By trying to stop the pass, you've made it much easier for me to run.  I've got three TEs and three OLs (including the C) blocking against two CBs, 2 DL, and one LB on the strongside.  This makes me a happy camper because, especially with a RB like Arian Foster, it creates so many possible lanes through which he can run. 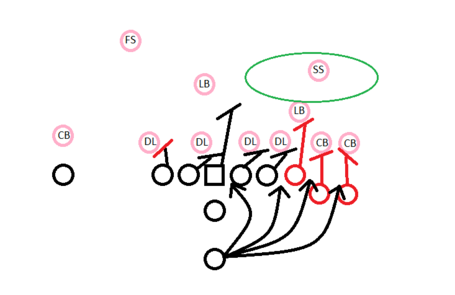 The SS cannot immediately commit to a hole because he has to see where the RB goes first.  My middle and outermost TEs blow up the CBs, my inline TE chips the DE on that side if necessary and blocks the LB.  My C gets up field and blocks as needed or stays home and blocks the RDT.  If the WLB overpursues or starts cheating toward the strongside pre-snap, my RB can even cut back that direction or I can call a designed B- or C-gap run to that side to keep them honest.  I have, basically, forced you into a damned-if-ya-do, damned-if-ya-don't situation; whatever you prepare for me to do, be it run or pass, I do the opposite and do it from the exact same formation.

Which is not to say that I have to always pass when you're in a base set and run when you are in nickel.  (Going dime against this formation is an even worse idea, for obvious reasons.)  Having three TEs to the strongside creates the same dynamic vis-a-vis the MLB and SLB in a 4-3 as would having a single TE and a lead-blocking FB.  On top of which, rather than, say, Jacoby Jones blocking the CB2, I've got a TE on him.  Power running, kicked up a notch.

Of course, all of the plays above are but single possibilities.  The real benefit to this package is the flexibility it allows.  You go with bigger LBs to defend against the power run?  I shift my formation so my TEs move out to WR positions and force your bigger LBs to cover them.

You replace the nickel corner with a third safety?  Better hope he can tackle well in the run game and cover well enough to defend an athletic TE (or, more generally, that he is not Bernard Pollard).

You come out in a 3-4 front?  I keep my RB in to pick up the weakside blitz if necessary and keep one of my TEs as an extra lineman on the strongside, and I've still got three options in the passing game.

You start shifting your defense further toward the strongside to stop the run?  Oops, here's a little play action waggle.

I'm not going to pretend like this is some absolutely unstoppable Tecmo Bowl play.7 Nor am I suggesting that this should be the Texans' most-common base offensive set. What I am suggesting is that this package would provide a new aspect to the offense, would capitalize on the number of fast and athletic TEs on the roster, and would limit the Texans' reliance on Jacoby Jones' hands. Most importantly, it would keep defenses on their heels by disguising run v. pass, which should help both the run and the pass as well as helping an already dinged-up offensive line.

In short, it can't hurt.

3 Don't worry, there's no water between here and there, so you won't need an outside power source.

5 He's on his own when it comes to Aggie-fied sheep lovin', however.

6 Yes, we speak in early modern English at Casa del Campbell. Do you not?