Care To See The Difference Between Earl Mitchell And Shaun Cody?

Share All sharing options for: Care To See The Difference Between Earl Mitchell And Shaun Cody?

Some of us will do our jobs well and some will not, but we will be judged by only one thing --- the result. --Vince Lombardi

Judging solely by the result --- 64 rushing yards and 4 rushing 1st downs allowed, along with no rushing TDs --- it seems odd (and needlessly negative) to say that there were any problems with the run defense.  Nevertheless, difference in opinion over Shaun Cody's performance last Sunday ran the gamut from "abysmal" to "great."  There's no way everyone could be right, right?

My initial reaction to the game was that Cody was pretty bad, while Mitchell was average or slightly better.  (Yes, I know Cody fell on a fumble.  Awesome.  Great.  Blind hog and acorn and all that.)  Given that I still had the game on DVR, I was in a position to confirm --- or disconfirm --- my thesis.  So I went through the game again, focusing entirely on NT play when the Texans were in the 3-4 and the Colts decided to run.

Long story short, I think my initial take was pretty accurate.  After the jump, we'll look at why.

What follows is a screenshot of each play that fit the criteria above: Texans in base 3-4; Colts running the ball.  I've circled the NT and his blocker(s) in each of the pics, too, just to make it easier for you.  Because I love you.  Yes, you. 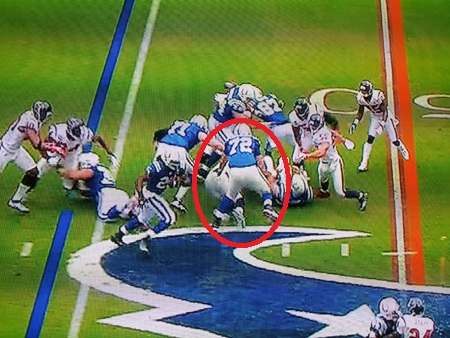 Cody #1.  The run looked designed to go off left tackle, but that side of the line collapsed quickly.  Joseph Addai cut back inside, where Cody (theoretically) was supposed to be.  Unfortunately, RT Jeffrey Linkenbach had not only blocked Cody, but shoved him to the ground.  Addai gained 11 yards. 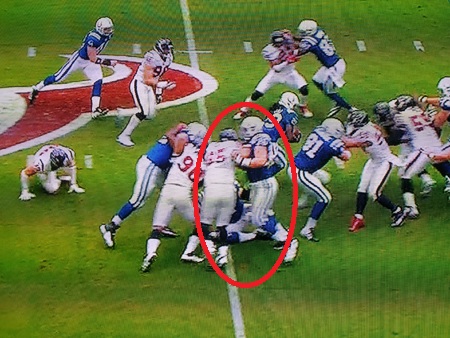 Cody #2.  J.J. Watt got immediate penetration, but missed the shoestring tackle.  This was a designed middle run, and Addai ran directly at where Cody had lined up.  Cody was not there, however, as he'd been ridden out of the play, first by the center, then by the right guard.  Addai gained 1 yard. 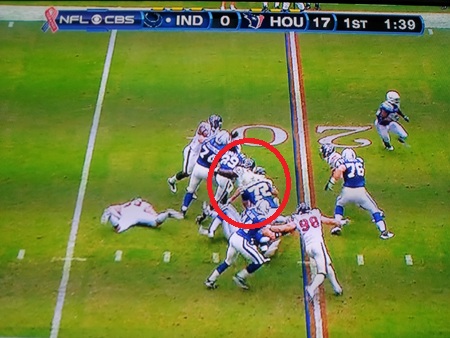 Mitchell #1.  Addai on a draw play looks right, but finds no hole.  He starts to cut back left, but Mitchell gets immediate penetration --- the cool kids call it "shooting the gap" --- and makes the tackle for no gain. 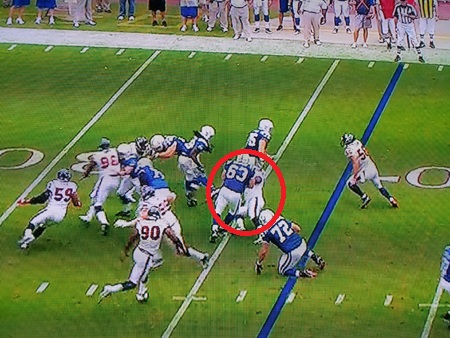 Mitchell #2.  The Colts' line blocks left for a run that looks designed to go through the 5 hole (left side).  Addai stutters steps, the 5 closes, and he bounces it all the way outside.  Cushing has crashed down too quickly, and Addai goes for 13 yards.  Mitchell gets leveled by C Jeff Saturday as he tries to change directions. 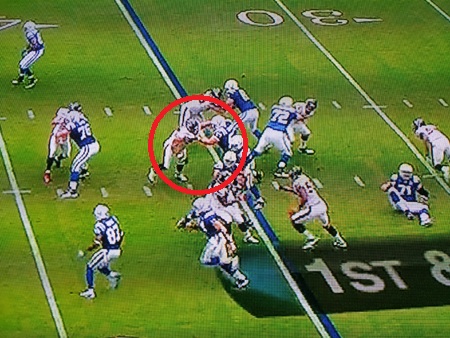 Cody #3.  The Colts are all like, "hey, running up the middle when 95 is on the field seems like a solid plan."  So they do that, and RG Ryan Diem easily moves Cody out of the way.  Cody got free as Addai went by him, but Cody failed to wrap up and missed the tackle, and Addai went for 7. 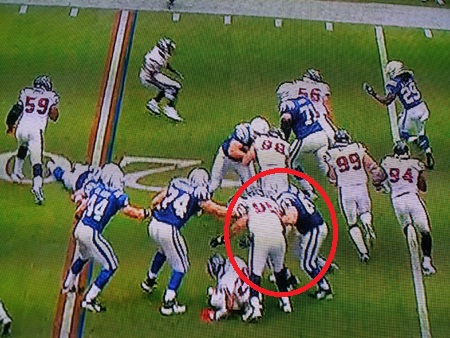 Cody #4.  Indy lined up with three WRs clustered on the right side, and the run was a designed pitch to Addai to the outside.  Linkenbach and Saturday neutralized Cody immediately with minimal effort.  (Notice that Cody is the only one of the three D-linemen who didn't easily get free and chase the play.  Notice, too, that neither O-lineman is really putting much of a block on him.  But I digress.) 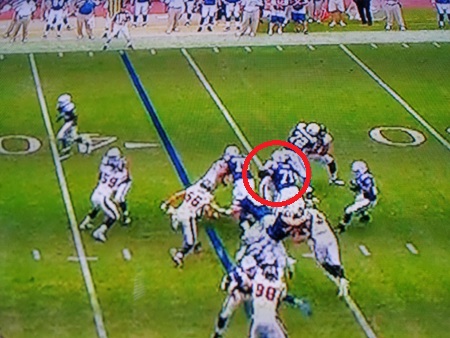 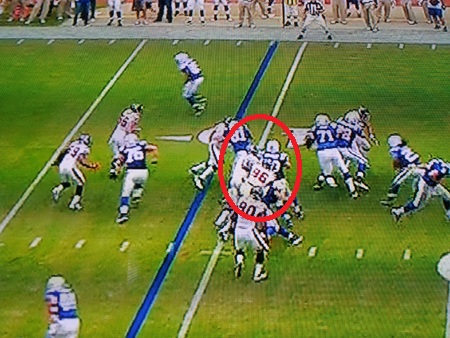 I'm fudging a tiny bit here, only because TE Jacob Tamme got called for a hold, so this play did not actually count.  Still, this is a run that was designed to go to the 4 hole (note Diem looking second level through that hole).  However, DE Tim Jamison (GO BLUE!) gets penetration and Mitchell holds the point of attack, pushing Saturday into Addai's path.  Addai then bounces the run to the outside, where Cushing and CB Johnathan Joseph tackle him for no gain. 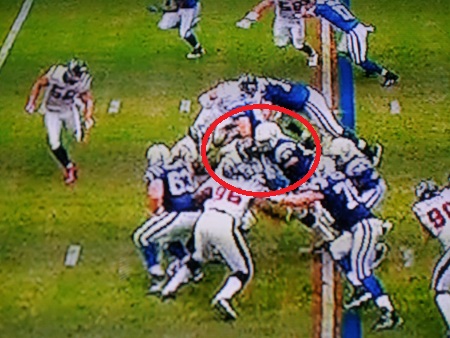 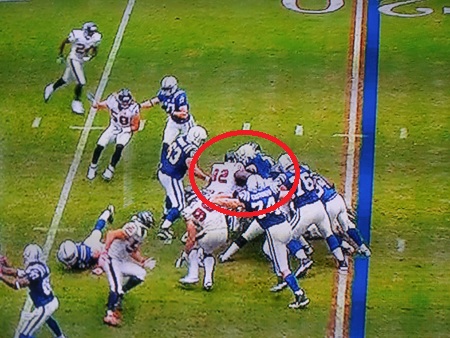 Mitchell #4.  I used two pictures here to demonstrate what I think is the key difference between Cody and Mitchell.  Here, Mitchell tries to shoot the A-gap to Jeff Saturday's right, but Saturday, looking to the second level, gets in Mitchell's path.  At the same time, Ryan Diem, blocks Mitchell on a trajectory nearly perpendicular to Mitchell's trajectory.  Despite being knocked off balance, Mitchell rights himself quickly without falling and manages to hold the point on the run.  Delone Carter manages only two yards as Mitchell helps cause a pileup at the point of attack. 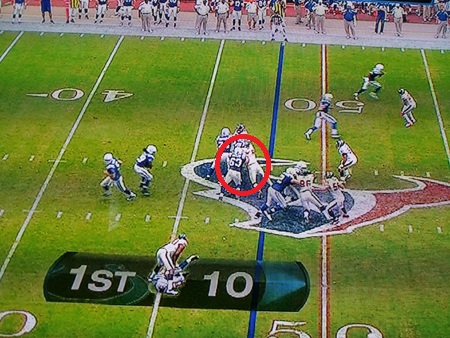 Cody #6.  To his credit, Cody tries to shoot the A-gap to Saturday's left on the snap.  Unfortunately, Saturday immediately renders Cody moot, blocking him to the offense's left.  Linkebach also moves Anderson out of the way, but Addai managed only 2 yards as Cushing and Mario recovered quickly and shut the play down. 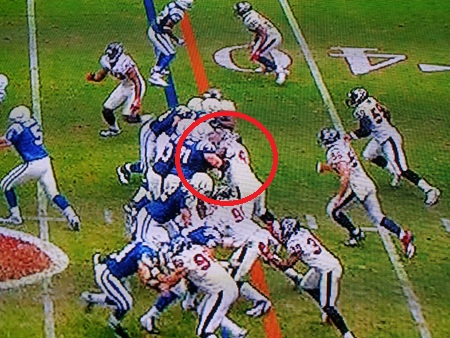 Mitchell #5.  In the above picture, you'll see something that the Colts did not do against Shaun Cody --- double-teaming the NT with Saturday and Diem.  Carter runs right behind that big block for a gain of 3. 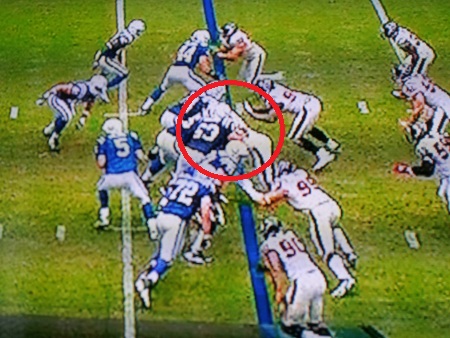 Mitchell #6.  Mitchell is doubled again, this time by Saturday and LG Joe Reitz.  Linkenbach seals Watt on the edge and Mario guesses play actions and chases Collins rather than Carter.  Again, even with the double-team, Mitchell stays on his feet and holds the point and, despite the giant hole, Carter gets only 2 yards.

Upon further review, it seems pretty obvious that Mitchell was more effective at NT in the run game than was Cody. Mitchell was better holding the middle, not getting ridden out of plays by a single blocker, and requiring double-teams on middle runs. The Pro Football Focus numbers also bear this out; Mitchell's grade in run defense was +1.4 (highest run D score on the team Sunday), while Cody scored an abysmal -1.6.

As someone (Nash?) pointed out, the base 3-4, whether with Mitchell or Cody, was not on the field a whole lot Sunday, as Indy imploded almost immediately and had to pass to try to catch up.  This limited number of snaps makes it tempting to suggest that (a) NT is not all that terribly important on this defense or (b) that the sample size here is too small to draw conclusions from.  I don't buy either argument.

First, as to importance of the NT, it's only because Kerry CoLOLins fumbled the ball repeatedly early on that the Texans were able to quickly build a lead.  Banking on recovering fumbles on back-to-back snaps is not the best way to build one's defense for continued success.  Additionally, the Colts just do not have much of a running game; against a team with a strong interior line and a running game that continued to come at the Texans, Cody's play would be (and, sadly, will be) a glaring deficiency whenever he's on the field.

Secondly, re: sample size, the problem with that argument is that Cody's poor play was totally in keeping with what we saw through most of the preseason, to say nothing of the fact that he's been pretty terrible throughout his career.  Maybe he's not -1.6 bad --- though he very well could be in a 3-4 --- but he's not good by any stretch of the imagination.

Conversely, it's pretty likely that Earl Mitchell is not +1.4 good in run defense in a 3-4.  At the same time, the details of his play, going against the same offensive linemen as Cody was last Sunday, suggest that he's literally better than Cody in every facet of the position.  Where Cody was getting blown off the ball by Saturday or Diem and was a non-factor on almost every snap, Mitchell was noticeably quick off the ball (to the point that he guessed wrong and got a stupid encroachment penalty on the play before Reggie Wayne went Fred Astaire in the back of the endzone) and was shooting his gap, either clogging running lanes or requiring an extra blocker.  Not counting the designed off-tackle/outside runs, the Colts averaged 5.6/carry running at Cody; they averaged under 2 yards/carry running up the middle when Mitchell was in the game.  (Here might be the one place that the sample-size caveat applies.)

I'm not trying to pretend that Earl Mitchell is the next Ted Washington in a Wade Phillips defense (or even the next Jay Ratliff).  He has flaws to be sure.  But when he's rotating in with another player, alternating possessions for the most part, and he's so obviously outperforming the other NT, I'm also not willing to pretend like Mitchell and Cody are fungible or that Cody is not absolutely terrible in this new defense.

Yeah, the Texans won, and they won handily against Kerry Collins & The Old Fashioneds.  That's awesome.  I'm legitimately happy about it.  But I also think we've seen the first signs of something that could be a massive problem as we go forward.  Maybe not against Miami, mind you, where Reggie Bush had one 13-yard gain up the middle and otherwise managed less than 3 yards/carry between the tackles, but soon.  I, for one, shudder at the thought of the first game where the Texans fall behind early and the other team wants to run the ball.  Or, perhaps more accurately, I shudder at whatever percentage of those runs come with Cody on the field.

To end with another quote from Lombardi, "Some people try to find things in this game that don't exist but football is only two things --- blocking and tackling."  Indeed.  Someone should inform Shaun Cody.