Early on in the courtship phase of our ultimately doomed relationship, my ex-wife and I went to see the movie City of Angels.  Why did we do this?  I'm not entirely certain, but I seem to recall it having something to do with her liking that inane Goo Goo Dolls song from the soundtrack.1

Anyway, we are at the movie theater and I am bored out of my skull. This is long before smart phones or Angry Birds, however, so I'm just forced to watch the "drama" unfold.  Near the end, however, when Meg Ryan is riding her bike back from the market, basking in the morning sunshine and the afterglow of illicit angel banging, I lean over and whisper to my ex, "If I were writing this movie, she'd get hit by a truck right about now."

AND THEN SHE WAS.2 At this point, the myriad women in the audience burst into tears.  I, on the other hand tried to stifle laughter ... which I ultimately failed to do.  I laughed because I had inadvertently predicted the outcome, sure, but also because such a jarring surprise so late in the film seemed wholly out of place with what the saccharine movie had led everyone to expect.  I laughed so loudly that I started to get murderous, teary-eyed glares from pretty much everyone, including my ex, which only made me laugh harder.3

I was reminded of all of this Sunday during the fourth quarter.  I'd seen that movie before: the Texans played a great first half, then fell apart late and snatched defeat from the jaws of victory.  It was like the Scream franchise; they kept turning out the same movie with different characters.  Except (obviously) they didn't.  Rather, immediately after the Dolphins kicked a field goal to pull within three, the Texans coolly went 63 yards in 5 plays to score a touchdown.  Then Brian Cushing treated Chad Henne like that logging truck treated Meg Ryan's grill, the Texans burned nearly five minutes on their next drive, and the defense stepped up again to dominate the Dolphins on their final possession.  I just love hilariously awesome surprise endings like that.  To paraphrase a line from another song on the City of Angels soundtrack, I got a good, good feeling that the old Texans don't live here no more.

Days elapsed since the Texans last held consecutive opponents to a combined 20 or fewer points.  The last time this happened was the "big time players play big time in big time games on big time TV" 34-7 win over Seattle on December 13, 2009, and the "holy crap, we almost lost to Keith Null?!?" 16-13 win at St. Louis on December 20, 2009.

Top 10 Songs Named After A Woman.

Amount of time, total, that your Houston Texans have trailed their opponents in 2011.  No other team in the league can make the same claim.

Houston's winning percentage (7-13) under Gary Kubiak against teams that run primarily a 3-4 as their base defense.  Even that number is somewhat deceiving, as it includes the season-ending win against New England in 2009.  Of the six "real" wins on the list, Miami accounts for three of them, Cleveland for two, and the 49ers for one.  The win over the 49ers in 2009 was the last victory over a 3-4 squad prior to Sunday.

"Immigrants! That's how they do, you know?! Just drive around, listening to raps and shooting all the jobs!"

[A friend volunteered to ghost write an entry for the Hangover.  This is that entry.]

Live albums are a tricky proposition, in large part because a concert's enjoyment comes from the energy of the crowd, the pleasure of seeing the band in person, and copious amounts of drugs and/or alcohol. And while the latter is easy to address (like right now!), the former is hard to replicate in album form. So when a live album hits, it's usually something special: Daft Punk's "Alive" and both Clapton and Nirvana's "Unplugged" jump to mind. But the creme de la creme is a 1971 recording at the storied Filmore East venue in New York City by the Allman Brothers Band.

For starters, "At Filmore East" was the last album recorded by the band before the death of obscenely talented lead guitarist Duane Allman, and his crisp slide guitar and compelling guitar solos permeate the entire album. (Sidenote: Duane's work can be heard in the above mentioned "Layla" because he was what the French call "le incredible.") Beyond that it contains covers (Blind Willie McTell's "Statesboro Blues"), yet-to-be-released work ("Trouble No More"), and epic renditions of classics ("Whipping Post") delivered by a band at the peak of their creative abilities. There's a reason Rolling Stone put it in the top 50 of the 500 Greatest Albums of All Time.

"At Filmore East" is a masterclass in jam sessions, guitar (and bass) work, and everything that makes southern rock so good, but three tracks in particular bear mentioning. The concluding track "Drunken Hearted Boy" wraps up the album on an effervescent, fun note highlighted by the probably-not-sober Elvin Bishop on vocals. Tucked on the second disc is a twenty-three minute version of "Whipping Post," a track that undulates between savage anger and melancholic despondency. Far be it from me to hope you get dumped, but should you find yourself with a broken heart - there's catharsis to be found in Greg Allman's wailing chorus.

But the crown jewel of the entire album is the thirteen-minute version of "In Memory of Elizabeth Reed" (shout-out to Dickey Betts). It showcases the talent that made Duane Allman truly great, highlighted by his solo at the 7:50 mark. Greg Allman gets some time with an organ solo, and the entire piece is held together by Berry Oakley's relentless bass work. It is a vintage performance from start to finish.

"At Filmore East" is a classic and, if you fancy yourself any sort of a classic rock fan, it belongs on your iPod.

Andre Johnson is on pace for 112 catches, 1,504 yards, and 16 TDs.  And, now that I look at it, those totals don't even seem remotely ridiculous.  Man, I love me some Andre Johnson.

If The Season Ended Today...

that would be odd.

Number of completions and attempts, respectively that Matt Schaub needs to surpass David Carr as the team's all-time leader in both categories.

Cumulative total yards Reggie Bush has run for in two career games against the Texans.  He has rushed for 2.48 yards per carry against Houston, and has added 6.5 catches and 36.5 receiving yards per game.  He has not scored a TD.

Tweet From Monday Morning That Should Make You Love J.J. Watt Even More.

@JJWatt: Headed in to the stadium to watch the film, workout and getter better. There is always room for improvement.

Have You Ever Wondered What Van Gogh's "Starry Night" Would Look Like Were It Made Of Bacon? 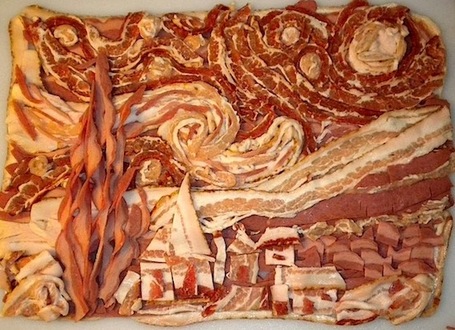 Difference in yards and time of possession between what the Patriots allowed the Dolphins (488; 31:33) and what the Texans allowed them (306; 25:54).  Chad Henne's 170 passing yards were the lowest total of his career in games in which he attempted at least 25 passes.  His 40% completion percentage was the third-lowest of his career and the lowest in games where he attempted at least 20 passes.

Who are the only teams to have never beaten the Houston Texans?  Also mammals.

Who are the only teams that the Texans have never defeated?  Also teams that employ at least one player that I absolutely loathe (Philip Rivers, Jason Babin, Tom Zbikowski, Jared Allen).

The Company You Keep.

According to NFL.com (warning: auto-play video at that link), Ben Tate is only the 11th player since 1950 to rush for over 100 yards in each of his first two NFL games.  Other notables on the list include Marshall Faulk and Earl Campbell.

Total number of NFL games played since Arian Foster rushed for 231 against the Colts in 2010.  Not one of those games has featured a 200-yard rusher.

That snazzy little table there is pretty self-explanatory.  (Data source.)  Given the preference of some people around these parts for light piss water beer over the regular stuff, these numbers are pretty interesting.  For one thing, 100 ml is about 3.38 fluid ounces, meaning that your 12 oz. bottle of Bud Light has only 25 fewer calories than a bottle of Budweiser.  Still, I suppose 25 calories per beer would add up over time.

Hey, if you want to drink that stuff, go ahead.  Knock yourself out.  But if you are only drinking it because you don't want the extra calories?  Yeah, not so much.

The "Marijuana Pepsi Sawyer" Inexplicable Decision Of The Week

Much like the decision to name your daughter "Marijuana Pepsi," the Dolphins' decision to punt on 4th-and-1 (less than 1, actually) when they were down by two scores with 8:14 to play was pretty baffling.  For one thing, RB Daniel Thomas was averaging 5.9 yards/carry on the day, and he was not stopped for no gain or a loss even once.  For another, if the Dolphins had come out with 2 WR, 1 TE, and 1 RB in that tackle-eligible set they ran a bunch of times, it's highly likely that Shaun Cody would have been on the field.  (He was on the field for each of the three offensive plays in that series, and he and Earl Mitchell had been alternating series for the most part.)  The one-yard was almost a gimme at that point, really.

TXT MSGs Of The Week

Frank Bush and David Gibbs may be gone, but their "coaching" lives on in Jason Allen.

Lee, in response to my suggestion that Andre Johnson was God's favorite son:

Possible. I mean, one has been asked to miss the playoffs and play for the Texans. The other got asked to agonizingly die for man's sins.  It's close, but I give the edge to Dre.

1 In retrospect, that she liked Top 40 pablum in general (or the Goo Goo Dolls specifically) should have clued me in on the Hindenburg-ian flight our relationship would ultimately take.

3 Matt Campbell: Winning friends and charming the ladies since 1978!