2DH: Where An Actual Two-Day Hangover Pushed The Post Back An Extra Day

Share All sharing options for: 2DH: Where An Actual Two-Day Hangover Pushed The Post Back An Extra Day 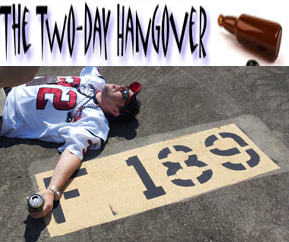 The picture to the left is of commenter and master-tailgater Lone Spot.  What is most notable about the picture is not that he is lying in the parking lot, holding a beer and quite possibly dead; it's that this picture was taken before the game even started.

And that, in a drunken nutshell, is about the best overview I can give of the trip.

[EDIT: MDC, To avoid any potential civil or criminal liability, we had to make some changes to your previous paragraph.  We apologize for any inconvenience the redactions may cause. Sincerely, The BRB Legal Department

P.S. That story was disturbing. --Legal]

By Far The Most Important Observation From Last Sunday.

As I sat in the Superdome Sunday afternoon, watching Drew Brees taking a knee in the victory formation, I realized something: as Texans fans, you should be viscerally angry at what transpired in New Orleans. You should call Reliant, speak to upper management, and demand that they fire everyone responsible. You are getting an inferior product, and you absolutely should not stand for it.

I'm speaking, of course, about the gameday experience that the Saints provide their fans.

The gameday atmosphere in New Orleans is, to put it mildly, absolutely friggin' amazing. It begins when you pull into the parking decks; because the Superdome is downtown and real estate is at a premium, the Saints do not have the expansive acres of parking that surround Reliant. Rather, they have decks similar (if less opulent, I guess) to what you see around the Galleria Mall in Houston. Nevertheless, people pull into their respective slots in the deck, bust out the grills and other pregame accoutrements, and literally tailgate right there in the garage.  (They also fill every bar and restaurant, not to mention every private parking lot, for about a two-mile radius.)  What's more, they are an insanely friendly bunch, offering food and drink to visiting fans as if they were trying to convince you that you are taking part in the greatest football-related party in North America.

Once inside the dome, the usual trash-talk was replaced with good-natured ribbing.  Not once did I hear "the Texans have never made the playoffs" or the other trite, uninspired smack you would expect from pretty much any other NFL fanbase.  Even as the game and the total number of imbibed $14 screwdrivers progressed, and I began talking more and more shit to anyone who would listen, they remained unflappably cool.  Hell, they even acknowledged Andre Johnson's greatness and a few later admitted that it would've been a different game had Arian Foster been healthy.

The pièce de résistance, however, came when the Saints scored their first TD.  Immediately, a little ragtime ditty began to play.  This seemed normal and expected.  After a few seconds, however, the ragtime segued into a melody played by a single trombone ... which then became a slightly changed version of this:

As the Ying-Yang Twins implored people to "stand up and get crunk," the Saints fans did just that. It seemed as if every single one of them was, in fact, standing and behaving in a manner that approximated "crunk." Then, when one of the Twins1 growled, "Here we come ... to get you," the Saints fans all chanted along.  I have never seen or heard anything like it at an NFL game.  I'm not just talking about Reliant, either; I've been to games at Arrowhead, the taxpayer dome in St. Louis, and LP Field, and nothing even comes close to the in-game atmosphere of the Superdome.

The depressing part, at least for Texans fans, is that this could never happen at Reliant, at least not under current ownership.  To loosely quote ~Jay during our drunken ranting about the awesomeness of that song: "The Saints market their team to football fans; Uncle Bob markets the Texans to the old, rich, white guys in the luxury boxes.  And a song like that would scare the shit out of those old, rich, white guys."

A Much Less Important Observation From Sunday That I Feel I Still Need To Mention.

"Who Dat" should have a damned question mark. It's a shortened version of "Who dat say dey gonna beat dem Saints?" Screaming it and writing it as "Who Dat!," with an exclamation point, makes no sense. Even if they are asking it rhetorically, they are still ASKING it.

I'm Not Saying That Rural Mississippi and Louisiana Are Terrible Places To Drive Through, But...

At one point, my GPS tried to talk me into swerving at oncoming traffic just to liven things up.  If you've never heard the plaintive cries of a digital device that has lost the will to live, consider yourself lucky.  It's truly heartbreaking.

Historical Perspective on the Running Back Position in Houston, 2002 to Present.

Ben Tate currently has 301 rushing yards.  This is good for the sixteenth-best SEASON total among all Texans running backs.  (For a little reference, this same 301-yard total would rank as the Tennessee Titans' 29th-best season since moving to Methopotamia, it would be the Jacksonville Jaguars' 32nd-best season, and it would be the Pittsburgh Steelers' 148th-best season.)

Even more telling (in an "oh, god, I didn't remember them being that bad" sort of way), Tate needs a mere 175 yards over his next thirteen games (13.5 yards/game) to crack the single-season top 10 (Wali Lundy, 476 yards in 2006, currently sits in the #10 spot).  He needs but 473 yards over that period (36.4 yards/game) to pass Ron Dayne for the sixth-best single rushing season in a Texans uniform.

Historical Perspective on the Cornerback Position in Houston, 2002 to Present.

With his two interceptions, Johnathan Joseph is tied for the eighteenth-best season total in team history.  He is five away from the single-season team record (Marcus Coleman -- 7 in 2003).  With two more, Joseph will tie Jacques Reeves (2008), Brian Cushing (2009), and Bernard Pollard (2009) for the fourth-highest single season total in team history.

I dinna cry when me own father was hung for stealing a pig, but I'll cry now.

I'm Not Saying That Rural Mississippi and Louisiana Are Desolate, Empty Places, But ...

If you told me that Gen. William T. Sherman began his infamous "March to the Sea" upon leaving Arkansas Post in 1863, I'd believe you and assume that the states had simply not bothered to rebuild.

Number of douchebag Saints fans, total, that I encountered while in the Big Easy.  While standing in line to get through security and into the Superdome, the following exchange with said douchebag occurred:

Douchebag: [running toward me and a handful of other Texans fans] WOOO! THE ONLY THING FROM TEXANS ARE STEERS AND QUEERS, AND I DON'T SEE ANY HORNS ON YOU BOYS!

Me: Original.  You write that?

Me (loudly): And your starting quarterback ... [/notices Douchebag's choice of jersey] ... WHOSE JERSEY YOU ARE WEARING RIGHT NOW, YOU F@#KING MORON!

Saints fan behind me (to Douchebag): Hey, shut the f@#k up and get out of here! You're making the rest of the Saints fans look stupid.

Yards per game averaged by Ben Tate in 2011.  For comparison, Arian Foster averaged 101 yards/game last year.  Though, to be fair to Foster, he was averaging 135.3 at this same point last season.  He also had three TDs to Tate's single score, and was averaging 5.9/carry to Tate's current 4.6.  Still, if Tate is your Plan B, you're doing alright.

My Best Attempt At Describing What Bourbon St. Smells Like.

The homeless, alcoholic love-child of a brothel and the Gulf of Mexico.

Or, possibly, a chain-smoking stripper who also works part-time shucking oysters in a Pascagoula dive bar.

(Thing is, the stink sort of adds to the whole Bourbon St. experience.  I can't explain it.)

An Attempt At Perspective.

Had I told you beforehand that the Texans were going to lose to New Orleans 40-33 on some late heroics by Drew Brees, my suspicion is that everyone would have been more or less fine with that. We knew this was going to be a tough game, and, for a team who last year wouldn't have stood a chance at winning in New Orleans, a one-TD loss on the road would hardly have sounded heartbreaking.

I understand the whole, "The Texans Only Played One Half --- Stupid Same Ol' Texans!" mindset, but that's simply not true. The Texans led at the end of the first, second, and third quarters, and they did not trail until the 7:10 mark of the fourth quarter. Even then, the Texans came back and re-took the lead with 2:57 to play. Yes, they lost, but it was not because they only showed up for half of the game (a la 2010).

Don't get me wrong: there are still things that must be fixed if this team is going to be an actual playoff contender. The points left on the field by taking short FGs remain a problem. The redzone playcalling remains roughly as creative as Jeff Dunham's standup. The corners whose names do not end with "oseph" were getting torched like Columbia, SC, in 1865.2 These are all problems.  But, again, a one-TD loss, on the road, to one of the very best offenses in football.  The sky ain't falling, people.

That was the last time someone other than Andre Johnson had over 120 receiving yards in a game. (Kevin Walter -- 144.) I've mentioned how enamored I am with James Casey, right? Because I am. Very.

You're so hot for him, I could reheat this chili in your chooch. So how about it? Chooch chili?

And Now, A Photo Of Someone I Saw In Lake Village, Arkansas, Who I Momentarily Thought Might Actually Be Daunte Culpepper. 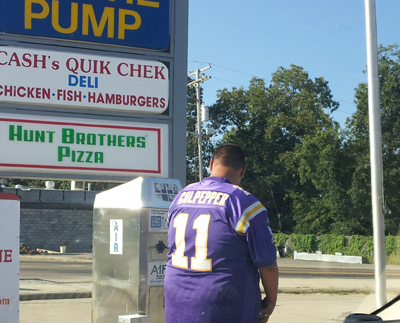 Andre Johnson is on pace for 112 catches, 1,680 yards, and 11 TDs.  Again, it's pretty impressive when the projected line you have based on three games looks like that and seems absolutely attainable.

The "Marijuana Pepsi Sawyer" Inexplicable Decision Of The Week.

Much like the decision to name your daughter "Marijuana Pepsi," I am baffled by Matt Schaub's failure to audible when an opportunity presents itself.  Case in point: at least twice on Sunday, Andre Johnson was lined up in the slot with a safety playing him in tight man coverage.  On one of the plays, the ONLY deep help should Andre get past the safety was a linebacker near the middle of the field.  Nevertheless, on both of these plays, the Texans ran the ball rather than quickly change to a play that would exploit this insanely favorable matchup.  I'm not sure if it's because Schaub doesn't like to change plays or because Kubiak doesn't really let him, but, whatever the reason, both of these baffled me.

In Lieu Of TXT MSGS Of The Week, Cartoons Of The Two Most Interesting Conversations I Had This Past Weekend.

~Jay, in response to my wondering aloud whether the lesbian with the pink hair had dyed the carpet to match the drapes:

1 Ying? Yang? I can never keep them straight.

2 A second reference to Gen. Sherman? You bet your Manassas!