Pickin' Winners and Eatin' Wings (Week Ten), Or: Picks In The Fast Lane

It's a new week, a new opponent for the Texans, a new wing to sing the praises of, and a new opportunity to work Scott Farkus and Nazis into a football post. Let's make some picks!

Share All sharing options for: Pickin' Winners and Eatin' Wings (Week Ten), Or: Picks In The Fast Lane

So here we are again, it's been too long, friend. Too long since the Texans have played. Yes, yes, I know they just played on Sunday, but it's still been too long. But what a game to look forward to, a clash against a fellow 7-1 team on Sunday Night.

Well, let's go to our sauce of the week for why.

This week's sauce is the hottest sauce that Buffalo Wild Wings has created and possibly ever will create, short of dumping pure capsaicin on their wings. It is useful as a contact anesthetic or paint stripper, can cure insomnia and is a very useful self-defense against muggers or wandering bears. It should only be eaten outdoors, with a doctor's certificate, and well away from populated areas. It has a half life of 23 days, glows in the dark, and can be used as a source of X-rays; at least according to this list of unrealistic-sounding facts. 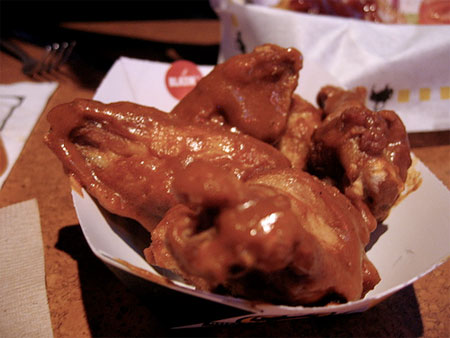 Forged in the depth of hell, or Houston's mid-August heat
You're taking your life in your hands, if this you should eat
Still, like moths to a flame you will be drawn
And should you finish, a legend you'll spawn

Last week we had a minor error with our Thursday night pick. I had intended to pick the Chargers (as the buildup had suggested) but took the Chiefs instead. No, I'm not stupid, nor did I think that would be an upset. I wanted the Chargers and thought I had put the Chargers, but didn't. I will accept this error and claim the erroneous pick as my own.

Indianapolis Colts at Jacksonville Jaguars - Tonight we get to watch the hilarious stylings of Blaine Gabbert and the Jacksonville Jaguars. What's that? You're telling me he's not trying to be funny? Don't be ridiculous. The Colts take another step toward an improbable wild card berth. Pick: Colts

Detroit Lions at Minnesota Vikings - Christian Ponder is, to put it nicely, streaky. Sometimes he'll put up 300 yard games with multiple scores, other times he'll look about as lost and confused as a puppy in a room full of fire hydrants. Whether Adrian Peterson can cut through the Lions run defense will determine who wins this game. Pick: Lions

Atlanta Falcons at New Orleans Saints - I'd say they should break up the Saints, but it looks like the NFL is doing its best to actually accomplish that. They've won three of their last four games, albeit against San Diego, Tampa Bay and Philadelphia. But that being said, I'll be floored if the Falcons don't hang triple digits on that awful, Bushian defense. Pick: Falcons

New York Giants at Cincinnati Bengals - Dammit, Giants, I expect you to do a simple thing like beat the Stealers and you can't even do that? I am severely disappointed in you. Now go to your rooms! Or at least that's what I would say if I were in any position to do so...and if they weren't significantly larger than me. Against the Bengals, I don't expect them to have nearly as much trouble. Pick: Giants

Oakland Raiders at Baltimore Ravens - Even with their defense as busted up as it is, and I still enjoy thinking about that 30 point whuppin' the Texans dropped on them, I still think the Ravens have little to fear against the Raiders. Unless, that is, Al Davis returns to rain hellfire for his own amusement. Pick: Ravens

Buffalo Bills at New England Patriots - Judgment Day has passed, and the Bills came off a lot worse for it than our beloved Texans. Now they get to face off against the class of the division, the Patriots. Maybe, just maybe, if Mario put the kind of attention on the Pats that he did against the Texans, they might have a chance. I fully expect Mario's pilot light to be fully extinguished and the Patriots will roll. Pick: Patriots

Tennessee BESFs at Miami Dolphins - Also in contention for one of the two wild card spots, through some kind of technical error, I'm sure, are the Miami Dolphins. With Jake Locker likely to take the field, I see no reason why the Dolphins should have any problem with the fightin' Sisyphuses. Pick: Dolphins

San Diego Chargers at Tampa Bay Buccaneers - I have to admit, I'm torn about this one. On one hand, the Chargers are not a very good team. On the other hand, I think the Bucs are nothing to write home about either. I think the real winner in this game is whoever watches this game sitting at a bar. Pick: Buccaneers

Denver Broncos at Carolina Panthers - After a bit of a shaky start, the Manningful Broncos have won four of their last five. I fully expect that to increase to five of the last six, partly because the Broncos are that much better than the Panthers, but mostly because I want to see Cam Newton cry like he just got hit by a Scott Farkus snowball. Pick: Broncos

New York Jets at Seattle Seahawks - While watching Mark Sanchez struggle against Houston was fun, I think it might be even funnier when he has to face another one of the best defenses in the NFL. Also, since it's a home game for the Seahawks, Russell Wilson (who is getting better and better every week) should put up another fine performance. Pick: Seahawks

St. Louis Rams at San Francisco 49ers - It almost seems unfair, you know. The Rams got a bye week to rest and recuperate for their next game. And that next game happens to be against a vastly superior Niners team who ALSO got a chance to rest last week. The Rams will lose, and it won't be pretty either. Pick: Niners

Arlington Cowfarts at Philadelphia Eagles - There is only one real reason to watch this game: at the end of it, one of these teams' playoff hopes will come to a fiery end. I'd really like it to be the Cowfarts, but the Eagles are playing so terribly that even the Farts should mouse-squeak a win here. I really hope I'm wrong about that. Pick: Eagles