In this week's picks, we mock ESPN for selling its soul for ratings, make a semi-obscure Saturday Night Live reference, and brag about eating wings at Buffalo Wild Wings. Mmmmmmm, wings, drooooooooooooooool...

I could open this week's picks post by reveling in the glory of an 8-1 record, of being tied for the best record in football. I could mention that even if we finish by winning every other game (which I really hope does not happen), we would finish the season with 15 wins.

I could rant and rave about the lack of exposure the Texans are receiving despite their monstrous season, about how ESPN is so dedicated to all Tebow all the time that they forget to even write anything about the Texans on their website. But screw ESPN, this is a happy occasion!

No, instead, I would like to bring up something that I found particularly interesting on Football Outsiders. On the main page they show a list of each team's playoff odds. You can see how they calculate it here, but in essence they run a computer simulation of how the season will play out 50,000 times and determine how many time a certain team goes to the playoffs.

As of this week, your Houston Texans are officially listed as having a 100% likelihood of making the playoffs. These odds, of course, are subject to change depending on how the Texans do on a week-to-week basis, but at the moment, not only are the Texans locks to make the playoffs (according to the FO computer) but they currently have a 65.5% chance of snagging the first seed in the AFC.

Things like that make me smile. You know what else makes me smile? Fresh wings from Buffalo Wild Wings. So with that segue made, let's get on with our ode to this week's sauce.

This week, we focus on a sauce that I had at Buffalo Wild Wings Sunday night as the Texans smacked around the Chicago Bears. It's hot, it's zingy (obviously), it's enough to make me feel like I'm on the Mekong Delta: It's Asian Zing, and it's gooooooood. 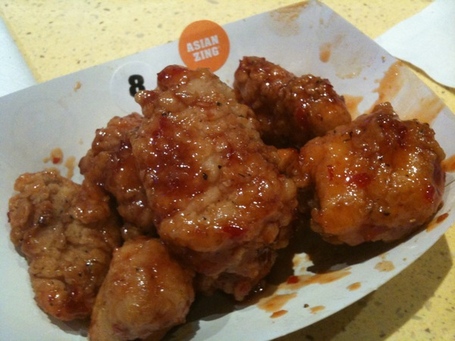 They say that the wing is the thing,
And for the Bears, losing Cutler might sting.
But watching this and eating wings
Was enough to make my heart nearly sing.

Miami Dolphins at Buffalo Bills - Before the season began, I thought one of these teams would be competing for a playoff spot. Had you told me it would have been the Dolphins, you'd probably owe me a bottle of beer after I snotted it out my nose. That being said, LOLFitzpatrick. Pick: Dolphins

Cleveland Browns at Arlington Cowfarts - Dammit Cowfarts, can you stop playing all these cupcakes so I can finally start picking against you again? At this rate I'm going to need to shower with battery acid to atone for this. Even though I'm not picking them, I hope Cleveland embarrasses the Cowboys. Pick: Cowfarts

Tampa Bay Buccaneers at Carolina Panthers - Hello, and welcome to "Coffee Talk with Linda Richman UprootedTexan." Today's discussion: Cam Newton, ludicrously overrated or having the mother of all sophomore slumps? Discuss, as I'm all verklempt at having to pick either of these teams here. Pick: Buccaneers

Arizona Cardinals at Atlanta Falcons - As a means of pointing out the pointlessness of power rankings, consider this: Earlier this season, one of these meaningless power rankings filler posts that allegedly respectable media outlets put out had the Cardinals as the best team in the NFL. Now, they're stuck somewhere in the morass of mediocrity well out of sight of the playoffs; it's the natural order of things. Pick: Falcons

Cincinnati Bengals at Kansas City Chiefs - While the Chiefs lost to the Steelers in overtime last week, they gave the world something far, far more precious than a Steelers loss: they knocked out Ben Roethlisweasel. And on behalf of humanity, I'd like to take a moment to thank Justin Houston and Tamba Hali for their contributions. As far as the current game is concerned, I think the Chiefs go back to trying to set the NFL record for longest time spent without holding a lead in a game. Pick: Bengals

Green Bay Packers at Detroit Lions - I can't believe I thought the Lions would fairly easily make the playoffs this year. As it is they've got a lot of work ahead of them; getting the edge on Tampa Bay and Seattle is going to be difficult. And this game won't help matters for them. Pick: Packers

Jacksonville Jaguars at Houston Texans (a.k.a. The Only Game That Matters) - If the Texans could drub the Glitter-'Stashed Kitties in Jacksonville, can you imagine the kind of fresh hell they could unleash on them at home? Maybe we can even get Blaine Gabbert to ball up like a little mulleted hedgehog! I want to see that. Make it happen, Bulls on Parade! As an aside, what on Earth did we do wrong to end up with Steve Tasker calling the game this week? Pick: Texans (obviously)

Philadelphia Eagles at Washington Redskins - These two teams are just playing for pride now. I expect the Redskins to win. And considering that horrendous offensive line the Eagles have, I hope Nick Foles doesn't end up fused with the ground. Pick: Redskins

New Orleans Saints at Oakland Raiders - I can't say I can bring myself to care much about this game, which probably has something to do with the fact that the Raiders are playing. All I know is it's going to be ugly. The Saints' defense is downright depressing to watch and the Raiders are missing the freak show factor now that Al Davis died. Either way, I think New Orleans extends its streak. Pick: Saints

San Diego Chargers at Denver Broncos - Psst, Broncos. I didn't get to see y'all make the 20 point comeback on Monday Night Football earlier this season. Could y'all do that again so I could see it this time? I'd rather appreciate it, and considering how the wheels are falling off in San Diego, I expect to see something to that effect. Pick: Broncos

Indianapolis Colts at New England Patriots - You're going to hear enough blather about this game from the media, if they can be bothered to tear themselves away from Tim Tebow, so here's a quick take and I'll let you get on with the next game: The Pats simply have too many weapons for the banged-up Colts defense to cope with. The Pats win and I die a little more inside because I have to pick them again. Pick: Patriots

Baltimore Ravens at Pittsburgh Stealers - Now that Ben Roethlisweasel is out for an indefinite period of time, the referees are going to have to work extra hard to get their beloved Steelers another win, especially against a Ravens team that really is unfond of them. Can't say I blame them, really. And here's hoping that Cris Collinsworth chokes on his own vomit at having to call this game between two teams I expect he REALLY hates. Pick: Ravens

Chicago Bears at San Francisco 49ers - Watching the Niners end their game with a tie entertained the hell out of me. Not just because it helps my NFC West team, not just because the refs were hosing the Rams left, right, and center, but because Dashon Goldson is now part of the same pantheon as Donovan McNabb of players that didn't realize games could end in a tie. In the Backup Bowl, though, I like the Niners better with Colin Kaepernick than I do the Bears with MDC's unimpressive distant cousin. Pick: Niners

So there are this week's picks. Got picks you disagree with? Want to share your own picks? Want to bask in the glory of an 8-1 record? Do so in the comments!