It has come to my attention that this series of posts has caused no small amount of delicious anguish among some of our readers. One of whom, I understand, is even a member of this very writing staff (coughBrettcough). Far be it for me to cause another person misery by discussing tasty delicious buffalo wings which can be ordered in a variety of sauces, because that's just not how I roll.

After all, it'd just be cruel to drive someone to a level of tender, savory hot wing insanity only to leave them without a method of satisfying that craving.

Then again, maybe I am that cruel. So with that in mind, I'd like to introduce a new segment which should put Brett in a sufficient mindset to beat up old ladies in back alleys for whatever money they have on them just to get his hands on the tangy, winged goodness that is Buffalo Wild Wings: 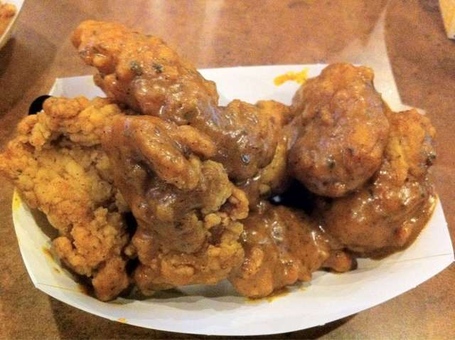 Hot chilies, Thai curry, and a hint of lime
What's not to love, the flavor is sublime
Such balanced flavor to these wings
I can't get enough of these things!

I guess we should get on with the picks, now, huh?

Seattle Seahawks at San Francisco 49ers - Why did the Giants have to dominate the Niners last week? Now they'll be pissed off and looking to use Russell Wilson as a planter...or a garden gnome at least. Either way, it'll be a close game and...aw screw it, I'm going with the local team on this one. Pick: Seahawks

Tennessee BESFs at Buffalo Bills - Ahh, a matchup of Houston's two most hated teams (assuming you watched the Oilers at all). So who does one pull for: the team that was responsible for the most embarrassing loss in NFL history, or the team that pulled up stakes and went to...it's Chattanooga, right? Eh, enough hate, time to pick against the Traitors already. Pick: Bills

Cleveland Browns at Indianapolis Colts - So which Colts team do we see this week? The one that managed to beat the Packers? Or do we see the team that laid a monster egg against Mark Sanchez, Mark-Freakin'-Sanchez, and the Jets? Well, they are playing the Browns, which makes this pick a little easier. Pick: Colts

Baltimore Ravens at Houston Texans (A.K.A. The Only Game That Matters) - I should feel more confident about this game since word broke that Ray Lewis and Lardarius Webb are out for the year, Haloti Ngata and Ed Reed are banged up, and Terrell Suggs is still recovering from an Achilles tear. I WANT to be more confident, but I keep thinking about how the Packers were missing several key players and...never mind, let's not go there. All that said, I do think the good guys have a damn good chance at winning this one. Pick: Texans

Green Bay Packers at St. Louis Rams - Sorry Packers, I'm still pissed at you for last week, plus I need an upset game and this seems like as good a choice as any. Pick: Rams

New Orleans Saints at Tampa Bay Buccaneers - Two teams fresh from their off week. Maybe New Orleans is finally putting it together? Although that defense is pretty dreadful and anything can happen in the NFC South, I think New Orleans notches their second win on the year. Pick: Saints

Arlington Cowfarts at Carolina Panthers - I hope that Jason Garrett Jerrah's sockpuppet can improve his clock management skills this week. Okay, I don't really hope that, in fact, not at all, for that Cowgirls loss was awesome. As for the game, well, I just don't like picking the Cowfarts so we'll go with my fourth favorite team: whoever's playing Dallas. Pick: Panthers

Arizona Cardinals at Minnesota Vikings - The Cardinals seem intent on playing this merry-go-round system with their quarterbacks. First Skelton wins the job and gets injured. Then Kolb starts playing the best NFL football a University of Houston quarterback has ever played and then gets a horrific-sounding rib injury. Now we're back to Skelton. But at the same time, the Vikings have been a lot better than a lot of people expected this season. But with a second-year quarterback against the Cardinals defense, I think that makes this pick a little easier. Pick: Cardinals

Washington Redskins at New York Giants - That last game against the 49ers kind of wipes the terrible, awful, no-good, very bad game the Giants had against the Cowfarts on opening night out of the mind, doesn't it? And going against a better Redskins team than they've faced in the past, I expect the Giants to keep rolling. Pick: Giants

New York Jets at New England Patriots - As you may be aware, 9/10 of this country's population lies just east of the Hudson River (ed. note: possibly an exaggeration), which is why the media's attention will be squarely on this one game between God's nephew and his Patriots and Tim Tebow's New York Jets. No, there will be no Tebow jokes here. The only thing that would make this better is if at halftime Bill Belichick and Rex Ryan wrestled in a mud pit to determine who gets the ball in the second half. Okay, I lied, and I think I sprained a synapse thinking of that. I'm terribly, terribly sorry. Pick: Patriots

Jacksonville Jaguars at Oakland Raiders - And then you have this game, where you would expect the attendees to be paid to be inside the stadium. I think I'm depressed just thinking about this game, and whoever has to watch this should get a bottle of tequila to dull the pain (unless you're a Raider fan, in which case anything short of paint thinner would have no effect). Pick: Raiders

Pittsburgh Stealers at Cincinnati Bengals - Okay Bengals...this is getting a little tiresome. I expected you to beat the Dolphins and you give up the ghost. I expected you to stomp the Browns and you couldn't even do THAT! Now you're up against the referees' favorite team and you expect me to pick you? I'm taking the Stealers. But then when I do take the Stealers, the Pride of Katy (tm) will go bonkers and win. So I'll take the Bengals, but then you're expecting that and you'll lay another egg. STOP PLAYING GAMES WITH MY MIND!!!! Pick: Bengals

Detroit Lions at Chicago Bears - Have you noticed that Ndamukong Suh hasn't made many headlines recently other than putting his footprint in that one guy's face on Thanksgiving? Just thought I'd ask. The Lions, too, have been kind of regressing some, especially considering how well they played last season. The Bears, on the other hand, I don't know what to make of them anymore. Either way, I still think the Bears are just flat better than the Lions, and that's who I'm taking this week. Pick: Bears

That's this week's picks. Got a problem with these picks? Want to share your own? Would you like to make Brett insanely jealous by talking about hot wings? That's what the comments section is for! Go for it!