Share All sharing options for: Thank You, Texans Rookies

Rivers' exquisitely crafted note of gratitude to Wade Phillips gave us an idea. For the next several days, we'll periodically be posting entries thanking various people who had a hand in making the Texans' 2011 season as enjoyable as it was. The season's over, which blows, but there's a lot to appreciate, and it's a loooooong offseason, so let's do take a minute to say thank you.

Watching the NFL Draft as a Texans fan has always been something of a rite of passage. Until recently, the high point of every season in this team's history has come in April when the commissioner would announce the next, newest Houston Texan. Previous drafts have left fans wanting to kick puppies, drive into oncoming traffic, or drive freshly-kicked puppies into oncoming traffic (Travis Johnson and C.C. Brown say hi).

Last year was not one of those drafts. Last year's draft was responsible for netting the team three rookies, in particular, who played integral roles to the team's success this year. Without these three players, this dream season doesn't happen, so I want to take a moment to thank them individually for battlin' when they were needed most this season. 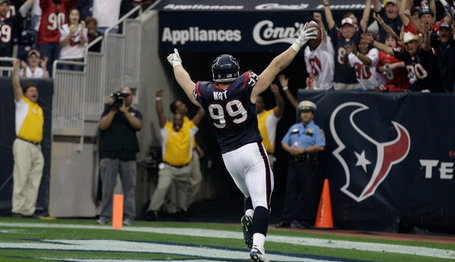 First off, thank you for just generally being a great human being. Even during the offseason, your tireless efforts to help others like the Berry children, starting a foundation even before you entered the draft, and helping kids learn about the effects of playing in extreme heat and how to avoid heatstroke made it incredibly easy to root for your success.

Thank you for playing as fearlessly and effectively at defensive end as a Houston Texan as you did when you devoured the souls of offensive linemen during your time at Wisconsin. You have been absolutely everything you were advertised to be, and beyond. I look forward to seeing you anchor that defensive line for years to come, and I can't wait to see how you develop with a full off-season with the team this year.

Thank you also for the first of what I suspect will be many great playoff moments in Texans history. I will never forget seeing you pluck the ball out of the air and charge into the end zone for your first career touchdown. For me, that play ranks up there with the Seahawks' Beast Quake in terms of how cathartic it was for the fans, how loud the stadium became afterward, and how it completely changed the course of the game afterwards. 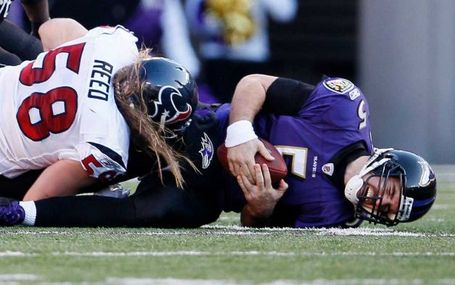 I think I owe you an apology, Brooks. When Mario Williams went down early in the season, I had some misgivings about how you could fill the shoes of such a dominant pass-rusher. Six sacks and 45 tackles later, you showed me that my concerns were as needed as a snow cone in an ice storm. Thank you for playing better than anyone could've possibly expected you to.

Thank you, also, for making our linebacker corps a position of strength going into next season. I can't wait to see how Wade will get you, Mario, Barwin, AND Cushing on the field at the same time. You give the Texans something that I can't recall them having before: quality depth and another dimension to an already vaunted pass rush.

It's going to be a lot of fun to watch you slaughter quarterbacks next year, whether that's in a full or part-time role. 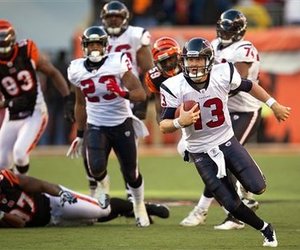 I'll be honest, T.J., when you came onto the field, I thought our season was effectively over. In my mind, Matt Schaub was the one piece of the offensive puzzle we could not afford to lose. Then Leinart went down and I could see the dream season we've waited for so long to experience slipping away. I truly did not know what to expect of you and I steeled myself for the worst.

But during your first full series against Jacksonville, you showed me that you were made of stronger stuff than most rookie quarterbacks. You didn't play like Blaine Gabbert a scared rabbit. You were calm, composed, but most of all, you played like you had been running Gary Kubiak's system for years; which makes sense, really, because you kind of did at North Carolina. And you maintained that calm throughout the remainder of the season

So thank you for your composure under center. Nobody would have blamed you for struggling, especially with the pressure this team was under to make the playoffs this year. Basically, thank you for not being Blaine Gabbert.

Thank you for giving me reason to think that we'll be set at quarterback for a long time. I believe, with additional time, you could eventually become the Aaron Rodgers (homeless or not) to Schaub's Brent Farve [sic].

But most of all, thank you, from the bottom of my heart for leading the single greatest drive in franchise history. There isn't a Texans fan anywhere that won't remember where they were when you, not Schaub, not Leinart, and certainly not the League of Extraordinary Geezer Quarterbacks behind you, led the Texans 80 yards down the field on that December afternoon and connecting with Kevin Walter for the game-and division-winning touchdown.

That drive and that play will live on in Texans lore forever, and none of us will forget that it was engineered by a fifth-round, third-string rookie quarterback.

Thank you all for this tremendous season, and I, like countless other fans, cannot wait to see what you have in store for us next season.