Share All sharing options for: Thank You, Andre Johnson

Rivers' exquisitely crafted note of gratitude to Wade Phillips gave us an idea. For the next several days, we'll periodically be posting entries thanking various people who had a hand in making the Texans' 2011 season as enjoyable as it was. The season's over, which blows, but there's a lot to appreciate, and it's a loooooong offseason, so let's do take a minute to say thank you.

When you think about it, devoid of context, it is a little weird to be thanking a guy who played in 7 games during the regular season and finished only 5 of those. But, then, that's why context is important, isn't it. (Spoiler alert: Yes, it is.) And that's why I wanted to take a few minutes and thank Andre Lamont Johnson, not so much for what he did in 20111, but for what he's done for this franchise and meant to this organization for nine seasons.

Due in large part to my rule that, all things being equal, you should always take the Miami player over a similar player from a lesser football program2, I was thrilled when the Texans took Johnson third overall in 2003. In what we would soon realize was typical Andre fashion, he hauled in 6 catches for 76 yards in his Texans debut, a 21-20 win over the Dolphins in front of his friends and family in Miami.

So, first off I suppose, thank you, Andre, for being a beast from the start and making Texans fans feel much more confident about the franchise's second first-round pick than they did about the team's first.

Secondly, thank you for 706 catches, 9,656 yards, and 52 TDs. There's a reason that you are a five-time Pro Bowler and two-time All Pro with the highest yards/game total in NFL history.

Third, Andre, thank you for being the consummate professional. At no point have we ever had to worry about you getting busted with a hooker, caught with a cache of guns/drugs/undocumented Peruvian dwarfs, or suspended for steroids/marijuana/overtraining. I've never been of the opinion that every player on a team needs to be a perfect saint, but there's something comforting one as the best player in team history.

Fourth, thank you for being a tremendous human being. Whether giving bikes to elementary-school students, going ahead and holding his charity event even after a corporate sponsor pulls out, taking thirty kids on an 80-second shopping spree for Christmas, or doing any of the myriad other charitable things he's done in Houston and Miami, you have never forgotten where you came from. That's admirable on so many levels.

Fifth, Andre, thank you for knowing when being a consummate professional needs to give way to just beating some mouthy punk's bitch ass. Because that was awesome. 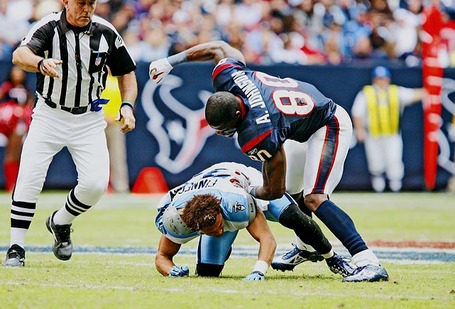 Sixth, thank you for being so committed to a team that had been 51-77 for your career to that point that you were willing to restructure your contract to help that team get under the salary cap.

Seventh, Andre, thank you for some truly transcendent moments, including (but certainly not limited to):

All of these things --- and so many more than I didn't mention --- are why everyone, fans and teammates alike, were so happy for you to make the playoffs in 2011. Even having written this post, it sort of feels like I've failed to really explain what "Andre Johnson, Houston Texan" has meant over the last nine years. At the risk of being a little pretentious, maybe I can best explain it by paraphrasing the late Pier Paolo Pasolini's statement about Brazilian soccer:

Houston football is prose without Andre Johnson, and poetry with him.

And, for that, we thank you.

2 And due in slightly less-large part to the fact that Charles Rogers went to Michigan State and had "lazy headcase" written all over him even in college. (Oh, speaking of Rogers, check out the "College Career" section of his Wiki and tell me that you don't find yourself waiting for a punchline.)