2DH: In Denard We Trust

Share All sharing options for: 2DH: In Denard We Trust

Under normal circumstances, losing a game in the manner that the Texans did on Sunday would have sent me into a rage that resulted in a dog's being kicked. (Probably the little dachshund; she barely counts as a dog, really.) Losing to the Tennessee Titans in that fashion would have taken my reaction up another notch to outright apoplexy (meaning I would have kicked the dachshund at one of my kids).

Yet none of that happened, because Sunday was not "normal circumstances." It did not matter one bit whether the Texans won, lost, or tied that game. Yet, despite that, the backups, especially on defense, played very well and almost beat a Titans team that was fighting for their playoff lives.

You'd think that everyone --- at least everyone who was a Texans fan --- would have had the same outlook about the game. After all, there was zero upside to going to overtime in that situation, so the 2-point conversion attempt was absolutely the right call, even after the false start. There was zero downside in losing the game; the playoff seed could not possibly change, no matter what happened.

Some people, however, saw it differently. 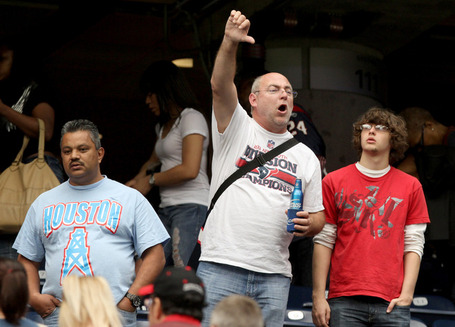 An Open Letter To The Douchebag In The Division Champions Shirt Above.

Seriously, it seems that your fat, balding head is jammed so far up your own ass that you have no idea what is going on around you. I mean, "f*$king idiot" is the only way I can describe someone who would boo --- WHILE WEARING A DIVISION CHAMPIONS T-SHIRT --- at the conclusion of an absolutely meaningless game. No other descriptor really covers such an asinine reaction.

I hope you develop a painful rash that is unresponsive to prescription medicine.

Rushing yards gained by Ben Tate on Sunday against the Tennessee Titans. He gained the yardage on 16 carries, ending the regular season with 942 yards and 4 TDs on 175 carries.

Rushing yards gained by Chris Johnson on Sunday against the Houston Texans. He gained the yardage on 15 carries, ending his season with 1,047 yards and 4 TDs on 262 carries.

The difference between what Chris Johnson was paid this year ($10M signing bonus, $3M salary) and what Arian Foster was paid ($525,000). Even if you ignore the signing bonus, Johnson's 2011 salary is still almost two-and-one-half times greater than what Foster has made during his entire tenure with the Houston Texans.

But, hey, any time you have a chance to lock up the third- or fourth-best RB in the division for $30M in guaranteed money, you've gotta do that, right Tennessee?

"Discrete" and "discreet" are not the same word. The former means individually separate and distinct; for example, "The Texans regular-season schedule comprises sixteen discrete contests." The latter, however, means "Careful and circumspect in one's speech or actions" or "intentionally unobtrusive;" for example, "Gary Kubiak's post-game press conferences are generally composed of discreet statements regarding the team."

Why do I mention this? Because I received an email at work asking for donations for Christmas gifts for the cleaning and maintenance crews, and the email urged people to "be discrete when dropping off donations so we don't spoil the surprise!" When I asked the woman who sent the email if she was asking that we bring our donations in separately, she seemed confused and said that we could pool them if we wanted, but just "be discrete if maintenance or janitorial staff are around." I asked how I would know if such staff were present until after I had already walked into her office. She replied, "that's why I said to please be discrete."

Then I gave up.

Combined number of winning teams (based on final 2011 regular season record) that the New England Patriots and the Detroit Lions beat in 2011.

Number of 2011 playoff teams that the Cincinnati Bengals beat in 2011. They were 0-7 against Baltimore (x2), Pittsburgh Steelers (x2), Houston, San Francisco, and Denver Broncos. (Sure, that was mentioned above, but it warranted its own entry.)

Early in the third quarter, Bryant Johnson (89) was flagged for clipping based on this block on Derrick Morgan (90). 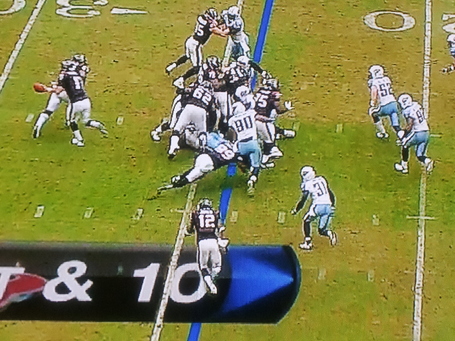 Steve Tasker, in his infinite wisdom, explained that it was "an obvious clip" because Johnson had come from outside and only offensive linemen can block like that. Which is wrong, of course, but you could probably guess that based on the fact that I was paraphrasing Steve Tasker. The rulebook has the following to say:

Clipping is throwing the body across the back of the leg of an eligible receiver or charging or falling into the back of an opponent below the waist after approaching him from behind, provided the opponent is not a runner.

OK, based on that, one might think that this was a clip. Unless, that is, one was an NFL official, who should know the rest of rules as well, including Rule 12, Section 2, Article 9 (emphasis mine):

There shall be no clipping from behind below the waist against a non-runner. This does not apply to offensive blocking in close-line play where it is legal to clip above the knee(s), but it is illegal to clip at or below the knee(s).

Penalty: For clipping: Loss of 15 yards.

(1) Close-line play is that which occurs in an area extending laterally to the position originally occupied by the offensive tackles and longitudinally three yards on either side of each line of scrimmage.

So, we need one other pic that shows where the right tackle was originally lined up pre-snap, so that we can compare it to where this block occurred. 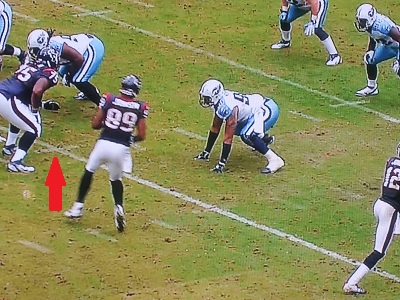 You can see that Derek Newton is lined up over the hashmark at the 25-yard line. Going back to the first pic: 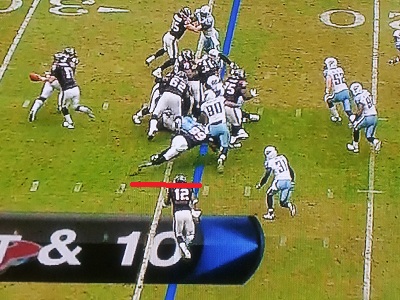 The block occurred will inside "an area extending laterally to the position originally occupied by the offensive tackles and longitudinally three yards on either side of each line of scrimmage." By definition, then, it would not seem to have been clipping.

A person might argue that it was an illegal crackback rather than clipping. To that I say (a) that's not what was called and (b) Johnson was not more than two yards away from Newton at the snap, which is required under the rules before a block can be an illegal crackback. (See NFL Rule 12, Section 2, Article 10.)

Field goals by Neil Rackers in 2011, a single-season team record.

Sacks by the Houston Texans in 2011, a single-season team record.

Interceptions by the Houston Texans in 2011, the highest single-season total under Gary Kubiak and the second-best team total overall behind the 22 picks in 2004.

Passes defended by the Houston Texans in 2011, the highest single-season total under Gary Kubiak and the third-best team total overall behind 108 in 2003 and 103 in 2004.

Here's your reminder that it returns January 19 and Burt Reynolds has a cameo!!

But the Sugar Bowl was pretty nerve-wracking (GO BLUE!), I am drunk, and I am going to bed. 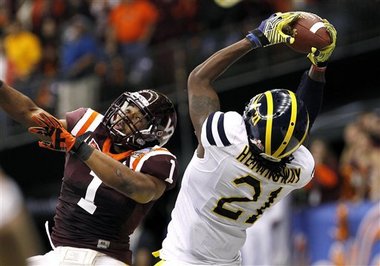