Thoughts On The Playoffs

Share All sharing options for: Thoughts On The Playoffs

I first started posting on BRB in May 2008. The community was a lot smaller in those days, but the insight, wit and self-deprecation that have been hallmarks of this blog have remained intact despite the community continuing to grow. One of my favorite comments from the early days was the time that I announced, with about six or seven minutes left in the game, that the Texans were going to beat the Colts. Minutes later the Rosencopter happened and I nearly slit my wrists.

Now we find ourselves on the doorstep of something that will never happen again: our first playoff game. Win, and we will have the exact same number of playoff victories in our history as the Cowboys have in the same time period. Lose, and we're still not owned by Jerry Jones. In some ways, we've already won.

I know that you are all unbelievably pumped to watch the game this weekend. So am I. It's unfortunate that I have to watch this alone and can't share this experience with my fellow Houstonians, but that doesn't mean that I won't be rooting like hell for the Texans to win this weekend. It reminds me of the 2002 World Cup, which took place when I was living in the Caribbean. I woke up at some godawful time (I think it was 2:00 a.m.) to watch the U.S. play Portugal, and it was the hardest thing ever not to wake up my entire apartment complex when the U.S. won. That's going to be me this weekend.

I was going to try to write some kind of inspirational post for the occasion, but Vega beat me to it. If you haven't read his masterpiece, please do. It pretty much sums everything up and, if you weren't ready to run through a brick wall before, you will be after you read it. Like some of my fellow BRB writers, I have my playoff-related thoughts as well. Stick with me through the jump and I will share them with you.

A few weeks ago, I used one of my favorite images as a metaphor for the Texans' season. The Texans' season, I argued, was akin to a journey down a desert road with a large rock obstacle off in the distance. Beyond the obstacle lay the unknown. Here's an image I included just to reinforce the point. 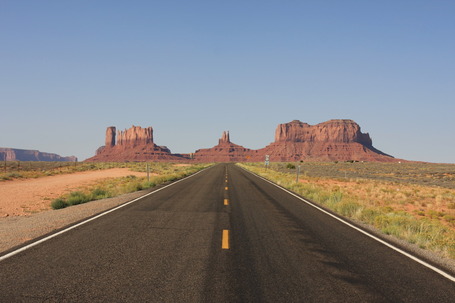 We are now at that rock formation.

With every yard that our metaphorical car gets closer to that formation, we will begin to get a glimpse of what lies behind it. It could be open road with nothing ahead but miles of sagebrush desolation. It could be a dead end. It could be Godzilla. We don't know yet. But with each passing foot, the going seems to get slower and slower. It's like we'll never get around that damn mesa.

But we will. And once we do, we will be past it before we know what happened. We will either be convinced that the Super Bowl is ours for the taking or digging into our bleach cliches. I still remember how awesome it was when Tony Zendejas kicked that game-winning field goal to beat Seattle in the Astrodome all those years ago. I hope that we win and that it feels as good.

I also still remember, very clearly indeed, how it didn't hurt to watch the Oilers cough up that big lead against the Frank Reich-led Buffalo Bills. It didn't hurt because I was numb. I will never forget feeling like I really should have been hurting more, but there was a hole in my soul where my emotions should have been. To be honest, I would rather have had the hurt.

And I remember, very clearly, with even greater pain than the Bills loss or the loss to the Joe Montana-led Kansas City Chiefs, the loss to the Titans on Monday night a few years ago, courtesy of Kris Brown shanking a game-tying field goal attempt. Oddly enough, that loss hurt me more than any other loss I've ever experienced. More than the Astros' Game One loss to the White Sox, which I watched while transiting through LAX on the way to Papua New Guinea. More than Ajax's loss to AC Milan in the Champions League quarterfinals. Almost as much as the day my first real girlfriend ripped my heart out of my chest, pretended like it was a trampoline, and left it there, its beat barely detectable, on the sidewalk.

Amazing thing, how a team that gives you more pain than joy can have you coming back for more, year after year, innit? And yet here I am. If this were a relationship I'd be the one hoping that the Texans came back to me after they got hammered and went home with a different frat boy every day for ten weeks in a row, only coming back around to me when everyone was away for Thanksgiving. Not that this has ever happened to me. Promise.

Personally, I think we're going to win this game. We beat this team on the road without Andre Johnson. WeeJay has more experience running this offense. Wade Phillips will have the not-so-enviable task of keeping Brian Cushing from ending all of existence as we know by focusing his Achillean-rage on Andy Dalton. Brooks Reed will harness the Power Cosmic and glide around the Bengals' offensive line to prepare the way for J.J. Watt's arrival and the subsequent eating of Andy Dalton's soul. Arian Foster will seduce the Bengals' defense with his cutbacks, which are on loan from God. They will start out wanting to pulverize him, but by the end of the game, they will want to tango with him and have him whisper sweet nothings in their ears.

And Andre Johnson. Andre Johnson will end, once and for all, the sublimely idiotic argument that Larry Fitzgerald is a better wide receiver due to his one good playoff run a few years ago. 'Dre will show the world that love exists, and it is expressed through the simple act of catching the football and dragging three people into the endzone with you. Dre will solve Fermat's Last Theorem on his way to the endzone. He will decipher the Phaistos Disc. He will transcend sport and merge with the cosmos to create touchdown after beautiful touchdown.

One last thing. As we are hopefully celebrating a victory that will be a true watershed in our team's history, let us spare a thought for two men: Matt Schaub and Mario Williams. We all know what kind of heat the front office took for taking Mario. Kubiak took a lot of heat for trading to get Schaub from Atlanta as well. Both of these moves were absolutely the right moves to make, and they both turned out great. And yet, because our team is apparently cursed, neither man is able to take his place in the huddle for this occasion. And that is a tragedy.

It's getting late here, and I have to go to bed. I will need to guard my sleep carefully since I will be up late/early on Saturday. I will leave you now with the following thoughts:

The Texans are in the playoffs. For the first time ever. Enjoy the shit out of every second.