Watt: My name is J.J. Watt. You killed my inside linebacker. Prepare to die. Tebow: It wasn't me, J.J.! I swear!

Picture this scene in your mind:

It's Monday night, your Houston Texans are engaged in glorious battle against the woefully anemic New York Jets. By happenstance, you are here: 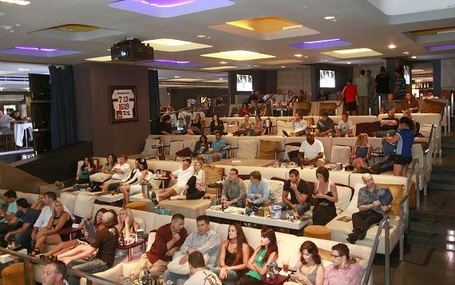 At Lagasse's Stadium in the Palazzo in Las Vegas, where this particular seating section costs $100 minimum per person in food and drink to sit. The room is filled with a 70/30 mix of Texans to Jets fans when suddenly the room goes silent as Brian Cushing goes to the ground and doesn't get back up. You could hear the clang of slot machines from the casino outside if not for one fan who, after several Cuba Libres, screamed at the top of his lungs "NOOOOOOOOOOOOOOO!!!!!" Every person in the room turns their head toward that fan. Even the waitstaff freezes in place as they stare blankly at this schmuck decked out in a Battle Red Blog t-shirt.

It wasn't a good day to be that guy. As for me, I was too busy worrying about point spreads and whether I'd be able to make a parlay on the games of Week Six before I left. But before that, let's look at how we've fared so far this season.

...You didn't really think that was me, did you?

Pittsburgh Thieves at Tennessee Traitors - If you throw in the referee crew from Super Bowl XL, this would be the game that I would pray to Durga for the stadium be struck by a meteor, consumed by a sinkhole, and hope that both teams come down with an exceptional virulent strain of radioactive ebola-herpes all at the same time. Despite the prop bet I saw on this actually happening (4000-1 odds), it seems unlikely and the BESFs are too much of a joke to be taken seriously right now. Pick: Thieves

Arlington Cowfarts at Baltimore Ravens - On the face of it, this doesn't look like much of a contest. But when you take a good close look...it's still not much of a contest. The Ravens are the second best team in the AFC and they'll want to get that "ugly win" taste out of their mouths. Pick: Ravens

St. Louis Rams at Miami Dolphins - The Rams are in a three-way tie for second in the NFC West, but I still say the Dolphins are the better team here. Plus, any team that has Cortland Finnegan playing for them ought to lose just on moral grounds. Pick: Dolphins

Detroit Lions at Philadelphia Eagles - While in the City of Brotherly Love, Ndamukong Suh should find a Philly P.D. mounted officer and punch the horse square in the face. C'mon Suh, do it for Mongo. FOR MONGO!!!! Pick: Lions

Cincinnati Bengals at Cleveland Browns - Andy Dalton, I hold you personally responsible for squelching my 12 team parlay on Sunday and costing me $35,000 in the process. As such, I hope something incredibly unpleasant happens to you, such as Joe Thomas sitting on your head or you wake up next to Ben Roethlisberger who greets you with, "Mornin', sweetcheeks." But seriously, the Browns drop another one. Pick: Bengals

Indianapolis Colts at New York Jets - Speaking of Brian Cushing, I would like to take this opportunity to open up the "Matt Slauson Memorial Bounty Fund" to anyone willing to chip in. I'll even put in my winnings from this week to start up this entirely fictitious fund. As for the game itself, I think the Jets will get overconfident about how they fared against our beloved Texans and get royally Luck'd up by the Colts. Pick: Colts

Kansas City Chiefs at Tampa Bay Buccaneers - All kidding about Slauson aside, Eric Winston was right. Cheering for someone when they're injured is cheap, classless, and just a really shitty thing to do. And Chiefs fans deserve to suffer for such disgusting behavior; I think being forced to watch Brady Quinn play week in and week out is a good first step. Pick: Buccaneers

Oakland Raiders at Atlanta Falcons - Oh, right, I forgot there was another 5-0 team in the NFL. As much as I'd like the Falcons to lose, I don't see it happening. The Raiders rank near the bottom of every defensive category according to Football Outsiders and the Falcons are in the top 10 offensively. It shouldn't be close...sadly. Pick: Falcons

New England Patriots at Seattle Seahawks - This is going to be one hell of a game, at least on one side of the ball. Will the high-flying Patriots offense keep rolling or will Seattle's stingy defense stifle them? I think the Seahawks force Brady to make just enough mistakes to edge out a win. Pick: Seahawks

Buffalo Bills at Arizona Cardinals - I thought the Bills were supposed to be the trendy playoff pick this year, but it looks like, at this rate, another year on the outside looking in. I would feel bad for them, but since they lacked the basic decency of preventing the Music City Miracle from occurring in 2000, I can't muster THAT much sympathy. Pick: Cardinals

Minnesota Vikings at Washington Redskins - When Robert Griffin III went down with a head injury last week, did anyone else have visions of John McClain playing Kathy Bates' role in "Misery?" If so, do you wonder if that's what's prompting Griffin's speedy recovery? I don't wonder. I do wonder who will win this game, as I think it's a close call. But since I have to pick someone, I think the Vikings should pull this one out against a struggling (according to FO) Redskins defense. Pick: Vikings

New York Giants at San Francisco 49ers - It's a rematch of last year's NFC Championship Game, only this time, the ending will be different. I predict Eli Manning struggles against that Niners defense and comes off worse for it. Pick: Niners

Green Bay Packers at Houston Texans - Before Cushing injured his ACL, I liked the Texans' chances a lot better than I do now. Not having to deal with Cedric Benson running the ball will make Wade's life easier to a certain extent. But Tim Dobbins is better suited to run defense than covering receivers, and that's what worries me about this game. And then I remember the Seahawks getting eight sacks in a half against that porous offensive line and I think the Texans have a damn good shot at 6-0. Pick: Texans

Denver Broncos at San Diego Chargers - I would not have expected the Manningful Broncos to be sitting behind the Chargers for control of the AFC West, and yet here we are. While it's still too early to call it a two team race, this game will either give the Chargers a commanding lead in the division or bring the Broncos even for the lead. I say you only discount Peyton Manning at your own peril, so I'll say the Broncos win here. Pick: Broncos

So there are your picks for this week. If you have any thoughts you'd like to add or provide your own picks, feel free to do so in the comments section below.