Think of this post as the pre-game introduction if Hate was a player. Texans v. Ravens.

IT'S ALL IN THE GAME, BABY.

Not counting the time my grandpa got lost trying to get out of Washington D.C. around 10:30pm and somehow wound up near Barclay and Lanvale before he realized we were going the wrong direction -- we were trying to get from D.C. to Reston, VA -- I have never been to Baltimore. So my opinion of the Charm City is basically informed by "The Wire," the Baltimore Ravens' roster, and what I know of Ravens fans. Given how little The Pregame is concerned with things like "accuracy" and "fairness in reporting," this seems like plenty of background information from which to draw sweeping conclusions. Because, to quote Slim Charles,"If it's a lie, then we fight on that lie -- but we gotta fight."

As a group, Ravens fans reflexively hate Steelers fans. You would think that this would somehow make Ravens fans a likable lot, considering how horrid Steelers fans can be. But such an assumption ignores important context: these are fans of a stolen team who have happily cheered for a[n alleged] murderer for years.

To be fair, which I suppose we should be from time to time in these posts, they also had a team stolen from them in 1984. So maybe it's fitting, in an Omar Little sort of way, that they were fine with simply stealing a team from some other fan base. And, hell, maybe it's even fitting that a bunch of people rooting for a team in a place as violent as Baltimore would so happily embrace Stabby McLinebacker as the face of their franchise.

They are defensive about their (ALLEGEDLY) murderous defensive leader. "He was acquitted," the Ravens fan will shout when reminded that Ray Lewis (ALLEGEDLY) had something to do with the murders of Jancith Baker and Richard Lollar. That the Ravens fan who is shouting this response is clad in purple-camo somehow explains why they would also choose to ignore that Lewis wasn't acquitted; the murder and aggravated assault charges against him were dropped . . . once he agreed to plead guilty to misdemeanor obstruction of justice and testify against the two other men who were charged.

That's right -- Ray Lewis is a punk snitch of the highest order. He deserved the Randy Wagstaff treatment. Instead, he got a slap on the wrist in the form of one year of probation, freeing him to do his spastic pregame dance and record tons of tackles jump on piles and get credit for tackles that aren't his. Maybe Bunk was right: You can go a long way in this country killin' black folk.

But, like I said, Ravens fans don't care about any of this. All they care about is convincing you that the 2000 Ravens' defense was better than the 1985 Bears' (it wasn't), that Joe Flacco is an elite QB because he "just wins" (he isn't), and that Ravens fans are as tough/crazy/violent/whatever as Eagles and Raiders fans (they aren't, unless the "whatever" stands for "in need of forced sterilization").

1. History. Your Houston Texans have never beaten the Baltimore Ravens, which is something that CBS, NFLN, and ESPN will remind you of roughly 650 times between now and kickoff. Of the three teams the Texans have never beaten, the Ravens hold the distinction of being the only team to include a playoff win in their total. Should you hate a team simply because you haven't beaten them in six tries? I see no reason NOT to.

2. The Accent. Oh, God, The Accent. The worst part of season 2 of "The Wire" was that godforsaken dialect of the dockworkers in south "Bawlmer." No, I don't want to go "downy aycean" (down to the ocean) with you. I don't care if the "wooder" (water) is great this time of year. Also, you reek of Old Bay. Like, seriously, quit putting it on everything, hon.

3. Jacoby Jones. I don't necessarily hate Jacoby Jones. But for him to sign with the Ravens after his botched punt return against them was a pivotal point in the playoff loss, only to show up in Baltimore and look like an NFL-quality return man? I'm miffed. And "miffed" becomes "seething with white-hot haterage" during the week that Jacoby returns to the scene of so many "damn it, Jacoby!" moments.

The mascot is a reference to Poe
And it's really quite fitting, you know
So dark and so cheerless
And, as an analogy, peerless
For describing modern-day Baltimo'.

THREE OF THESE STATEMENTS ABOUT BALTIMORE ARE TRUE.

1. It is illegal to take a lion to the movies in Baltimore.

2. The Baltimore Stallions -- what, was Evening Stars too obscure? -- were the first and only US team to win the CFL's Grey Cup, but the city quickly stopped caring about them as soon as they stole the Browns from Cleveland.

4. The makers of the Grand Theft Auto videogame franchise originally wanted to set the game in Baltimore, but decided against it because it was "too depressing, violent, and generally shitty to be believable, even in a game."

"It's Baltimore, gentlemen; the gods will not save you." -Deputy Commissioner Ervin Burrell 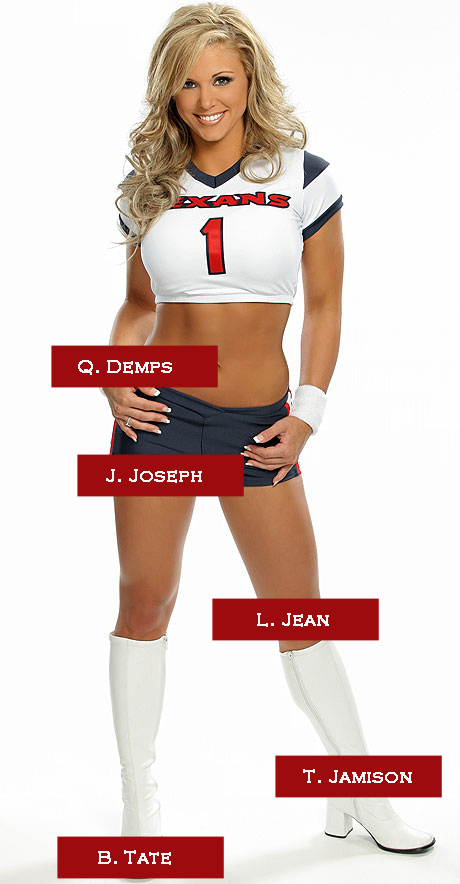 Quintin Demps (Inability to comfortably dance like Grandmaster Flash commanded). Demps has injuries to both his thumb and his forearm, and he's been limited in practice so far this week. If he were a competitive arm wrestler, he'd definitely be out for Sunday. As it is? Battlin'.

Johnathan Joseph (Crotch funk). Joseph's groin injury has kept him out of practice all week, though that has been by design in the hopes that he can go Sunday. I'm betting he will. You lingered over his name on the injury picture, didn't you?

Lestar Jean (Wonky hinge). La estrella has had a full practice schedule so far this week. Which is good, because I'm already tired of seeing forced redzone throws to Keshawn Martin.

Tim Jamison (Felled by Paris' arrow). Everyone's favorite Wolverine is out for the year. Damn it.

Ravens MLB Ray Lewis (Stabbing pains in his karma) - Out.