Share All sharing options for: Pickin' Winners and Eatin' Wings (Week Eight), Or: Picks of Cydonia

Looking back on last week's picks, which I don't recommend by the way, made me think: Self--which is what I say when I talk to myself--I said Self, if you were only as good at making these picks as you are at making people itchy for hot, delicious wings, you might have won that parlay you laid down in Vegas a couple of weeks ago (again, damn you Andy Dalton!!!). But apparently it is not fated to be so.

No matter, I still have the Texans' 6-1 record to pick up my spirits. And though the off week has claimed our Houston Texans this week, and my ability to make picks ranks well below that of certain cephalopods who have since gone to that sushi restaurant in the sky, I know I can still make even the most stoic man act like a meth addict coming off a three week bender at the merest mention of Buffalo Wild Wings...you know who you are.

Ode To A Sauce (otherwise known as "Really Bad Poetry")

This week, we pay homage to a sauce that while not quite as spicy as Thai Curry, offers a different kind of kick, an Italian kind of kick. 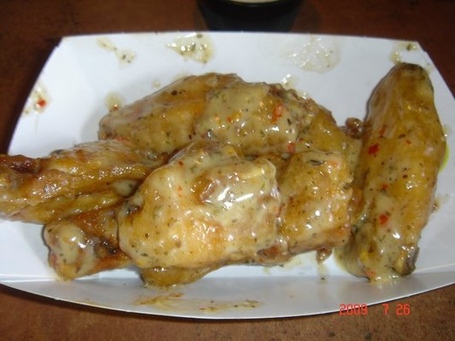 Garlic, Italian herbs, and Parmesan cheese,
No fear of vampires have I after eating these
Creamy and tangy with just a little kick
Eat too many, though, and you might get sick

I suppose we should make our picks now, shouldn't we?

Off this week: Buffalo Bills, Cincinnati Bengals, Baltimore Ravens, Houston Texans (a.k.a. The Only Team That Matters)

Tampa Bay Buccaneers at Minnesota Vikings - Adrian Peterson has been beasting this year, he's only seven yards off the pace of the league leader in rushing: some guy named Arian Foster. Any of y'all ever heard of him? Anyway he's going up against a stingy Bucs run defense that has only allowed 76 rushing yards per game. Okay, I'm out of ideas to make Thursday Night Football interesting. I'm still going with AD and the Vikings here. Pick: Vikings

Washington Redskins at Pittsburgh Steelers - You know what I heard? I heard Robert Griffin III could jump over the entire Steelers defense in a single bound, and on Sunday that he'll consume the English Steelers with fireballs from his eyes, and bolts of lightning from his...well, you know the rest. The Steelers defense is old and I don't think they'll cope with the wondrous glory that is RGIII (ed. note: this pick written by Texans "beat writer" John McClain). Pick: Redskins

Seattle Seahawks at Detroit Lions - Did you know that one Ndamukong Suh is roughly equal to 2.5 Russell Wilsons? It's because he's a tiny, tiny man; in fact, you could probably fit him in your pocket if you ever caught him. Or am I thinking of leprechauns? Wilson could use a leprechaun, away from the friendly confines of Century Link Field (the CLink), Russell has turned the ball over 7 times. Luckily, Detroit has one of the worst turnover ratios in the league (-5). So I think Russell has a shot here. Pick: Seahawks

Carolina Panthers at Chicago Bears - Who else out there is hoping that this turns into a defensive battle? I know I am; not because I'm any huge fan of defense, I just want to see the collective pouting and sulking of Cam Newton and Jay Cutler. The 1-5 Panthers haven't exactly been lighting the world on fire, and the Bears are having a very good season. I think the choice is pretty easy here. Pick: Bears

Atlanta Falcons at Philadelphia Eagles - The Michael Vick experiment seems to be come to, depending on how you view him, a very satisfying conclusion. Either way the game ends works for me. Either the Falcons lose and the Texans are again tied for the best record in the league, or the Falcons donkeystomp the Eagles (preferably) and send the team, and its quarterback, scrambling for damage control. My heart says the Eagles, but my brain says... Pick: Falcons

New England Patriots at St. Louis Rams - It's a rematch of Super Bowl XXXVI when the Pats come marching to London to take on the Rams. I'm pretty much out of subplots for this one. I would, however, like to see Rob Gronkowski go Andre Johnson on Cortland Innegan, you know, to remind us of the fun we used to have with the little runt when he played for Tennessee. Patriots win in a walk. Pick: Patriots

Indianapolis Colts at Tennessee BE-SFs - Andrew Luck worries me. He's a rookie and he may yet lead the Colts to second place in the division if things shake out right. The Colts' schedule is nothing really to write home about; part of that ho-hum schedule are that team with the senile owner. The Colts should win this one; they BETTER win this one if, for no other reason, than to deprive the Colts of additional higher draft picks. Who knows, maybe we'll get lucky and the Colts will languor in the doldrums of perpetual 8-8 seasons. I can dream, can't I? Pick: Colts

San Diego Chargers at Cleveland Browns - As a President/General Manager, Mike Holmgren is, let's just say, lacking. As a coach, he's outstanding, leading two teams to the Super Bowl. Norv Turner's team just blew a massive lead to the Broncos two weeks ago, and Holmgren's kinda sorta said he misses coaching. You think Chargers fans are sending him flowers and chocolates? Even so, the Browns don't win this one. Pick: Chargers

Miami Dolphins at New York Jets - Rex Ryan is demanding an apology from Reggie Bush, apparently. Why this is, I have no idea as I have yet to find a single kitten to give about this "controversy." Oh well, at least it keeps them from talking about Tebow for five seconds. The Dolphins are better than their record would suggest and the Jets are, well, the Jets (in other words, still bad). I like the Fightin' Flippers in this one. Pick: Dolphins

Jacksonville Jaguars at Green Bay Packers - You're welcome, Green Bay; you know, for the Texans allowing you to get your groove back, and after you ROFLstomp the Glitter Kitties, could you go back to losing games again? Appreciate it. Pick: Packers

Oakland Raiders at Kansas City Chiefs - Brady Quinn? I imagine Hell would be full of choices like that: either Matt Cassel or Brady Quinn, you may choose only one. Either way, the Raiders should be able to make it a long day for the Chiefs. Pick: Raiders

New York Giants at Arlington Cowfarts - The Cowfarts flatulated their way to a win, barely, against a terrible Carolina Panthers team last week. And the Giants are hitting their stride, and probably thinking about how their last meeting went. I'll bet just about anything that the Cowfarts lose this game, and as a bonus, Romo goes and throws two interceptions and has one pass go flying past him at the snap. Again, I can dream, can't I? Pick: Giants

New Orleans Saints at Denver Broncos - The Saints defense is terrible. There could be many reasons for this, maybe the change of defensive coordinator/scheme, the lingering turmoil caused by the scandal during the offseason, or the lack of decent bounties to be had; it could be all of them. What I do know is that Peyton Manning is probably licking his chops at the opportunity to pick this unit apart. Pick: Broncos

San Francisco 49ers at Arizona Cardinals - You thought the Seahawks/Niners game was ugly? You ain't seen nothing yet. Two good defenses clash again, this time the offense, save for Larry Fitzgerald, is even worse; or at least the offensive line is, anyway. The Niners were lucky that the Seahawks receivers have large Polish hams for hands or the game could have gotten out of hand early. They can't afford to let Larry Fitzgerald get his catches. But from John Skelton, I just don't see it happening. Pick: 49ers