It's like a college professor talking to Honey Boo Boo. Taking a look at how the Texans' rookies performed in the Week 4 win over the Titans.

I don’t know what it is, but whenever I watch Arian Foster run I can’t get Claire De Lune out of my head. The subtlety of the notes, the melodies, the rhythms; all of them are so quintessentially Foster. The rise and the fall of the music evokes struggle, triumph, love, sadness, and euphoria at the same time. Just as the Houston Texans’ prized running back glides through holes, so does this piece flow effortlessly through a gauntlet of emotional undertones. When listening you can’t help but feel like you’re on a journey, and it’s nigh impossible to not picture a classic slow motion NFL Films montage in the back ground. The images and the sounds on their own are so soothing, but together they are damn near hypnotic. It’s just…bliss.

That being said, when I watched Ben Jones this week I couldn’t get Honky Tonk Badonkadonk by Trace Adkins out of my head. I wish I had an eloquent explanation for that one…I really do.

Anyway, on to this week’s breakdowns.

First up, the aforementioned Mr. Jones (cue the Counting Crows jokes). Houston sets up in a basic power "I" in the red zone, and then motions Kevin Walter in behind Owen Daniels on the strong (left) side. Based on the formation, it basically says power run all the way. Below is a diagram of what pretty much everyone defensive player should have been reading, as it was the most obvious running play that could have come out of this formation. Ben Jones is circled at right guard. 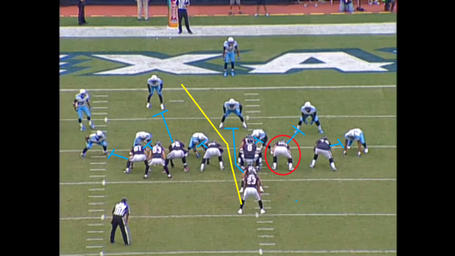 However, knowing that this is a Kubiak offense, it’s pretty much a guarantee that the actual play won’t look anything like the pre-snap read, so we end up seeing a weak side zone stretch. The ball is snapped. Daniels breaks on a drag-out to draw the linebacker just a little bit and keep him thinking about play action (so it’s a fake of a fake of a fake for those keeping score at home). Wade Smith starts taking his man up field while Duane Brown comes in to clean him up once Smith disengages and goes for the linebacker in front of him. Walter moves to cut block the defensive end that Brown did not pick up. Chris Myers takes on the defensive tackle while Jones starts to slip up to the 2nd level. James Casey moves to pick up the free outside linebacker in front of Jones. Derek Newton engages the other defensive end. 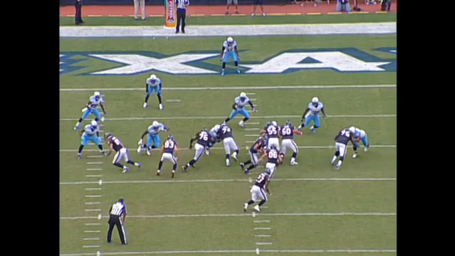 Daniels and the linebacker go out of frame in a sprint towards the sideline (mission accomplished). Walter starts his cut block on his defensive end. Brown starts his cut block on the defensive tackle while Smith passes him off. Jones picks up the middle linebacker to seal the cutback lane. Myers keeps the running lane behind the original read from collapsing. Newton is still holding his ground while Casey shoots through the gap to lay out the outside linebacker. Everything looks good so far for Foster to cut underneath Newton and race the high safety to the pylon. 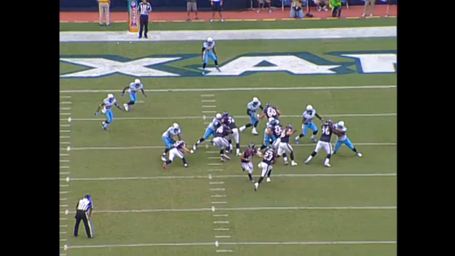 And then in less than a second everything goes to hell. Walter gets his cut block off fine, but Brown’s is less than effective and the defensive tackle barely stumbles. At the same time, Myers loses ground and Casey gets stonewalled by the linebacker, completely closing the hole. Andre Johnson makes an appearance on the right side of the frame, still holding his block. Jones, like the manly man that he is, handles the middle linebacker and keeps the cutback lane secure. Foster reads it and starts his change of direction. 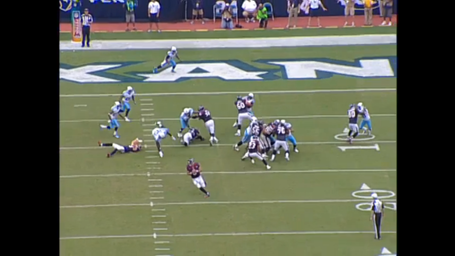 Somewhere in that pack of light-ish blue pants, Duane Brown is lying on the ground. Wade Smith disengages the defensive tackle that was supposed to be cut down and moves towards the safety. Arian is in a footrace to get through the lane before four very large men land on top of him. The bright spot here is Ben Jones, sustaining his block perfectly on the second level and giving Arian room to run away from a whole lot of very angry Titans. 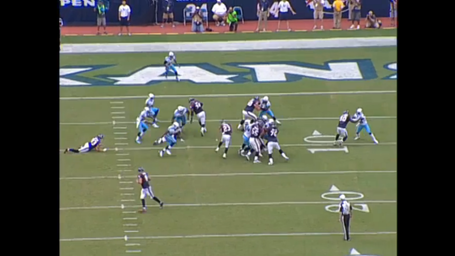 In the end, the defenders close on Arian too quickly and he is brought down after seven yards, but it is seven yards that would not have been gained without one hell of a block by Ben Jones to give Foster something to work with. 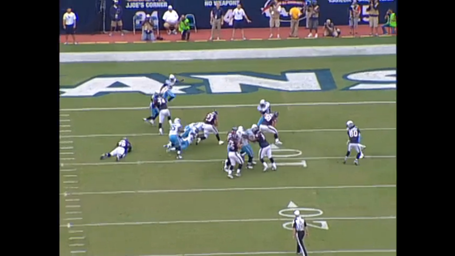 Overall, my man crush for our favorite herbivore knows no bounds. He didn’t have his best game, not by a long shot, but he is as solid as they come. He really doesn’t look like a rookie out there, and that is more than I could ever ask for. Take your time getting better, Antoine Caldwell…we got this.

This is the part of the article where I was going to talk about Keshawn Martin and how unbelievably wide-ass open he seems to get all the time without Matt Schaub ever throwing him the ball deep, but NFL Game Rewind decided to stop working and I have deadlines to meet. Just take my word for it, Keshawn Martin is really, really good at running routes and if he didn’t have the most maddeningly inconsistent hands seen since Jacoby Jones, he would be our most dynamic and explosive weapon by far.