Derek Newton is the only player that makes me want to drink at 9:00 AM while watching tape.

Normally the opening paragraph or two of this article would be some sort of witty commentary about life and/or the Houston Texans, but I’ll admit that after just finishing watching Derek Newton play against the Chicago Bears, I am too annoyed to write anything funny or remotely uplifting. Awful – just awful. I’m not even sure if David Carr’s line would have performed as horribly as #75 did under the Sunday night lights. Originally this post was going to also include Ben Jones (who had a good game as usual) and Jared Crick (who was put in at nose tackle a little bit and didn’t do too badly), but there are simply too many lowlights from Newton to fit anyone else in here. It’s that bad.

I'm quite literally flabbergasted. Let’s just cut to the tape.

Houston is lined up in a "Power I" formation. Newton is circled at right tackle. The Bears are playing a basic 4-3 even with a safety down in the box to play the run on the strong side (Matt Schaub's left). 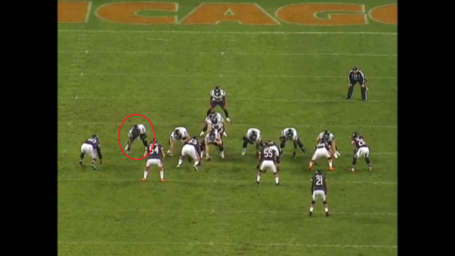 Kevin Walter motions across the formation, which gives Schaub a receiver on both sides of the field. Major Wright, #21, comes up to take him in coverage, leaving a single high safety over the top. 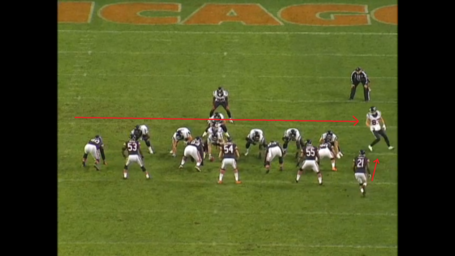 The ball is snapped, and it looks like a run. Wade Smith and Duane Brown double team the defensive tackle while Garrett Graham takes the defensive end one-on-one. Jones jams the other defensive tackle back into Chris Myers and keeps his low hand free to pick up the outside linebacker. Newton takes Julius Peppers one-on-one on the weak side. Unfortunately for Matt Schaub and Arian Foster, Newton's first step is incredibly wide as he anticipates Peppers following him on the stretch to get to the edge and leaves a huge hole over his left hip. What Newton fails to realize is that the easiest to stop the stretch play is to get penetration underneath the blockers to cut off the lane of the running back before the play can develop to the outside.

This means that the offensive line's number one priority is getting on the inside shoulder of their defenders and driving them outward, because even if their defenders have position on the edge, the back can still cut in behind them untouched. That's all one-cut running is, but Newton repeatedly has failed to grasp this concept throughout the season. He too often tries to beat his defender to the edge of the field in order to then seal them back inside to give the running back the corner. Or he just plain ignores the defensive end and goes for a defensive back and assumes that the guard will pick up his slack. That's not how the scheme works, Derek. You should know that by now. You should know that Jones' main responsibility is the middle linebacker while offensive tackles and tight ends take on guys like Julius Peppers. You have one job, Mr. Newton - do it. 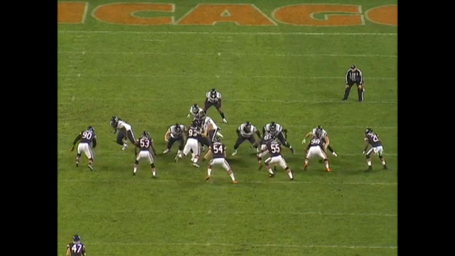 Schaub starts the hand off to Foster as James Casey charges into the hole. Peppers sees the inside lane and clubs Newton's high shoulder. Shocker. 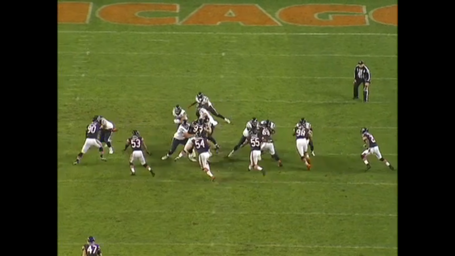 Jones passes off the defensive tackle and moves to pick up Brian Urlacher as Casey keys in on the outside linebacker. Smith, Brown, and Graham hold the strong side, for now. Meanwhile, Newton gets embarrassed by a future Hall of Famer. 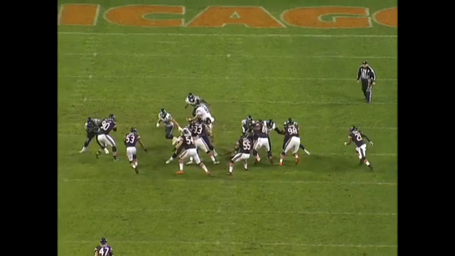 Uh oh, it wasn't a run after all, and Peppers now has an unimpeded lane right at our franchise quarterback. Way to go, Derek. 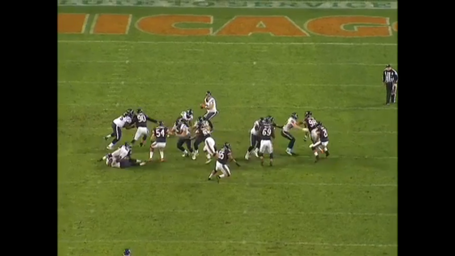 Graham also loses his block, and now Schaub has two very good pass rushers barreling down on him from both sides. 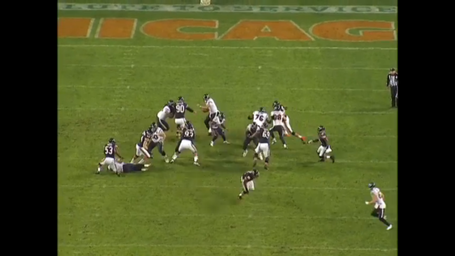 I'm not entirely sure how he avoided the most painful pancake in human history, but fortunately this play ended in the ball just being thrown away. The sad part was that Andre Johnson was open underneath the single deep safety for an easy first down. Darn. 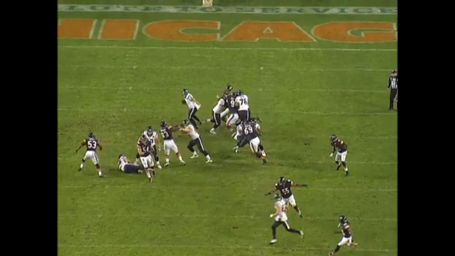 Houston is backed up near their own end zone, so naturally a run is coming. The Texans are in an "Offset I", to which the Bears counter by again putting eight men within five yards of the line of scrimmage. You can't really see him, but Henry Melton, #69, is lined up in the 3-tech just inside of Newton. That's his man. 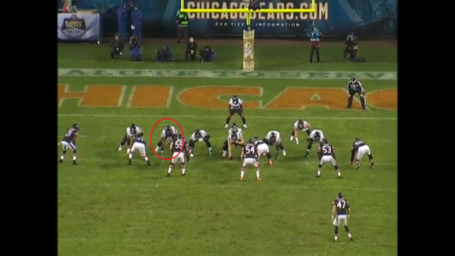 The ball is snapped, and Newton engages. 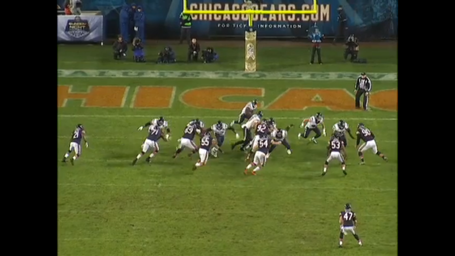 Not a full second into the play, Newton's arms are neutralized and he is yanked by the front of jersey into the ground. 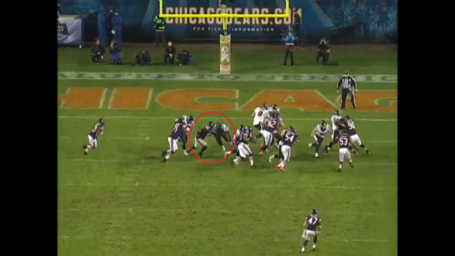 That right there is Newton, face first on the grass, with Melton now racing after Foster without a blocker. Want to guess what happens? 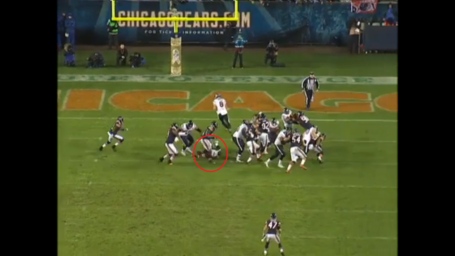 Houston stays backed up in its own end zone, that's what. 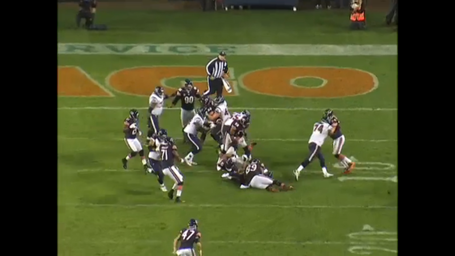 Okay. You're at midfield, it's a heavy set, and you've got single blocking against a defensive end on the weak side that is lined up very far outside. What do you do? 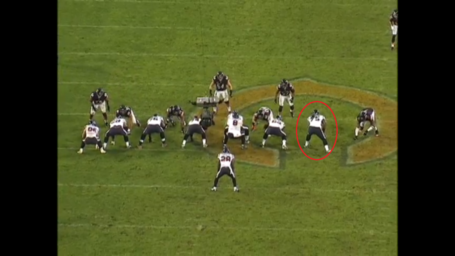 Oh, not squaring up and taking your first step incredibly wide rather than getting low and waiting for him to make the first move? How did I not think of that before? 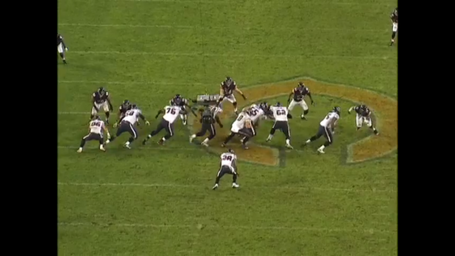 Ah...that's why. Because he beats you inside. Again. 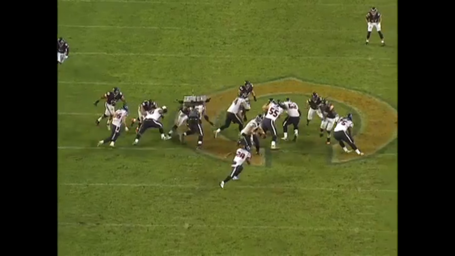 Oh look, a tackle for loss. I feel like explaining the technical side of some of these snaps is pointless because the ugliness is so evident in the picture itself that words are just plain redundant. So, to fill this post in a little bit, here's one of the coolest music videos I've ever seen. Wasn't that awesome? Did it sufficiently cheer you up enough to get you through the rest of this post? Good, because this pain train is only just beginning. 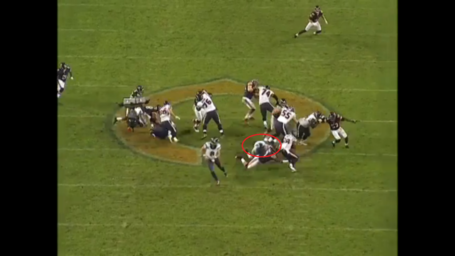 Okay, goal line time. No excuses here, Derek. You're a strong, physical guy. This kind of down was made for you...right? 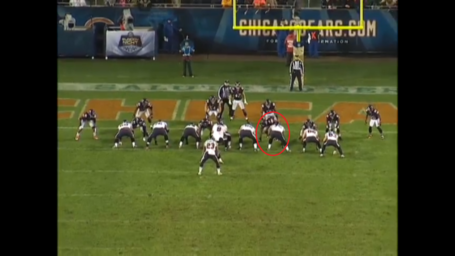 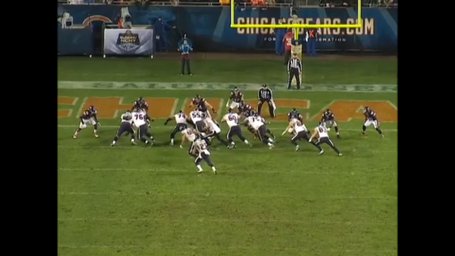 So far, so good. Brown seals the corner out of the play, Casey moves into the hole, Harris kicks the defensive end inside, Smith has the linebacker, Myers plants the defensive tackle, and Newton is at least partially blocking the only other free defender in the area. 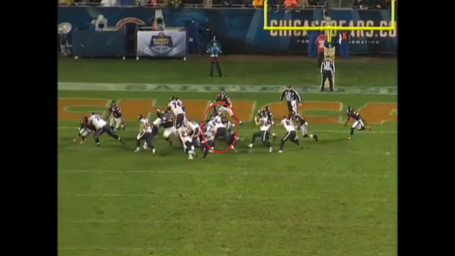 Until, yet again, Melton throws Newton to the ground with one arm and continues on towards Foster unimpeded. Somewhere underneath that pile, my happiness has died. 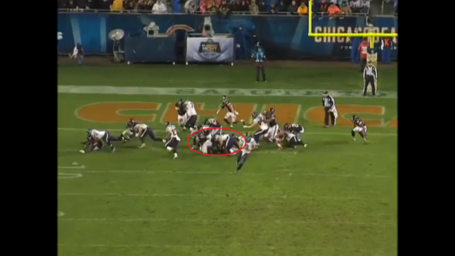 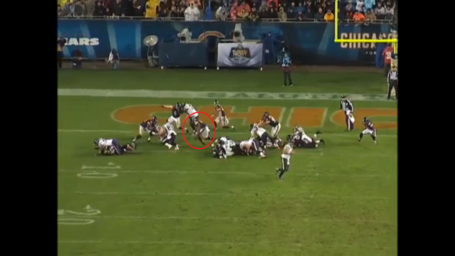 Like a car wreck on the side of the road, you can't look away from the destruction no matter how much you want to. 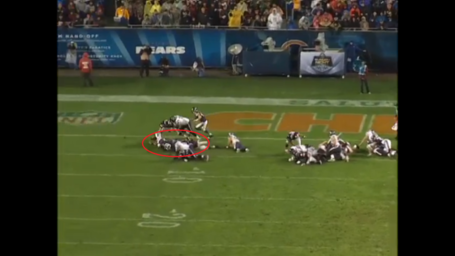 Okay, fourth quarter. Melton's put Newton on his face nearly a half a dozen times tonight, so surely he's learned from it and will improve his technique. It can't happen again, right? 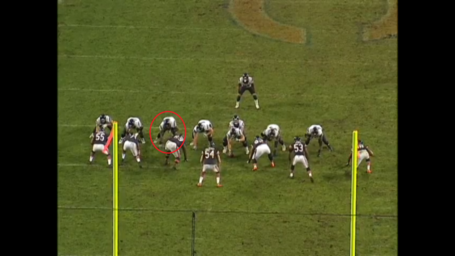 Wait, Derek. What are you doing? 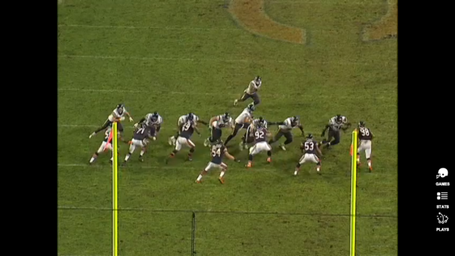 Derek...seriously bro, WHAT ARE YOU DOING? 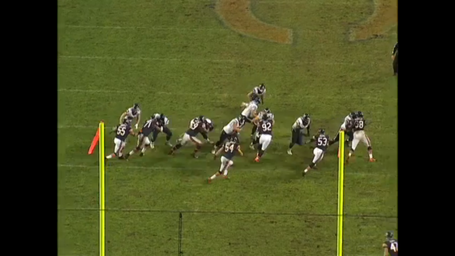 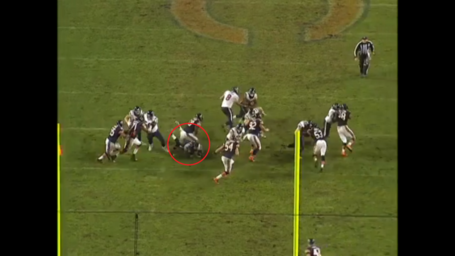 I feel like Henry Melton means "tackle for loss" in some dead language. That, or Derek Newton means "revolving door." Either one will work. 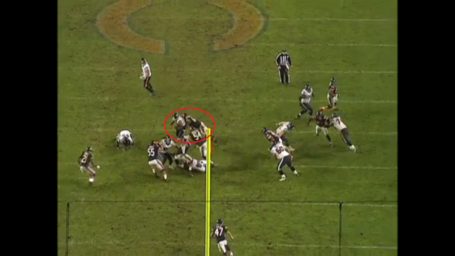 It was really, really hard to write this article. I wanted to take it seriously, but I just couldn't do it with the tape on display being so laughably bad. Derek Newton couldn't run block, he couldn't pass block, and his technique in all phases of the game was so telling of a seventh round gamble that offensive tackle is now firmly on top of my "positions to draft" list. I just can't take the inconsistency from week to week. With Rashad Butler being a walking injury and Ryan Harris not showing anything to prove he's the answer, I would be more than happy to move up from the 32nd pick to get pretty much anyone over 290 pounds who played in the Big Ten. Please, Rick, I can't watch this anymore.