You think we can't find a way to hate Jacksonville? Please. Hate is what we do. We got this.

If your Facebook friends contain an ample number of morons, you've almost certainly seen some of them posting a different thing each day for which they are thankful. These tend to run from the inane -- "I'm thankful for coffee! LOL!" -- to the ridiculously trite -- "I'm thankful for my friends!" (There are many, many exclamation points in the majority of the posts. Morons love them some exclamation points.)

I mention this because there is at least one thing for which I am incredibly thankful. Namely, I'm thankful that I wasn't doing these Pregames prior to the first game against the Jags, because I don't know how in the world I could squeeze two games' worth of hate-filled posts out of something as bland and uninteresting as Jacksonville, FL, and its (allegedly professional) football team.

Jacksonville, FL, is the largest city by area in the contiguous U.S., which may strike you as bizarre, given its population of less than 830,000 in the city proper. Jacksonville holds this distinction, however, because in the 1960s, the city and Duval County governments were so inept (all 15 public high schools in Jacksonville lost accreditation in 1964) that they ultimately consolidated the city and county governments, meaning that "Jacksonville" is technically all of Duval County, save for the communities of Jacksonville Beach, Atlantic Beach, Neptune Beach and Baldwin. Calling yourself the largest city in the U.S. when you are really claiming the entire county is a lot like climbing up on your roof and proclaiming yourself the tallest man in the world. Which is to say, it makes you look like a moron.

Jacksonville also has an amazing ability to produce something awesome, then turn around and produce something so terrible that it makes you forget the earlier success. For example, Lynyrd Skynyrd and the Allman Brothers both formed in J'ville in the 1960s. Awesome, right? Then they produced Limp Bizkit, who single-handedly set music back 5 years in the 1990s. Baseball stars Vince Coleman and Glenn Davis are both from Jacksonville, but so are Brett Myers and Jonathan Papelbon. Brian Dawkins is from there, but so are Dez Bryant and Tim Tebow.

The Jaguars are kind of perfect for Jacksonville in this way. They went in just five seasons from an expansion team to a 14-2 team in 1999, where they sent Dan Marino into retirement with a 62-7 beating. Then they lost the AFC Championship game and began their slow descent into mediocrity (or worse). Since 1999, they've made the playoffs only twice and have struggled to even have winning seasons, prompting fears (from Jacksonville fans, assuming they exist) and laughter (from the rest of us) about the team possibly moving to Los Angeles or London or basically anywhere but Jacksonville in the near future.

Perhaps the best example of why I am thankful that I don't have to write about these clowns more than once, however, is their regional cuisine. They don't have one. That's how boring the town is. Nearby St. Augustine has Minorcan clam chowder, a tomato-based concoction that is made with the locally grown datil pepper. Jacksonville has nothing like that. They have some half-assed attempts at BBQ, where they manage to screw up a South Carolina/Georgia-style mustard sauce and ladle it by the gallon over underflavored pulled pork piled on white bread. In fact, the difference between Texas-style brisket and whatever that is that passes for BBQ in J'ville is a perfect analogy for the difference between the Texans and whatever that is that passes for a football team in J'ville. Screw those guys.

1. He Did It All For The Nookie. I know I already mentioned Limp Bizkit. They deserve a second appearance in this post, if only because no one in the history of the world has ever needed to be punched in his stupid face more than Fred Durst does. And, by "punched," I mean "kicked repeatedly by a large person wearing golf spikes."

2. The Q-Tip. Among the many, many reasons that I've been so thrilled to see Glover Quin become a ball-hawking, QB-destroying safety is because I feel like part of the reason he hits people so hard is that he's constantly trying to exorcise the demons of November 14, 2010. So, Blaine Gabbert, when Glover ultimately hits you so hard that you evacuate your bowels, just know that it's all David Garrard's fault.

3. Tony Boselli. I know that the Texans took Boselli so that Jacksonville would leave Gary Walker and Seth Payne unprotected in the expansion draft. I get that. Still, if you're starving to death and I tell you that I'll give you a sandwich and a bag of chips, but only if you first let me use your face as a bidet, then I'm a jerk, no matter how good the sandwich and chips ultimately are.

THREE OF THESE STATEMENTS ABOUT JACKSONVILLE ARE TRUE.

1. Jacksonville is named for the first military governor of Florida, future president Andrew Jackson, who had the good sense to never actually visit the place.

2. The Florida constitution was amended to make it illegal to keep pregnant pigs in a cage.

3. The first college football game in Florida was played in Jacksonville between Florida Agricultural College and Stetson University.

4. Older residents of Jacksonville have petitioned to remove Blaine Gabbert as QB because his playing style "uncomfortably reminds residents of the destruction caused by the Great Fire of 1901."

"Believe me, this country has been greatly overrated. One acre of our fine Tennessee land is worth a thousand here." --Andrew Jackson, speaking about Florida, and inadvertently providing meta-lulz for smart-assed Texans fans in 2012 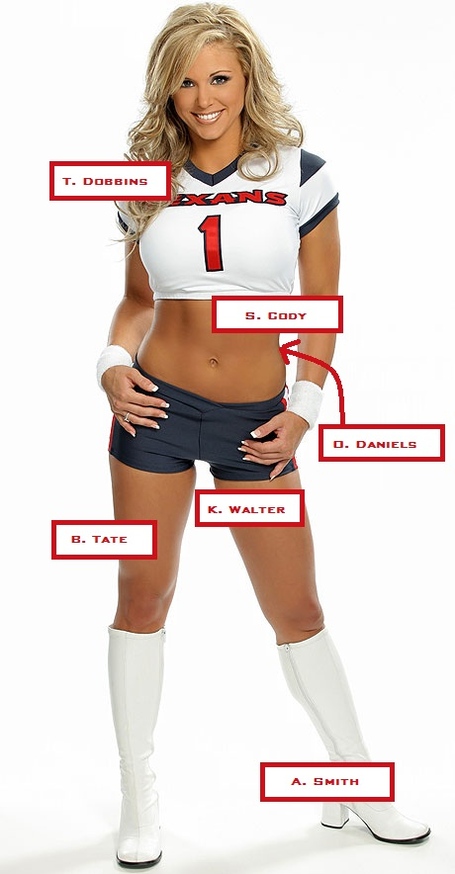 Tim Dobbins (Too Much High Fiving Post Cutler Hit). Dobbins has a bum shoulder and was limited in practice. I'm guessing he plays, only because I'm hoping to limit the amount of Barrett Ruud in my life.

Shaun Cody (Wag Gone Bad). His rib and back are still jacked up and he's been limited in practice all week. Insert your own joke about whether his limitation in practice was visible.

Owen Daniels (Backbackbackbackback). I have no idea why I just did a Berman thing there. That's my bad. Daniels has been limited this week, but rumor is he'll play. (Note: I just made up that rumor).

Kevin Walter (Battlin' Casualty). Walter's groin is having issues, which is rarely a good thing.

Antonio Smith (Samur-oww). Slight ankle issue that probably slows his smoke-bomb-related escapes, but doesn't impact him against the worthlessness that is Jacksonville.

Jaguars RB Maurice Jones-Drew (Not Tall Enough To Fly Without Adult Supervision) - Out.

Jaguars RB Greg Jones (Strain From Weight Of Constantly Having People Think This Is The Year He Matters) - Questionable.

EverBank Stadium Tarps (Not Needed In A Real Stadium) - Out.