NOT EXACTLY A SECRET.

Lots of places have a local or regional cuisine that, over decades of practice, has made their versions markedly better than what you find outside that place/region. Two of the most obvious examples are near-and-dear to the heart of Texans fans -- Mexican food and brisket. Sure, you might find good Mexican food in other states (New Mexico and Arizona, for instance), and you can get some quality brisket in Kansas City, but your odds of finding really great versions of each increase exponentially as you get closer to Houston. Similarly, Cajun and creole dishes become a risky proposition once you stray too far from the gulf coast, as anyone with the misfortune of having tried a po' boy in Omaha can attest.

Despite the protestations of people from upstate New York, however, Buffalo wings are not this type of dish. "Oh," they protest through orange-stained jowls, "You haven't had a REAL WING until you've had one from Duff's/Anchor Bar/some other random place you'll never go because it's in Buffalo!" The difference, according to them, is that nobody outside of Buffalo makes the sauce correctly. Well, spoiler alert: the "real" sauce is nothing more than Frank's hot sauce, butter, a little vinegar, and a tiny bit of cayenne. Pretending like no one outside of Erie County can combine those ingredients in the quite the same way is like pretending that no one outside of central Tennessee can make meth quite as well as they do in Titans country. Which is to say, just because you are good at it doesn't mean it's something special that anyone who is not a product of incest can't also do well.

The other "secret" to making wings like they do in Buffalo? Apparently, you have to make sure you fry the wings long enough that they are crispy. WHY HAS NO ONE ELSE THOUGHT OF THAT?! What's that? They have? Oh. Nevermind.

This whole "you can't get good wings outside of Buffalo" mentality is what led to the creation of Buffalo Wild Wings, in fact. In 1981, a Buffalo native was in Kent, Ohio, and he couldn't find wings -- because, apparently, that is literally anyone from Buffalo ever eats -- so he and a friend decided to open a wing joint in that festering armpit of tattoo-scandals, Columbus, OH.

Because "Wings For Jagoffs," while accurate, was unlikely to attract the student population in sufficient numbers, they called their place "Buffalo Wild Wings & Weck." Weck, for those of you fortunate enough to not know, is short for "kummelweck," which is a caraway-seed-topped roll on which beef sandwiches are frequently served in western New York. Imagine an Italian beef sandwich if you replaced the giardiniera with seeds that taste like black licorice. (Seriously, what's wrong with people from Buffalo? Is it the snow? It has to be the snow.)

I guess my point is this: Buffalo wings are a fine food. In certain settings, they are on the short list of things you'd most like to eat. But unlike a true regional delicacy that requires knowledge and skill in preparation, cooking method, and development of flavors, wings are just deep-fried pieces of chicken tossed in some hot sauce and butter. To suggest that you have to go to Buffalo to get the best version of that requires a level of delusion that would also let you believe that Ryan Fitzpatrick's $10M+ cap hit over the next three seasons is not going to be a huge albatross around your collective, greasy, frostbitten necks.

1. What The F&^k Is A "Goo Goo Doll"? I don't actually know, nor do I care to find out, but I do know that the band hails from Buffalo, which is the main reason that Buffalo's population has declined steadily since the mid-1980s. (Note: I am not a demographer, but my sociologist wife suggests that my science might be flawed here. Whatever. She probably likes "Iris," too.)

2. Ghosts of 2005. On November 27, 2005, your Houston Texans took on the St. Louis Rams at Reliant. Rams starting QB Jamie Martin (lol) was knocked out of the game early, and the Texans jumped out to a 24-3 halftime lead. Then Dom Capers and Vic Fangio conspired to make Ryan Fitzpatrick, in his first game ever, look like vintage Joe Montana, going 19-30 for 310 and 3 TDs, beating Houston 33-27 in OT.

3. January 3, 1993. Frank Reich is a stupid jerk. He probably likes that a U.S. President was assassinated in Buffalo.

When you overpay for a player like Fitz
And have Wannstedt calling your blitz
You've stopped even pretending
That you have hopes of contending
'Cause your owner does not give two shits.

THREE OF THESE STATEMENTS ABOUT BUFFALO ARE TRUE.

1. In 1900, Buffalo was the eighth-largest city (by population) in the United States.

3. Buffalo's finances were so bad, and their elected officials so inept, that the Buffalo Fiscal Stability Authority was created and given oversight over all major expenditures in 2003.

4. In his wrongful-death trial, O.J. Simpson admitted on the witness stand that his time in Buffalo made him devalue human life.

"To commit suicide in Buffalo would be redundant." --Harold Arlen 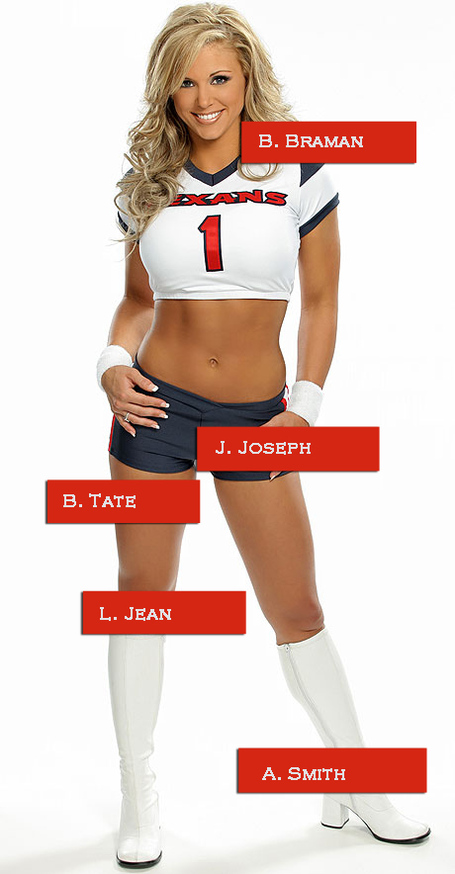 Bryan Braman (Doctor say he need a neckiotomy). Braman has an injured neck. I'd make a joke about tackling without a helmet here, but that seems pretty contrived. So, uh . . . shrooms. Whatever.

Johnathan Joseph (Priapism). Joseph's groin injury had him slightly hobbled going into the curbstomping of the Ravens. The throbbing erection left over from that game is still a problem, but not such a problem that he won't play Sunday.

Lestar Jean (Leknee). The surefire HOFer, whose blood is said to contain the cure for cancer and the common cold, is pretty much back from the earlier knee injury and is likely to play.

Antonio Smith (Ninjury). The assassin has an ankle issue, which probably prevents him from stealthily killing his enemies, but won't stop him from ruining Ryan Fitzpatrick's day.

Bills DE Mark Anderson (Shame of Facing His Old Team as Part of a Terrible Defense) - Out.