The Oracle at Delphi Seattle returns to predict the week's picks, this week's Powerball numbers, and who put the bomp in the bomp-sh-bomp-sh-bomp.

As the last several days have pointed out, in case it wasn't already abundantly clear, there has been no love lost between the fanbases of your Houston Texans and whatever the hell the team from that backwater state is calling itself now. Sunday's game should prove, if things go according to plan, to be highly enjoyable. Rubbing your archrival's nose in your own team's success like a puppy standing in front of a pile of poo is an incredibly gratifying prospect.

Daydreams of steamrolling the hated...whatever they're called...can only be made better one way: with delicious Buffalo Wild Wings. So with the rancor aside (temporarily, of course), let's move on to this week's food pr0n and truly terrible poetry.

This week's sauce will make you feel like you've been on a three week bender in Mexico, except without the hangover, horrifying recollections of what you may or may not have done, and concerns for any missing internal organs you might have. It's got jalapeno with a hint of tequila and lime, it's "Jammin' Jalapeno!" 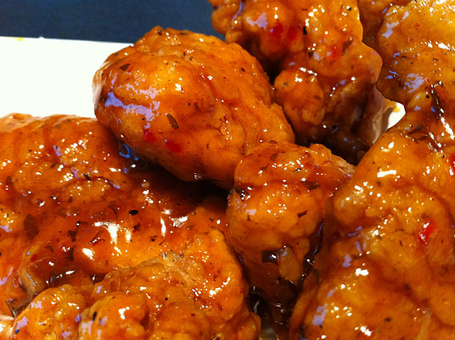 If you want a kick, there's a sauce for that
Strong and flavorful, I could drink a vat
Of Jammin' Jalapeno sauce, I would gladly drown
Add wings to it, and it's time to chow down.

On to the picks!

New Orleans Saints at Atlanta Falcons - In their last matchup, the Saints knocked the Falcons from the ranks of the unbeaten. Since it is my belief that no team in the NFC South can beat its division rival more than once in a season, Atlanta will win this one. Pick: Falcons

San Francisco 49ers at St. Louis Rams - Oh goody, another quarterback controversy, this time on a team that's actually worth television time. Difference is, this isn't really a controversy. It's Colin Kaepernick's job now that he's shown he can run the offense. He should further cement the role with a win over the Rams. Pick: Niners

Houston Texans at (insert state here) BESFs (a.k.a. The Only Game That Matters) - I'm not going to get cute on this one. I want the Texans to clinch, I want it to be against the Traitors, and I want Bud Adams to bust an aneurysm as he watches the Texans hang triple digits on his "team." Pick: Texans

Minnesota Vikings at Green Bay Packers - Minnesota, may I just say welcome back to the pack in the NFC. Do they continue their slide and hit .500 for the season? Against a probably pissed off Packers team? I say they do. Pick: Packers

New England Patriots at Miami Dolphins - Breaking news: The Miami Dolphins have agreed in principle to a new stadium naming rights deal. From this day forth, it shall be known as "Buffalo Wild Wings Stadium." They better hope that happens to them again this week. It's the only chance they have of stopping the Patriots. Pick: Patriots

Seattle Seahawks at Chicago Bears - In one fell swoop, the Seahawks lost both their starting corners to four game suspensions for violating the NFL's performance enhancing drugs policy. To give that some perspective, imagine if the Texans lost Johnathan Joseph and Kareem Jackson for the next four games. Scary thought, ain't it? If they're gone as soon as Sunday, I think Jay Cutler might be able to cut up that pass defense. Pick: Bears

Jacksonville Jaguars at Buffalo Bills - I hereby declare this game the "Four Quarters Hate" game for Texans fans. In the Sparkly Teal corner, fresh from being sent packing by the Eagles in disgrace, weighing in at 267 pounds (58 pounds of which is tattoo), Jason Babin! And in the Blue corner, smelling faintly of bleu cheese and disappointment, weighing in at 292 pounds, Mario Williams! Granted they won't actually be facing each other, but still, I need some excuse to write about this game. Eh, I got nothing left. Buffalo wins because Jacksonville is still terrible. Pick: Bills

Indianapolis Colts at Detroit Lions - Said Ndamukong Suh: "It's a crazy play. It's one that unfortunately happened...I was being dragged to the ground and my foot inadvertently hit the man." Yeah, it also inadvertently stayed in the air a lot longer than the other leg and somehow pulsed in the exact direction of one Matthew Percival Schaub (may not really be his middle name). I totally believe that. Just an innocent victim of circumstance. I expect the Colts to win, but what's more, I hope they stomp the living hell out of the Lions after this. Pick: Colts

Carolina Panthers at Kansas City Chiefs - Oh, poor Kansas City. I remember what it was like to be you: to have the worst record in the league, to wonder just where we are going and what's with the handbasket, to demand better from a front office that you assume has the collective IQ of a household sponge. I remember that, but I'm enjoying it happen to you instead of us for a change. Less sulking for Cam Newton this week. Pick: Panthers

Arizona Cardinals at New York Jets - You find me at a disadvantage. I think I've used up every Mark Sanchez/Tim Tebow joke I have in the arsenal. So here's what I'll do. You write a Tebow/Sanchez joke in the comments and I'll copy the one I like best up here. Unfortunately, I do think they'll win here. Pick: Jets

Tampa Bay Buccaneers at Denver Broncos - This game is fraught with playoff implications. The Broncos could sew up their division with a win, while a win by the Bucs keeps their hopes of an NFC wild card spot alive. But with no Eric Wright in the secondary, Manning could have an easy day against the Bucs. We'll go with the Broncos. Pick: Broncos

Cincinnati Bengals at San Diego Chargers - You know who I blame for the Chargers' abysmal season? It's not Norv Turner, it's not A.J. Smith, it's not Dan Fouts (though I'd like to blame him), or Nate Kaeding or the ghost of Travis Johnson (again, good candidate). No, I blame that picture of mouth-eye Philip Rivers; that somehow had an effect on them. And it'll have an effect on them in this game too. Pick: Bengals

Cleveland Browns at Oakland Raiders - You know something? I have a pretty good imagination, but even I cannot conceive of something as soul-crushingly dreary and depressing as this game. Fortunately for the Raiders, it's likely to be one of the few games they'll actually win the rest of the season. Pick: Raiders

Pittsburgh Steelers at Baltimore Ravens - What I said about NFC South divisional games can also be applied to the AFC North, especially when it comes to these two teams. Whoever wins the first game is likely to lose the second time they face one another. As the Ravens won last time, that means the Steelers should win this one. Or at least I hope they do. God, I feel dirty. Pick: Steelers

Philadelphia Eagles at Arlington Cowfarts - NBC, you have the flex rule. You can pick any game that the other two networks haven't nailed down, and THIS is the game you choose? What, are you sick? Is it really worth putting a crap game on TV just so you can have the mindless drones that comprise the majority of Cowfart fans watching to boost the...wait, nevermind, I already know the answer. Pick: Cowfarts

New York Giants at Washington Redskins - Well, this game doesn't LOOK like the dumpster fire that was the Eagles at home against the Panthers. It doesn't smell like one either. And now with the end of the season looming, the Giants will go into beast mode and make this game interesting, to say nothing of Robert Griffin III. Pick: Giants