You know that (not exactly accurate) idea that the Inuit have hundreds of different words for "snow"? I feel like, as sports fans, we need a similar set of words for "hate." I mean, we throw "hate" around a lot -- or, at least, I do, because that's how I roll -- but there are varying degrees and reasons for the emotion.

There are teams you hate simply because their fans are jagoffs (Steelers) or in need of forced sterilization (Cowboys).

There are teams you hate because of one or two specific players (Broncos) or coaches (Jets).

There are teams you hate only because they consistently do well against your favorite team (Chargers, Manning-led Colts).

While these are all perfectly valid uses of the Great Emotion, they are a limited, specific kind of hate. In a week like this, the difference between that hate and the emotions you feel toward the Tennessee Titans is literally palpable. You may hate the Ravens because they embrace an overrated, murderous linebacker, but you hate the Titans for every conceivable reason and with every fiber of your hate-filled heart.

Or at least you should. Because, seriously, that whole franchise and everything associated with it, from the fans to the state of Tennessee as a whole, deserves your scorn. They are a stolen franchise with the gall to consider Earl Campbell and Ray Childress and Curley Culp to be three of their own historical greats.

They are owned by a man with zero redeeming qualities, save for the fact that he's probably not immortal.

They are cheered for by the kind of unoriginal mouthbreathers who think "Fexans" is a clever and biting nickname.

They exist in a state that birthed the Ku Klux Klan, drove Hank Williams and Keith Whitley to drink themselves to death, and stole money from Vega's dad.

They have employed both Pacman Jones and Kenny Britt, because not breaking the law is totally optional and unimportant.

And they do it all from a city that murdered everything good about country music and replaced it with a shirtless Kenny Chesney ripping off Jimmy Buffett.

What I am saying is, the team, fans, owner, and state deserve to be swallowed up by the earth like something out of Numbers. But either Bud Adams' deal with Satan prevents that, or the earth has too discerning of a palate to swallow up something that certainly tastes like racoon roadkill.

1. Good Effort, Vols. Tennessee was the last state to join the Confederacy during the Civil War, seceding on June 24, 1861. They didn't even make it nine months before Nashville fell to the Union at the end of February 1862. Then, in 1864, the Confederate Army of Tennessee was all, "screw this, we're taking Nashville back!" The Battle of Nashville was not exactly the Battle of San Jacinto; the Confederates got their asses kicked for two days, then ran away. Which is probably why no one has ever said "Remember Fort Donelson!"

2. The Tackle. I emailed former NFL LB Mike Jones to ask him about his Super Bowl-ending tackle on Kevin Dyson. Sadly, I didn't get a response. So I'm going to make one up, because I can. "Oh, yeah, I totally baited McNair into making that throw underneath; they lined up Dyson behind Wycheck, and I pretended to run with Wycheck just long enough to make McNair think he was covered. Then I peeled back and easily finished that play. What a bunch of idiots."

3. Bears Repeating. Hey, remember when Bud Adams got the city of Houston to pony up $67M in 1987 to renovate the Astrodome under threat that he'd move the Oilers to Jacksonville if they did not, only to demand a shiny new stadium less than eight years later? Then remember how, when Mayor Bob Lanier told Adams to pound sand, Adams snuck around and negotiated with the mayor of Nashville? And remember how Adams moved the Oilers to Memphis a year early because he whined to the league that -- shocker! -- the people of Houston weren't real thrilled about coming out to watch a middling Oilers team that was going to leave?

THREE OF THESE STATEMENTS ABOUT NASHVILLE ARE TRUE.

1. A train wreck in 1918 killed 101 people and remains one of the deadliest rail accidents in U.S. history.

2. One of the city's nicknames is "Nashvegas," despite there being no casinos in Nashville, because the people who came up with the nickname apparently had zero concept of what Las Vegas actually is.

3. Neither Hank Williams nor Waylon Jennings were members of the Grand Ole Opry; Williams was fired from the Opry in 1952 and Jennings appeared a few times but refused to perform there after the Opry banned drums.

4. Just before his death, Keith Whitley said the reason he continued to drink alarming amounts was because being sober in Nashville was worse than dying of alcohol poisoning.

"Nashville is a river town with a long and sleazy history. It was a capital of commerce before the Civil War, when it became a vicious war zone and a swollen Mecca for gamblers and prostitutes. The population doubled during the war, and most of the newcomers had syphilis." --Hunter S. Thompson, explaining Nashville's nickname, "The City of 10,000 Whores" 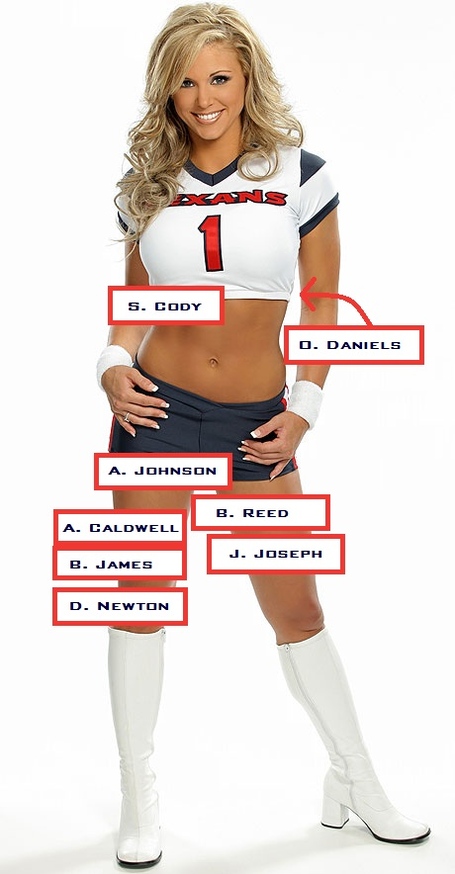 Shaun Cody (Doing Own Stunts On "On The Nose"). Cody is still battling a rib injury and other injuries that I could probably look up but will not because, hey, Shaun Cody.

Owen Daniels (He's Bringing Achy Back). The same back injury that had OD probable against the Lions lingers on. He'll play.

Andre Johnson (Greatness Overload). Dre is battling a slight groin injury, probably from how he forcibly stuck it to the AFC in November.

Brooks Reed (Split Ends). He's going to miss this game and at least a couple more with a groin pull suffered against the Lions. Here's hoping we never play on Thanksgiving (or any Thursday) ever again.

Antoine Caldwell / Bradie James / Derek Newton (Three-Legged Race Mishap). All three have various things wrong with parts of their legs. All three might possibly be addition by subtraction, though, so...yeah.

Johnathan Joseph (Shocked by Kareem's Play). JJo is battlin' a hamstring injury. He's a good kid, and he's out there every day fightin' it.