The Oracle is having a bad week, okay? It happens!

Last week pretty much sucked on a grand scale in the Oracle's world. The picks went sideways, the Texans...well, I'm still not prepared to discuss whatever the hell that was on Monday night, and I'm still waiting for Paul Tagliabue to overturn the restraining order Roger Goodell slapped me with ordering me to stay at least 1,000 yards away from J.J. Watt.

I'm not in my happy place right now, and probably won't be until the Texans redeem themselves against the Colts.

Let's get to some wings. Maybe those will make me feel better. 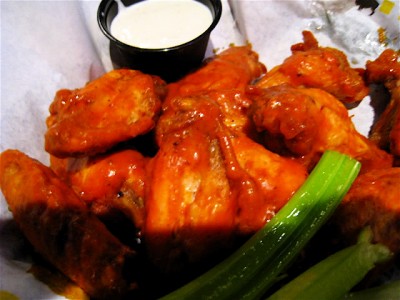 Like candy and barbecue
The taste is so sweet
With flavor like this
Who's missing the heat?

Cincinnati Bengals at Philadelphia Eagles - Like most Thursday night games, I'll try to find some reason to care about this game, come up woefully short, and likely take shots at Michael Vick being a dog killer. Oh, I know why I should care about this game! One of the offensive linemen is a distant relative to my wife. Problem solved! Pick: Bengals

Indianapolis Colts at Houston Texans (a.k.a. The Only Game That Matters) - The AFC South title is there for the taking. The only thing standing in the way are those pesky Colts. Why does this seem oddly familiar? Hopefully last week's game (which we will not speak of) was enough of a wake up call that there'll be nothing left of the Colts at the end, causing the Texans to win the second matchup by default. Pick: Texans

Denver Broncos at Baltimore Ravens - How strange is it to think that just a couple of weeks ago we would have hoped the Broncos just rolled over the Ravens? Now that Denver is only a game behind us, we need the Ravens to knock the Broncos down a peg. I hope the Ravens win, but the way the Broncos are playing, I don't really expect them to. Pick: Broncos

Jacksonville Jaguars at Miami Dolphins - Am I the only one who, when seeing who Jacksonville is lined up against (except Houston of course) in any given week, hears the song "Battle of Who Could Care Less?" But in a battle for the basement, can they out-suck the Kansas City Chiefs? I think they can. I believe in them, and Kubiak believes in them too. Pick: Dolphins

Washington Redskins at Cleveland Browns - I'd be more impressed with the Browns' three game win streak if two of those wins didn't come against Kansas City and Oakland, and the third off a hilarious eight-turnover performance by the Steelers. And with RGIII's status in doubt for the game, facing Kirk Cousins might help extend that streak to four. But I doubt it. Pick: Redskins

Minnesota Vikings at St. Louis Rams - I'm calling it right now, I don't think Adrian Peterson is going to break Eric Dickerson's record. I also don't think that he tops 2,000 yards on the year. He's up against a Rams defense that's ranked 8th in DVOA, the Texans' 4th rated run defense and a middle-of-the road run defense in the Packers. Coming up with 400 yards among that lot seems unlikely to me. If the Rams stop Peterson, the Rams will win the game. Pick: Rams

Tampa Bay Buccaneers at New Orleans Saints - Drew Brees has thrown one touchdown and seven interceptions in the last two games. That's ugly. I mean like circus ugly. Combine that with a desperate Bucs team trying to keep its playoff hopes alive (spoiler alert: they'll fail), and it's not looking good for the Saints this week. Pick: Buccaneers

New York Giants at Atlanta Falcons - It's a shame this game isn't on later, really. This could have been a much better game to watch if it weren't on opposite the Texans. The Giants seem to be back on track after smashing the Saints' playoff hopes to pieces with an extremely large hammer, and the Falcons have the best record in the NFC (somehow). I like the Giants here. They've got the steamroller going. Pick: Giants

Green Bay Packers at Chicago Bears - And people were worried that the Packers would miss out on the playoffs after the "Fail Mary" game. Looks like not only are they going to the playoffs, but might also do so as the NFC North champs. By the way, that game was totally awesome. With the way the Bears are playing, I don't think the Packers lose this one, either. Pick: Packers

Seattle Seahawks at Toronto Bills - I'm probably worrying over very little but...please God, don't let Mario decide he wants to play this week and cause him to hurt Russell Wilson. If he does, I fully expect Red Bryant to eat the Texans-ex defensive end. It's the right thing to do. Pick: Seahawks

Carolina Panthers at San Diego Chargers - I could have sworn that these two teams have played already. Maybe it's because all games the Chargers and Panthers played this season sort of blur together into a single long blue streak of mediocrity. Which is odd considering both won their games just last week, against teams they probably should not have beaten. I'm just going to flip a coin on this one. Or at least tell y'all I will. Pick: Chargers

Detroit Lions at Arizona Cardinals - I don't feel pity when my team is annihilating another team, generally. I reveled when the Texans curbstomped the Titans, the Colts; if my team plays them, then I feel no sadness for whoever is on the losing end of a Texans' rout. Last week's Seahawks/Cardinals game though, after the first 40 points, it was just sad. I mean that was the kind of game that gets people fired. And this week will do Ken Whisenhunt no favors. Pick: Lions

Kansas City Chiefs at Oakland Raiders - Just when I thought there couldn't be a worse game than Kansas City/Cleveland, a new challenger arrives! It seems oddly appropriate that the Raiders play at a place called "The Black Hole." After all, black holes are supposed to suck up everything in its path: light, hope, talent, sanity...but not the local parolees. Go figure. Pick: Chiefs

Pittsburgh Steelers at Arlington Cowfarts - This could be one hell of a game. Not because of either of the teams being good or worthy of attention. Quite the reverse, in fact. No, I mean the epic levels of douchebuffaloes in the stands in the form of Cowfarts fans and bandwagon Steeler fans in one place at one time. And much like in "Star Wars," I firmly hope and expect the Death Star to blow up in an enormous radioactive cloud of smug, smelling faintly of disappointment and unwashed socks. Pick: Steelers

San Francisco 49ers at New England Patriots - Neither conclusion to this game is satisfactory. Either the Pats win and cause additional pressure for the Texans to win out to get the top seed in the AFC, or the Niners win and effectively put the NFC West out of reach for the Seahawks. But this is a Texans blog and the sting of losing to the Pats still rankles. Rankles, I say! Also, I can console myself with an infinite loop of "Douchebag Harbaugh Style." Pick: Niners

New York Jets at East Arkansas BESFs - There are games where you don't want either side to win and there are games where the only acceptable ending would be a neutron bomb detonated at the 50 yard line. Why this and not a hydrogen bomb, you ask? The explosion from the neutron bomb should set off a chain reaction of meth lab fires and...well...you get the idea. I cannot in good conscience pick Tennessee here. Or ever. Pick: Jets

The Oracle has spoken. Now it's your turn. Argue about these picks at your leisure!