Jim Irsay Is An Inveterate Liar

Robert's boy is all grown up. And acting just like his dad.

Share All sharing options for: Jim Irsay Is An Inveterate Liar

Ask an NFL fan to describe Colts owner Jim Irsay, and you will get a wide range of answers, almost none of them flattering.

He's the kind of unaware jackanapes who would unironically put a bunch of guitars on the field at Lucas Oil and then have someone photograph him, in a white tuxedo, alongside those guitars. He's an unfunny douche who turns into a whining twat the second some media hack mocks him on Twitter. He poses for pictures like this, and this, and OHMYGODTHIS. He's the painkiller-abusing son of the raging drunk who stole the Colts from Baltimore in the middle of the night just a few months after promising that the Colts weren't leaving. He's the type of self-important git who would get a police escort from the Four Seasons to FedEx Field just because he can.

In short, to steal a line from Rivers, Irsay is the epitome of someone who was born on third base and thinks he hit a triple.

You see, I follow Irsay on Twitter because . . . actually, I'm not sure. I guess because it's always funny to me when someone thinks people are laughing with them when the world is really just laughing at them. Whatever. The reason isn't important. What is important is that, back on November 1, I was hanging out on Twitter, when something from @JimIrsay caught my eye. (No, it wasn't naked pictures of him, but I can see why you'd wonder.)

I fired back with a response in short order.

Then I waited. Now, I should mention that Irsay generally runs two different kinds of "HEY, EVERYONE LOOK AT ME AND LOVE ME AND GIVE ME YOUR ATTENTION PLEASE BECAUSE I WILL DIE IF I DON'T GET YOUR ATTENTION" contests on Twitter. One, like this one, where the winner is the first person to answer the question correctly, and a second type where he sets a deadline on submissions of correct answers and he (or "Abby") will draw the winner out of a hat. The hat-drawing contests are specified as such.

A while later, I see this: 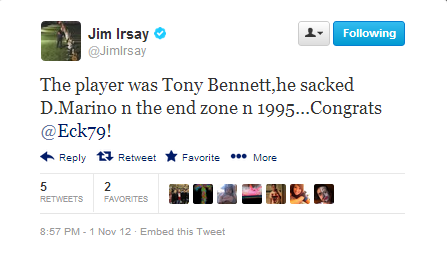 So I check ol' @Eck79's response for a timestamp

Look . . . maybe your method of telling time differs from mine, but, where I grew up, 7:35 happens before 7:36. That seems to be the standard method of measuring such things, right? I pointed this out to Jim Irsay (or whomever actually runs the not-nuttier-than-squirrel-turds portion of his Twitter account), but got no response.

So what gives? My guess is that Irsay checked my Twitter profile and saw that I was a Texans fan, so he just picked the next person. But there's a pretty glaring problem with that answer: it's not how the contest was supposed to work. Nothing in the challenge said that it was only open to Colts fans or that Texans fans were not eligible. Changing the rules on the fly because you don't like how the contest turned out is the kind of bitch move that one would expect from [REDACTED].

There's some irony here, too. I already had tickets to Houston v. Buffalo that weekend, so my plan was to give the tickets to one of the BRB basement dwellers. (I was absolutely going to keep his money, however, because I won the cash fair and square.) So, in picking @eck79, Irsay screwed other Colts fans out of the tickets and screwed me out of the money. Classy move, pal.

It bears mentioning that, by not following the rules here, Irsay didn't just lie to me. He effectively lied to everyone who tried to win that contest. After all, everyone who answered did so with the understanding that, if they were first, they would win. This was clearly not correct.

In the title to this post, I called Irsay an "inveterate liar." This was not an overstatement. Just in the last years, he's lied about the Peyton Manning situation not being about money, and he apparently lied about whether the Colts had reached out to Jeff Fisher about replacing Jim Caldwell. Seen through that lens, that he would lie about the winner of a ticket-giveaway promotion on Twitter seems not only unsurprising, but predictable. His dad would be proud.