Pickin' Winners and Eatin' Wings (Week Sixteen), Or: The Most Wonderful Time Of The Year

Share All sharing options for: Pickin' Winners and Eatin' Wings (Week Sixteen), Or: The Most Wonderful Time Of The Year

This really is my favorite time of year. I can't fully explain why it is, but that doesn't diminish my feelings toward it. Maybe it's because it's a change of pace from the ordinary hustle and bustle of life, or because I find myself less inclined to wish for the imminent destruction of people who annoy me (doubly so if it happens while I'm driving), or even because I find myself grinning like a damn fool when I see a house with lights that sync up with Bob and Doug McKenzie's "12 Days of Christmas." I enjoy it all.

I even like the TV specials that come on. Like many of you, I grew up watching Kareem the Shutdown Corner "Rudolph the Red-Nosed Reindeer," 139 versions of "A Christmas Carol," "How the Grinch Stole Christmas," and "A Charlie Brown Christmas." Every year I make sure I catch them all at least once. As I've gotten older, I've noticed two things.

First of all, absolutely none of these specials have aged well. At all. "Grinch" now looks like an acid trip gone terribly, terribly wrong and "Rudolph's" Claymation is positively antiquated, to say nothing of the blatant sexism about searching for Rudolph being "man's work."

But the other thing I noticed is that "A Charlie Brown Christmas" differs greatly from other Christmas specials/shows because there is no proper resolution to it.

Think of the story behind Rudolph: a reindeer with a weird nose is shunned by his peers and Santa until he returns from defeating the Abominable Snow Monster (Bumble), after which said peers then see the error of their ways and show some kind of contrition to the ochre-schnozzed quadruped.

Christmas Carol: A cheap, mean son of a (REDACTED) learns the error of his ways and atones for his previous bad behavior by being a good man to Crachit, Tiny Tim, etc.

Grinch: He steals Christmas from the Whos and changes his ways when he sees that their missing presents, trees, Hunter S. Thompson-esque riding vehicles don't ruin their Christmas.

The point is this: The jerks in each of these situations change for the better toward those they've wronged. They show some kind of contrition (Rudolph is beloved by other reindeer, Scrooge buys the turkey for Cratchit and saves Tiny Tim, the Grinch gives back Christmas and carves the roast beast).

The other kids in "A Charlie Brown Christmas" are, for lack of a better word, assholes (I can't tell you the number of times I wished for only misery for Lucy for how she acts toward Charlie Brown). They treat him like dirt for all but 45 seconds of the entire show, when for no discernible reason, they all yell "Merry Christmas" at him. There's no contrition, no atonement, just a slight hesitation in their collective hostility toward him at the last possible second. I could understand and maybe even accept it if it were a stand-alone thing, but in later shows/comics, they go back to crapping on him at every turn. It's a crappy resolution, but I still enjoy watching it; which probably says more about me than anything else.

Okay, I've spent enough time blathering about this. Let's look at some wings, shall we?

This week's sauce hails from East Asia, has a sweet and tangy flavor to it and so salty that it would make a sailor proud. No, I don't know what that means either, but I'll pretend I do so we can move on. This week's sauce is: Teriyaki! 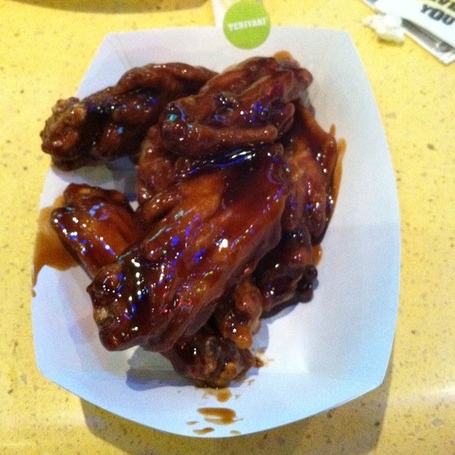 Mirin, sugar, and lots of soy
Wings that taste like this are a joy
This is for you if you don't like heat
This shiny, tasty and sweet-flavored meat

Atlanta Falcons at Detroit Lions - With a win, the Falcons can clinch home field advantage throughout the NFC playoffs. Whether they'll actually DO anything with that kind of advantage is very much up in the air. Detroit hopes to be a spoiler for the Falcons, but screw the Lions and Ndamukong Suh. Pick: Falcons

Minnesota Vikings at Houston Texans (a.k.a. The Only Game That Matters) - One game. That's all the Texans need to win to clinch home field throughout the playoffs. If they can stop Adrian Peterson, or at least prevent him from running roughshod over the Texans, then home field becomes a lot easier to attain. But the Vikings are actually fighting for a playoff spot too. I don't expect the Texans to lose, but I don't think it'll be a cakewalk either. Pick: Texans

St. Louis Rams at Tampa Bay Buccaneers - The Rams actually have an outside chance of making the playoffs. I mean, a lot would have to go wrong for a lot of teams for it to happen, but weird stuff happens a lot in the NFL. Not that that will be the case here, but the Bucs won't do much to get in the way of any aspirations the Rams might have, no matter how deluded they are. Pick: Rams

Washington Redskins at Philadelphia Eagles - Like the Steelers/Bengals game, this one will go a long way to determine the winner of a very muddled, very murky NFC East division title. Unlike that game, however, one of these teams has absolutely no chance of making the playoffs. It's going to be a long, long road back for the Eagles, I think. At least this game will help them get a better draft pick. Pick: Redskins

New Orleans Saints at Arlington Cowfarts - Dear Santa, for Christmas this year, I would like to see the Cowfarts humiliated at home against a Saints team that has had really awful luck this year. They're not going to the playoff. They should at least get something other than coal and additional fines from Roger Goodell in their stockings. Thanks, Santa Durga! Yours, UT Pick: Saints

Indianapolis Colts at Kansas City Chiefs - Well, crap. Even when rebuilding, the Colts still get to go to the playoffs. They haven't clinched a wild card berth yet, but let's be honest here, they're playing the Chiefs. It might as well be another bye week. Pick: Colts

New England Patriots at Jacksonville Jaguars - Chad Henne is a Gabbert by any other name and stinks about as badly. Since beating Tennessee (thanks for that, by the way), Henne has averaged 202 yards passing and registered one touchdown and three interceptions. Jags' head coach Mike Mularkey said that if Henne did well in the last four weeks of the season, he'd be the starter next year. Well...he may end up starting anyway. Nobody else would notice if there was a switch one way or the other. Pick: Fightin' Bradys (Patriots)

Cincinnati Bengals at Pittsburgh Steelers - This game will go a long way toward who gets the other wild card spot in the AFC. If the Bengals win, that would effectively eliminate the Steelers from the playoffs (assuming the Colts win). If the Steelers get the refs in their pocket like usual and have every call go their way win, the Steelers will have the last wild card spot due to a better head-to-head record against the Bengals. I beseech you, Pride of Katy, if you have a shred of decency within you, you will not let the Steelers into the playoffs. That's the last thing the world needs. Pick: Bengals

Buffalo Bills at Miami Dolphins - So it's coming out that the Bills don't like playing in Toronto. It makes sense. I'm pretty sure that Toronto doesn't want their stench polluting their fair city either, or for it to affect their championship CFL team. This is the game that gets Chan Gailey fired. The Oracle has predicted it! Pick: Dolphins

San Diego Chargers at New York Jets - Speaking of the CFL, how about the fact that neither Mark Sanchez nor Tim Tebow will be starting Sunday's game against the Chargers? I suspect Woody Johnson is going to be very unhappy with his ringmaster if Tebow has no purpose on the Jets. Then again, he really hasn't had any purpose on the Jets so far, so what else is new? The only thing that would be funnier is if Greg McElroy somehow led the Jets to a win. But, c'mon, it's the Jets we're talking about here. Pick: Chargers

Oakland Raiders at Carolina Panthers - I can't even bring myself to care about this game. I mean when your best player is a kicker and the other team's quarterback is at risk of losing his spot to an eight-year old, why even make the effort to hype up the game? I can't think of a reason, only of reasons to mock them. Pick: Panthers

East Arkansas BESFs at Green Bay Packers - So after beating the Jets in a game that neither side really wanted to win (and most of us had a good hearty laugh at), do Titans fans really think the BESFs have a chance in Green Bay? Hah! It'll be a cold day in Methlehem before that happens. Pick: Packers

Cleveland Browns at Denver Broncos - The Broncos need to lose this game. I mean seriously, it would go a long way toward lowering my blood pressure if they did. I would say the Browns win this game simply because I have that kind of power to force it to be so. But I don't, and the Oracle is not a moron. The Broncos should win this one and get a first round bye. But they will not achieve home field advantage throughout the playoffs. The Oracle commands it! Pick: Broncos

Chicago Bears at Arizona Cardinals - If anything was going to cause the end of the world, this game would probably be high on the list. That much suck in one place is bound to cause a black hole, or so you would expect. Maybe the Mayans were a couple of days off? Or maybe the whole end of the world stuff was just another apocalyptic prediction fated to be utter crap. Probably the later. The Bears should win this one...somehow. Pick: Bears

New York Giants at Baltimore Ravens - Boy, switching out offensive coordinators really paid off for Baltimore, didn't it? Is it possible that maybe Cam Cameron wasn't the problem there, or at least not entirely the problem? I don't know. I don't care enough about the Ravens to make that kind of judgment. All I know is that they're pretty much stuck with the fourth seed in the AFC playoffs. The Giants have a lot more riding on this game and I expect them to play like it. Pick: Giants

San Francisco 49ers at Seattle Seahawks - In theory, the Seahawks could still win the NFC West away from the Niners. While I doubt that happens (San Francisco faces a cupcake in Arizona next week), I would love to see it happen. Not because I happen to like the Seahawks, but just to see the look on Jim Harbaugh's face when it happens. As for this game, this is not the same Seahawks team that the Niners faced only a few weeks ago. Wilson is far more comfortable in this offense now, and the defense is playing just filthy good. Also, the 12th Man (quiet, Aggie fans) will make life really, really interesting for Colin Kaepernick. Pick: Seahawks

The Oracle has spoken!

And as the Oracle might not be around very much over the next couple of days, I'd just like to wish all of y'all a very merry Christmas/Hanukkah/Kwanzaa/Festivus/Saturnalia and that Santa gives the Texans home field advantage throughout the playoffs for being so good this year.