2DH: Lemonade Was A Popular Drink And Still Is

The Two-Day Hangover returns and drops some knowledge all over everyone.

Share All sharing options for: 2DH: Lemonade Was A Popular Drink And Still Is

UPDATE: According to the Texans' Twitter feed, J.J. Watt has been credited with a sack from the play discussed below. Color me shocked, but pleased. Now, if you'll excuse me, I'm going to spread the rumor that the NFL reached this decision because they read the 2DH.

One of the most basic canons of statutory interpretation is that a court will not construe a vague statute in a manner that leads to an absurd result. So, if one reading of a statute would create a bizarre outcome, while another reading would not, the court will assume that the legislature was not shooting for the crazy version. (Whether assuming rationality among an elected legislature is misguided is a different topic for a different blog.)

I was reminded of this when I heard that what appeared to be J.J. Watt's second sack of the day against the Titans was, in fact, credited as a "team sack" instead.

You see, the NFL's Guide for Statisticians explains:

Credit a sack to the appropriate defensive player whenever a sack is scored against the offensive team, subject to the following principles:

On the face of it, the rule makes sense. If a QB simply fumbles the ball and falls on it without some action by a defender causing the fumble, awarding a sack to the first player who happens to touch the QB is a little off-base. It was still a sack, as defined for the offense, but it wasn't really a sack that should be awarded to any one defensive player in that scenario.

Watt's would-be sack of Locker, however, was NOT that scenario, at least not beyond the most understated recounting of the facts imaginable. Let's go to the videotape! 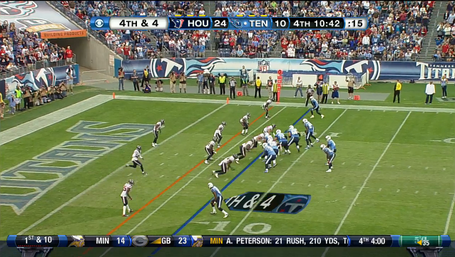 Right at the snap, Locker is in the shotgun and Watt is lined up at the 2-technique DT over the right guard, whose name I don't care enough about to look up. The play is a designed roll-out to Locker's right, with Chris Johnson picking up any backside pass rush. Which is funny to contemplate, but whatever. 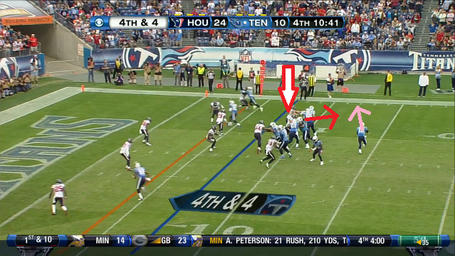 Watt engages the guard head-on, and the center provides the double-team, preventing Watt from cutting back inside. Why they double-teamed him in the direction their QB was going to run probably says a lot about how much they hate Jake Locker. Watt makes a quick move and gets leverage to the outside of the guard, giving him a clear path to Locker's preferred path. 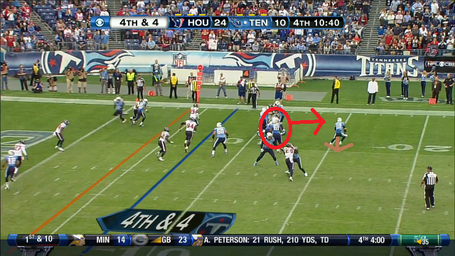 The center has released the double team and looked for a second-level rusher to pick up, because, hey, why bother stopping the most dominant defensive player in the NFL if you can put a delayed block on Darryl Sharpton, right? Though this angle doesn't show it particularly well, Watt has completely beaten the guard at this point and is making a beeline for Locker. Locker sees this and, because self-preservation is a strong instinct, he immediately poops himself (illustrated by the brown arrow) and tries to reverse course. Had he instead just run out of bounds away from Watt, this would have counted as a sack. 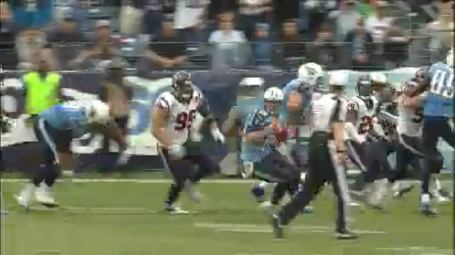 This is a better angle of what Locker was seeing around the time of the previous picture. Even in non-HD, you can see the fear on his face. Also, what the guard is doing there? That's not the most effective blocking technique. 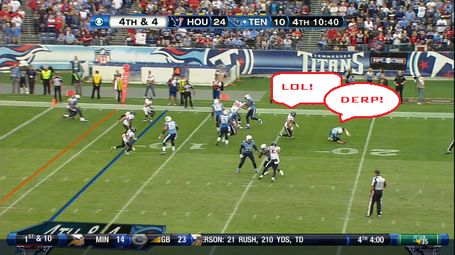 As Edward Smith struggles to get the boat swung around, he slips to the ground, still in possession of the ball when his knee and elbow hit. He only fumbled the ball as he tried to scramble to his feet, and, if he stays down here and Watt touches him, that would count as a sack. Instead, he thinks to himself, "Surely I am agile and fast enough to regain my footing, accelerate away from J.J. Watt, and get a pass off to someone!" (Spoiler alert: He is wrong.) 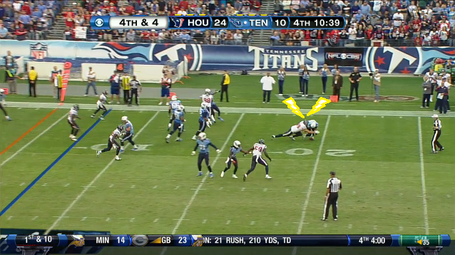 This is literally the next frame that I could get. J.J. Watt moves so quickly, I could not get an HD pic between the last one and this one. He has laid out and made back-of-a-Volkswagen contact with Locker. At the moment of contact, Locker has not fully regained control of the ball, and Watt's impact sends the ball away from Jake's sad hands. 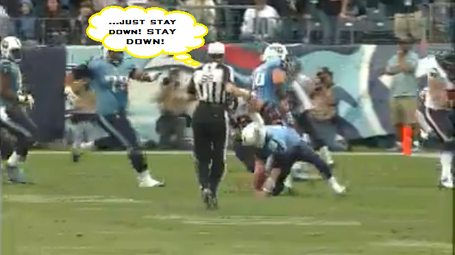 And here's a reverse angle just before contact is made.

So, yeah, if you look at the play devoid of context, Locker "fumble[d] before contact by the defense." But c'mon. I highly doubt that the rule as it was written was intended to prevent a player from getting credit for a sack when his pressure from the moment the ball was snapped caused a pants-shittingly scared QB to try to do a 180, only to fall and lose the ball when he hit the turf. Jake Locker may have fumbled before contact by the defense, but he also fumbled solely because of the imminent destruction posed to him by a member of the defense; when that same defensive player then crushed him a split second later, I simply don't see how you can not call that a sack.

Do the right thing, NFL. Put some brothers on the wall. Give J.J. his sack.

Turnovers forced by the Houston Texans' defense on Sunday, the highest single-game total for a Texans team ever. The previous high was 5, which the team had notched five times (Pittsburgh - 2002, Jacksonville - 2003, Oakland - 2004, Oakland - 2006, and Cleveland - 2008). They'd also managed four turnovers eight times, including twice this season.

Texans' turnover differential in 2012. They finished 2011 with a differential of +7, which was a single-season best for the team. They've had one season with a 0 differential, three with positive differentials (2012, 2011, and +5 in 2004) and seven with a negative outcome (including an atrocious -13 in 2007, which, coincidentally, featured a six-turnover game in the other direction against the Titans).

I have no idea how I managed to overlook this for so long, but Shea Serrano (aka Liston) and Bun B have teamed up to create a fantastically fantastic rap coloring book. They've even been mentioned in NY Magazine. Check it out, people.

Plays in 2012 that ended with J.J. Watt holding the opponent to zero or negative yards. (I didn't count the three half sacks in this total, since those weren't plays that he ended by himself, though he totally could have. He was just being nice and sharing the success with his teammates.)

To quote TexansDC, "How anyone could think the DPOY award is still up for grabs is insane."

In case you were itching for a fun comparison right here, I'll hook you up: Chris Johnson has 46 total TDs in 75 games.

Number of total TDs Arian Foster needs in 2012 to reach 19 and set a new single-season TD record for the Texans.

Rushing yards needed by Arian Foster to hit 4,500 for his career.

Total yards from scrimmage needed by Arian Foster to his 6,000 for his career.

Days, as of this writing, since Jim Irsay lied to me.

Days, as of this writing, until I elaborate on why Jim Irsay is a liar. 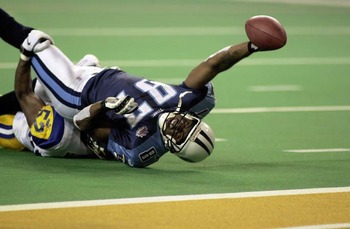 Receiving yards needed by Andre Johnson in 2012 to set a new single-season high for himself and for the franchise. The record currently sits at 1,575 (set in 2008).

Number of Top-10 single-season receiving yardage totals that Andre Johnson holds in Texans history, including spots 1 through 7 and spot 10.

Receiving yards needed by Andre Johnson to reach 11,000 for his career.

Points needed by Shayne Graham to set the single-season scoring record for the Houston Texans, currently 135 by Neil Rackers in 2011.

File Under "No Coach Has Huevos That Grande."

So, watching the Thanksgiving game, my son had an interesting question about the new overtime rules: if the team who was kicking off first kicked and recovered an onside kick, would they win with just a field goal? Or would the other team still get to possess the ball?

Recently, I read . . . somewhere . . . a columnist wondering what would happen if the team receiving the opening kick in overtime managed to eat the entire OT period and kick a FG at the end of the first 15 minutes.

The answer? The game would be over. Rule 16-1-4(a) states that there can be only one overtime period in the preseason or regular season, "...even if the second team has not had an opportunity to possess the ball or if its initial possession has not ended." So, way to be lazy and not look up the answer, sportswriter who I can't recall at the moment. CONSIDER YOURSELF PROPERLY CHASTENED!

The More You Know...

Seth Payne breaks down the 4th-and-1 play. The part about the linebackers' reaction to Casey's motion is pretty awesome and easily missed when you're watching a play like that live.

This Warms The Cockles Of My Cold, Cold Heart.

[Author's note: It's a sad day in Two-Day Hangover Land. It seems that Marijuana Pepsi Sawyer has gotten married and changed the name on her public profile to the much more professional sounding, "Marijuana Sawyer-Clardy." Dang. Thankfully, we have a long memory around here, at least when it comes to stuff like this, so we'll just forge ahead and pretend like nothing has changed.]

Much like the decision to name your daughter "Marijuana Pepsi," Darius Reynaud's decision to call for a fair catch at his own five-yard line was baffling. It was such a terrible decision, it actually made Keshawn Martin's decision to field a punt over his shoulder while running away from the play seem slightly less dumb. Slightly.

One of the best parts of BBQ in America is the regional differences. Yet, sadly, many people are wholly unfamiliar with these regional styles. This season, the 2DH is going to feature a different BBQ region and a recipe from that region. This week: Arkansas.

I just lied to you. Sorry about that. This isn't about Arkansas as a regional BBQ style; it's about a kind of sauce that you can find, with slight variations, from Little Rock to Memphis. It's tangy, thin, spicy, and sweet, all at the same time. While there is certainly a lot of mustard involved, it's nothing like a South Carolina mustard sauce. While there's a lot of brown sugar in there, it's nothing like a sweet Kansas City sauce. It's similar in a lot of ways to my rib glaze recipe, but it's nowhere near as thick or sticky.

Originally, I was going to write this post about the version of this sauce that you find at Craig's BBQ in DeValls Bluff, AR, but I haven't been able to find or concoct a recipe that does that one justice. (Seriously, though . . . if you are ever travelling on 1-40 between Memphis and Little Rock, take the time to go to DeValls Bluff and eat a chopped beef sandwich with Craig's hot sauce.)

Combine everything in a pot and simmer for 15 minutes. It should just coat the back of a spoon in terms of thickness, so you might need to add a little water if it is too thick.

Variations: You can increase the hot sauce as much as you want to make it hotter. As written, this is a medium-spicy sauce. Also, you might experiment with lemon juice as an ingredient. I'm pretty sure that's what is in Craig's, but darned if I can get it right.

Put a bunch more stickers on my Trapper Keeper for J.J. Watt. <3

It's shit like "team sack" that will render Watt to be Cabrera'd on DPOY though. Grrrrr.

Mrs. MDC (upon overhearing a neighbor freaking out about the Texas-KSU game):

Dude up the street just had a full-on football meltdown. Made me think my life might be somewhat normal.