Pickin' Winners and Eatin' Wings (Week Fourteen), Or: More Than A Pick

This week, the Oracle explains why Tom Brady is an idiot, the potential positive uses for the song "Oppa Gangnam Style," and makes a few picks here and there...kind of like Drew Brees on Thursday, but in a good way.

Share All sharing options for: Pickin' Winners and Eatin' Wings (Week Fourteen), Or: More Than A Pick

It occurs to me that last week I said the picks were for Week 12. Having looked over the schedule and discovered that this is, in point of fact, Week 14, I had a variety of excuses I could make.

I could have said that I was exhausted after two Texans OT games and kind of threw stuff together at the last minute; but I do that every week, so that wasn't going to fly. I could have said that the lack of concentration was symbolic of my complete and utter contempt for the BE-SFs, only to realize that it's hard to imbue meth fumes into a blog post, so that was out. I could have even said that I did it because I'm incredibly superstitious and didn't want to use the number 13 in the post.

Nope. I just wasn't paying attention, and that's not good hustle on my part. But I'll battle past the mistake and move on like it didn't happen (which I assume is how Frank Bush gets through life).

Ode to a Sauce

This week's sauce is both sweet and hot at the same time; kind of like me, except for the hot part. And maybe the sweet. So really, it's nothing like me at all. This week's sauce is (if you haven't caught it by looking at the picture earlier) Mango Habanero! 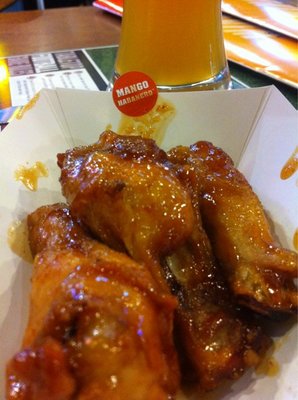 Hey mango! Mango Habanero
Flavor that make me wanna mambo
But if you order, make sure you have a beer
'Cause soon it's gonna get mighty hot in here

Denver Broncos at Oakland Raiders - Much like the rest of the Raiders' season, this game is going to be a pride-obliterating butt kicking. It will be a rout, it will be decisive, and there will be nothing that the Raiders can do about it. Pick: Broncos

Chicago Bears at Minnesota Vikings - Against this defense, I don't think Adrian Peterson will get the yardage that it'll take to compete with the Bears. Combine that with the Bears' offense and this game should go one way: da Bears' way. Pick: Bears

New York Jets at Jacksonville Jaguars - Which of these things is funnier: Mark Sanchez benched for a second-year quarterback , that said second-year quarterback led the Jets to a win over the hapless Cardinals in the most mediocre way possible, or that Sanchez will be the starter again this week? The correct answer is, of course, all three. But they're still better than the Jaguars. Pick: Jets

East Arkansas BESFs at Indianapolis Colts - I believe this is what's called a dilemma: a decision where there neither choice is a good one. If I want the Colts to lose, that means--I can't even write it. But a Colts win would mean that the Texans couldn't at least theoretically clinch home field advantage through the playoffs. Aw screw it, I'm going with the only morally acceptable choice here. Pick: Colts

Arlington Cowfarts at Cincinnati Bengals - Dilemma 2: Do I pick the Cowfarts in the faint hope that the Texans clinch home field next week? Or do I go with my gut and pick the team that should win? I think I know the answer to that; with any luck, maybe that'll put an end to the Cowfarts' playoff hopes. Pick: Bengals

San Diego Chargers at Pittsburgh Steelers - LOLOLOLOLOLOLOL Chargers. I have nothing else to add here. Pick: Steelers

St. Louis Rams at Buffalo Bills - I don't know how the Rams managed to beat the Niners last week, but I don't think they have the same luck against the Bills. Don't know why exactly really, but I think Buffalo's offense might be a bit more than the Rams can contend with. Pick: Bills

Kansas City Chiefs at Cleveland Browns - When it comes to the whole Jovan Belcher story, I think I feel the worst for his three-month-old daughter. She'll have to go through the rest of her life without either parent there to support her. But there is a silver lining to this story, if you can call it that: The NFL has announced that Zoey (the daughter) will receive $108,000 a year, plus $48,000 when she turns 5 and $52,000 a year until she turns either 18 or 23 (depending on college). No smartassery here. I'm taking the Chiefs. Pick: Chiefs

Philadelphia Eagles at Tampa Bay Buccaneers - So you couldn't even beat the Cowfarts, huh, Eagles? Okay, fine. I'll give you one chance to atone, and you WILL atone! And you will do this by beating the Buccaneers. C'mon, for old times' sake! Not that I actually believe this will happen, mind you. Pick: Buccaneers

Baltimore Ravens at Washington Redskins - This goes right along with the Astros and Rangers under the category "Teams That Should Be Rivals But Just Aren't." And if it weren't for the fact that they only play each other once every four years, that the Redskins haven't been good since the Ravens have existed, and that both teams have more "compelling" rivals, they might very well be. But they're not. And just like this is a mismatched rivalry, it's a mismatched game too. Ravens win easily. Pick: Ravens

Atlanta Falcons at Carolina Panthers - The NFC South is no longer up for grabs (not that it really was for most of the year), so there's no reason for Carolina to really care about this game one way or the other, save for one reason: to play spoiler to the Falcons' hopes for home field advantage through the playoffs. Even so, I don't think the Panthers have it in them to stop the Falcons. Pick: Falcons

Miami Dolphins at San Francisco 49ers - Wow, so much for Colin Kaepernick being the second coming of...um...I don't know. I really can't focus on the game. I'm too busy listening to this song about Niners coach Jim Harbaugh. I have to stop listening to it...but I can't, because it's just too true. Oh, right, the game. Niners will win. Pick: Niners

New Orleans Saints at New York Giants - Wow, that was one hell of an ugly game by Drew Brees on Thursday night. I don't recall ever having seen him play as crappy as that. If the Saints are going to have any chance of making the playoffs (yeah, right), Brees will have to right things against the leaders of the NFC East. Not that they're terribly impressive either, but someone has to win that division. And someone has to win this game. And it'll probably be the Giants. Pick: Giants

Arizona Cardinals at Seattle Seahawks - Andrew Luck and Robert Griffin III get all the headlines, but Seahawks QB Russell Wilson is quietly having a damn good season of his own. In his last four games alone, he's piled up almost 900 yards passing, thrown for nine TDs, 0 interceptions and achieved a quarterback rating of 120.4. The kid is good, and he's going to be in the Emerald City for a looooong time. What does this have to do with anything, you might ask? Only this: he's even better at home, and he's going to want payback against the Cards. Pick: Seahawks

Detroit Lions at Green Bay Packers - Remember last week when I said that whoever wins the first matchup in a division game usually loses the second? That goes out the window in this case. The Lions are in freefall and the Packers just eclipsed the Bears for the lead in the NFC North. It can only end in tears for the Lions, and I couldn't be happier about it. Pick: Packers

Houston Texans at New England Patriots (a.k.a. The Only Game That Matters) - I'm going to pick the Texans to win. Not necessarily because the Texans are the better team (although they are), but because I firmly believe that Tom Brady is an idiot. Why? Here's why. Anyone who breaks up with someone like her needs his friggin' head examined is all I'm going to say. I shouldn't need any better reason than that. So I won't give one and pick the Texans anyway. Pick: Texans