I'm half sure Rick Smith is the smartest man in the world. It's Rookie Review time again.

It was a great week to be a rookie for the Texans. Brice McCain left the game with an injury (and promptly went to a burn ward) giving way to Brandon Harris. Harris, the second year 2nd round pick out of Miami, has been cited as having a lack of downfield speed and hasn't seen the field as much as one would expect from such a high draft pick, but I can say with confidence that after watching the tape his speed was anything but lacking. I was very, very impressed by Harris’ play and graded him out as the second best DB on the field in Week 13 behind only the suddenly stellar Kareem Jackson. Harris gave up four catches on the day for a total of 78 yards, but 66 of those yards came on two insane grabs by Kendall Wright and Nate Washington in which Harris had perfect coverage (seen below). I can’t really fault him for the receiver making a great play and the quarterback making an Aaron Rodgers-esque throw. It just happens sometimes. For the rest of the game, Harris was lights out. I was particularly impressed with his closing speed and open field tackling ability; when a receiver would sit down underneath his zone, his hips were perfect for the most part when it came to reading a go route, turning, and going to a track meet. I can’t say enough how proud I am of how solid a show this young Bull put on last Sunday. 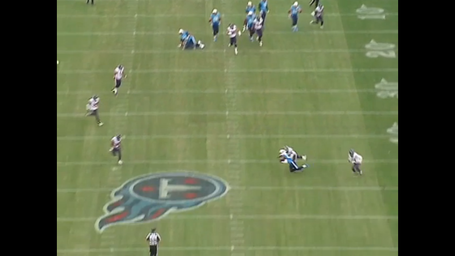 Meanwhile, Keshawn Martin had his usual day of Matt Schaub not trusting him to catch the ball (and seemingly refusing to throw it to him) when he repeatedly gets open 40 yards down the field because he misses every single 5 yard slant thrown in his direction. How could somebody who is so fast, so good at route running, and so dangerous in the open field be so infuriatingly inept at catching the easiest possible pass in the route tree? It’s maddening! Ugh…anyway, moving on.

Lestar Jean lived up to his "big play" moniker and made a big play – a 54 yard touchdown grab, to be exact. Whitney Mercilus made his first start of the year and it turned out to be quite a debut. Two sacks and a fumble recovery – I’ll take it. Ben Jones was solid, but continued his recent trend of having issues against big, physical DTs. He can handle bull rushers like Ndamukong Suh and Carl Klug a lot of the time, but not all of the time. It’s not like his little slip-ups against the man-beasts of the NFL happen often, and none of them have really resulted in anything more than Matt Schaub having to move out of the pocket a couple of times, but I do acknowledge that he needs to get better as a "phone booth boxer" and anchor against bull rushing defensive linemen with more consistency. Where Jones shined this weekend, as he always has, is run blocking in space. If there is one thing that he can do better than most people, it’s pull across the back side of a tackle and blow up an outside linebacker on the second level. Ben Jones looks like he was made for this offense.

Despite all of these success stories from last weekend, however, one rookie stood above all others – Brandon Brooks. This 6’5" 340 lb. behemoth only played 15 snaps in rotation with Ben Jones, but wow what a 15 snaps they were. If you thought I ogled Jones a bit too much when he made his debut earlier this season, you should have seen the puddle of drool on my desk while I watched Brooks. I haven’t seen this kind of athleticism, this kind of power, this kind of speed in a man this size since...well…ever. He still has some technical refinement to go through if he wants to be a great guard in the NFL, but much like Duane Brown before him, the physical tools are there. I only graded one of his 15 snaps "negatively," where he let Carl Klug get his left hand free for an arm tackle of Justin Forsett, and even then, it still went for positive yardage. He really is a physical specimen, and if he continues to improve his technique to catch up with his athleticism, it is very possible that Rick Smith may have found two future stud guards within two rounds of each other – not bad. On to the tape.

Houston is lined up in a one back, two tight end set. Tennessee counters by stacking two linebackers over two down linemen on the strong side to try to stop the inevitable run. Brooks is circled at right guard. 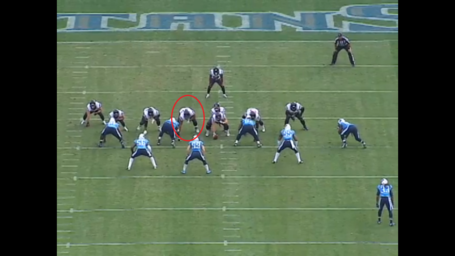 The ball is snapped, and Brooks takes on the defensive tackle. Harris moves to double team the defensive end while Chris Myers prepares to block the outside linebacker on the second level. Wade Smith takes the other defensive tackle while Duane Brown comes to seal a cutback lane against the other outside linebacker. Brooks gets very low and stops any penetration from a churning Jurrell Casey, which isn’t exactly an easy task. While almost every other guard on the Texans roster has struggled with anyone over 300 lbs. this season, Brooks does not. I suppose also being in the 300 club himself helps a little bit. 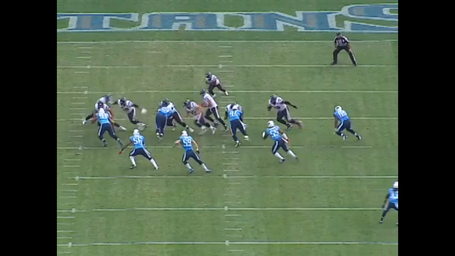 Brooks wins the clash at the line and starts to plant Casey in the grass. If Forsett wants a lane, that is the easiest way he’s going to get it. 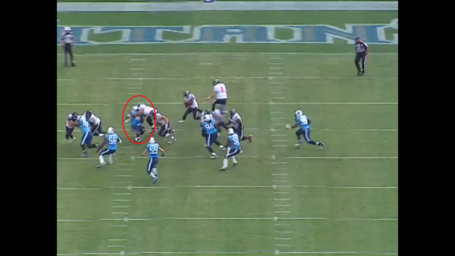 Owen Daniels and Harris sustain their double team against the defensive end. Brooks pancakes Casey. Myers continues on his collision course towards the linebacker while Smith and Brown continue blocking on the backside cutback lane. Drawn in yellow is Forsett’s wide open lane behind Myers and directly in front of the now grounded Jurrell Casey. 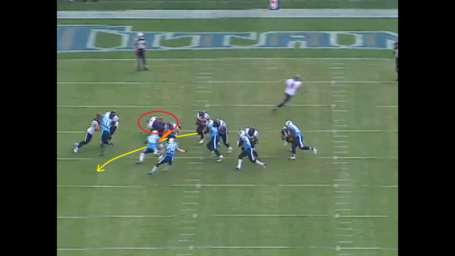 Unfortunately, Forsett decides to cut back behind Wade Smith’s block instead. 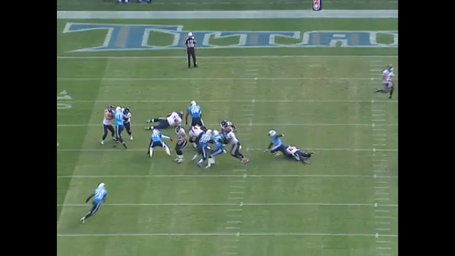 Despite Brown’s best efforts to seal off two linebackers at once, Forsett is tackled for no gain. A perfect pancake from Brooks is wasted. 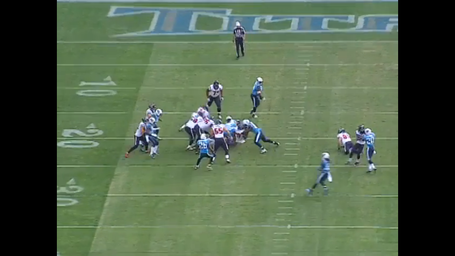 I took this from the broadcast view of the gutsy 4th and 1 conversion from the first quarter because I wanted to illustrate Brooks’ superb burst off the snap. It was hard to highlight the jump he was able to consistently get on every snap from the pixelated All-22 cam, so this shot will have to do. Brooks is circled in red at right guard. 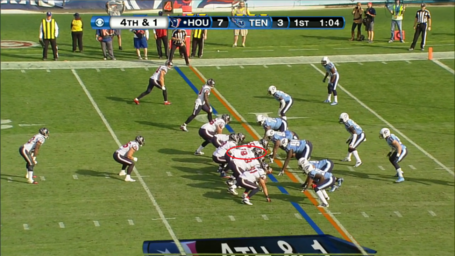 Brooks is coming out of his stance barely a millisecond after the ball is snapped. The only other offensive linemen that are moving are Myers and Andrew Gardner (great jump from Gardner as well, I should say), and only one player in the entire Titans front seven is moving at this point. He beat nearly everybody on the field off the snap, and in the NFL that matters more than almost anything else. 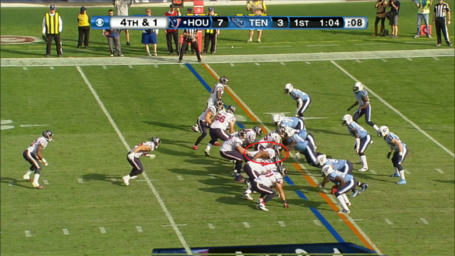 Ryan Harris somehow tripped himself, but Brooks stayed low, powerful, and balanced against Carl Klug and stonewalled him at the line. Perfect execution on a 4th and 1 play that ended up gaining six yards. 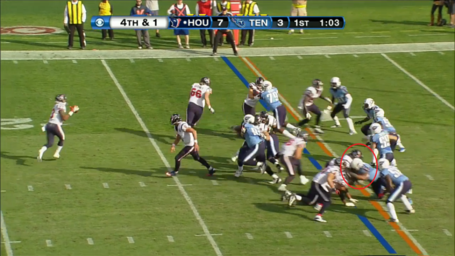 Houston is lined up in an "Ace" formation with Owen Daniels lined up next to Ryan Harris and James Casey next to Duane Brown. Tennessee responds with a balanced line and two linebackers covering the exposed gaps. Kamerion Wimbley is playing one of those linebacker positions while Jarius Wynn plays defensive end. 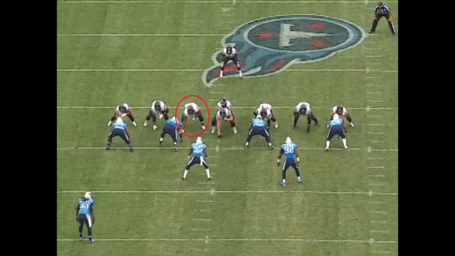 The ball is snapped, and it’s a zone stretch to the weak (left) side. Brooks bursts towards the second level and leaves Harris to cut block Jurrell Casey behind him while Owen Daniels cuts Derrick Morgan. Wade Smith engages the other defensive tackle, Sen’Derrick Marks, with help from a chip from Myers. Brown and Casey engage Wynn on the weak side. 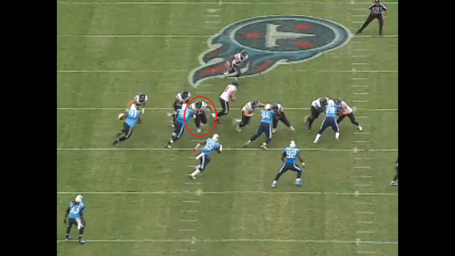 Each orange line shows a connecting one-on-one block as they are assigned on this play. Daniels successfully cuts Morgan, but Harris misses Jurrell Casey. Smith passes the defensive tackle to Myers while he moves up to take the linebacker. Johnson sets up a downfield block on the cornerback. Brown continues to push Wynn outside before setting up a second level block on Wimbley. Brooks’ job is to outrun the safety’s pursuit angle and beat him to Foster’s lane, highlighted in yellow. This isn't something just any lineman can do, let alone a 340 lb. lineman. 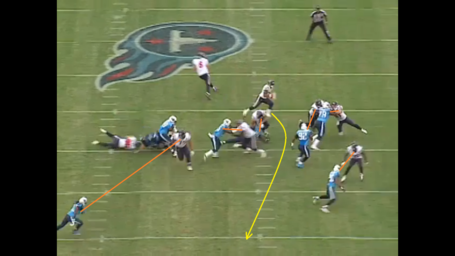 Jurrell Casey is still up and pursuing. Smith holds his block. Myers pancakes Marks. Brown, James Casey, and Johnson’s blocks are all set up, but Foster waits far too long to cut back. He’s risking the narrow window that is open for him by trying to test the edge run. Brooks closes incredibly fast on the safety and forces him to shallow out his angle. 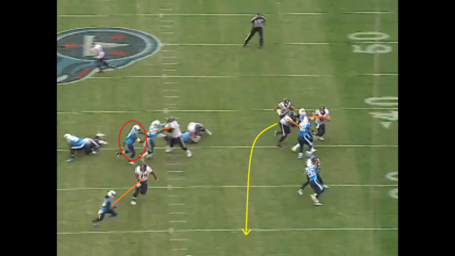 Brooks catches the safety, but it is all for naught as Foster’s decision to not cut back when he had the opportunity threw off the blocking scheme. Casey disengaged instead of Brown in order seal the outside against the safety rather than sticking to the defensive end. Brown stayed on the defensive end instead of engaging Wimbley. 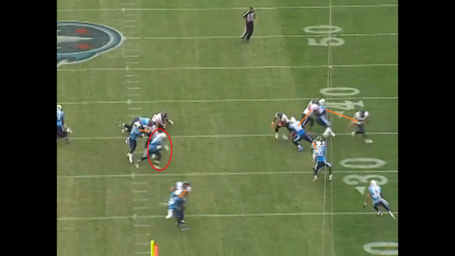 By the time Foster did cut back inside, his blocks already changed to set up an outside run, so Wimbley was free to tackle him for a little to no gain. What I really wanted to highlight this play for was this: I clocked the time it took Brooks to get from slipping underneath Jurrell Casey, sprint 15 yards, and block the safety – 1.9 seconds.

I checked it four times and got that result every time. That’s almost inhuman for a man that size. Heck, that’s almost as fast as a receiver; and for a guard that shouldn't be physically possible. Nobody should be able to be that quick off the line, that strong at the point of attack, and that fast to the point of being able to outrun a safety. How this man did not get invited to the Combine baffles me. He’s practically defying the laws of nature, and if he develops the technical nuances it takes to handle the finesse and speed rushers of the league, there is no reason why Brandon Brooks can’t eventually be a dominant lineman in the NFL. Third round pick well spent, Mr. Smith 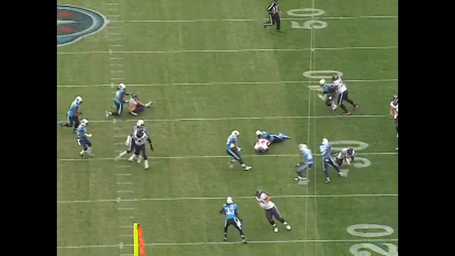 I really do wish I could show every delicious snap from all of our rookies, but alas I’m not sure my fingers would survive typing that many words. Suffice to say that the Texans draft class of 2012 is in full ‘whoop-ass mode’ as the NFL enters the final quarter of the season. I look forward to seeing how they hold up against the gold standard of the sport in Foxboro this coming Monday night.