MOCKSTRAVAGANZA REDUX: A (Revised) Look At 18 Mock Drafts From Around The Internet

Share All sharing options for: MOCKSTRAVAGANZA REDUX: A (Revised) Look At 18 Mock Drafts From Around The Internet

When last we experienced a massive mockgasm (or mockkake, if you prefer, which you probably do not), we were 71 days away from the 2012 NFL Draft, and the NFL Combine had yet to be completed. But now? Well, things have changed, H.I. Now we're but a mere 49 days and (roughly) 10 hours from your Houston Texans being on the clock.

With that in mind, it seemed like a good time to re-examine the various mock drafts from around the World Wide Web. We'll stick with the same 18 drafts as in the previous post, just for the sake of consistency (read: because that lets me copy-and-paste the formatting from the previous post, and I am a tremendously lazy person).

As always, If you know of any decent mocks that I have missed, please add them in the comments with a link and the name of the player currently predicted to go to Houston. Now, let's see if people are predicting that biology and the prejudices of others will conspire to keep us nose tackle-less.

WR Kendall Wright, Baylor University. Best I can tell, the thinking among all draft pundits regarding Wright goes like this: we thought he was a Top 20 pick; he's not; the Texans need a WR; they'll take Wright. I don't buy that for a second, mind you. Wright is not of the size or type that Gary Kubiak and Co. like, and he's a terrible value as a first-round WR.

Choice quote (that sounds like someone describing an ugly girl as having "a great personality"): "His hands are also fine."

Choice quote (that overlooks that only one Big 12 CB ran a sub-4.5 at the Combine this year): "Wright will be looking to improve on the 4.61-second 40-yard dash at the combine when he runs at his March 21 pro day, but his stock hasn't been hurt much because he plays much faster than that on tape."

WR Stephen Hill, Georgia Tech. Credit Walter for at least mocking a WR of the appropriate size to the Texans. Then slap him with some demerits for picking a WR that has no experience running West Coast-style routes and for citing the Houston Chronicle as an authoritative source that "confirmed" that the Texans will definitely take a WR in the first round.

I'm not actually against Hill as a draft pick per se, but I think he's far too raw and too unlikely to be a huge contributor in 2012 to be worth a first-round pick for a team like Houston. The first pick seems much more likely to be on the defensive side of the ball, since some dude named Williams is likely a goner, and the second round is deep with quality WRs who could fit the Texans' system. Gimme Toon or gimme death!

This mock was posted here yesterday. I don't know about you, but I'm already beyond sick of the Wright-to-Texans talk. I'm willing to say there's zero chance that the Texans actually select him in the 2012 NFL Draft.

Choice quote (that eschews actual analysis): "Wright might be the draft’s top vertical threat and has the ability to open up a lot of options for the Texans offense down the field."

WR Stephen Hill, Georgia Tech. Five mocks, five WRs, zero scenarios that seem likely to me (though I will say that Hill seems the most intriguing, just based on upside). This one was already discussed here at BRB.

Choice quote (that ignores how raw Hill is, especially for a West Coast offense): "Houston can use him right away, and not be forced to rely on him with Andre Johnson in the lineup."

WR Rueben Randle, LSU. As a general rule, I don't like players named after sandwiches. I mean, I can't think of any others, but I am pretty sure I feel this way. As a more specific rule, I don't like any offensive players off this year's LSU team, at least not in the first round, though I could be punishing the entire group for the failings of Jordan Jefferson.

As discussed here, Lance has the 6-4/208 Randle as the fourth WR taken behind Blackmon (6-Washington), Wright (15-Philadelphia), and Floyd (19-Chicago).

Choice quote: "The Texans' biggest need is at WR and Randle has the size and speed that will intrigue Gary Kubiak and Rick Smith."

Previous pick: This one was unchanged from our last Mockstravaganza, so I left the entry unchanged as well.

WR Alshon Jeffery, South Carolina. While FF's previous mock pick for the Texans left me aroused in my nether regions, this one (which, admittedly, was posted on 2/22/12) leaves me feeling as disappointed as Mike Kerns' wife.

Choice quote (that ignores the Texans' three Top-5 passing offenses in the last four years): "A receiver opposite Andre Johnson has been a need for years, and it continues to be apparent."

WR Kendall Wright, Baylor University. Draftek's Texans-related picks seem to be boiled down to "whichever WR that people have heard of manages to slide down the board." So, in keeping with that strategy, they mock Wright to the Texans with OLB Nick Perry, SILB Donta' Hightower, and DE/DT Jared Crick all still on the board.

Of course, they also have TE Coby Fleener falling to #50, so it's possible that the entire group at Draftek is on drugs.

Choice quote (that demonstrates that nobody at Draftek has ever actually spoken to a Texans fan): "Before the combine, Texan fans would have ceded water rights to get this guy."

WR Rueben Randle, LSU. Keep in mind that this mock was done on Monday. Like this past Monday. Monday, March 5. Well after a disappointing Combine showing had people like Mike Mayock dropping Randle completely out of their Top 5 WRs. This seems to be putting a lot of eggs --- far more than Luke could eat, even if Dragline was cheering him on --- in the Pro Day basket.

Granted, Randle was the #1 WR in the nation coming out of high school, and he has the physical tools that you like to see at the NFL level, but (a) he's been disappointing so far and (b) LSU WRs under Les Miles don't have the best track record in the NFL.

Choice quote (that is both an understatement and a sign that people still don't get the difference between Wade's system and traditional 3-4s): "The Texans could also stand to upgrade at nose tackle, where journeymen Shaun Cody and youngster Earl Mitchell are serviceable but not the type of massive space-eaters that you traditionally see in the middle of an odd front."

WR Kendall Wright, Baylor University. What do you think about this, Kyle Broflovski? 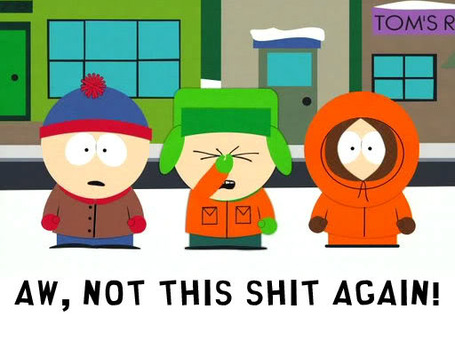 Choice quote (that presupposes that Texans scouts watch an inordinate amount of Baylor games): "Houston scouts will know better than most about Wright's big play potential and might envision his speed and elusiveness as a perfect complement to Johnson."

WR Rueben Randle, LSU. You know earlier when I said I was opposed to players named after sandwiches? I am willing to ignore that rule for a real NT, even if his name is Monte Cristo. Randle ain't that.

Choice quote: "While Arian Foster and the rushing offense picked up the slack, Johnson's absence exposed a need for more weapons at receiver."

Previous pick: Like Zierlein's Randle pick, this was unchanged, so I left the original entry unchanged as well.

WR Rueben Randle, LSU. Another mock that actually has Randle higher than it had him before the Combine. Because . . . um . . . ponies?

Choice quote (that I may have just made up): "Oh, sure, Whitney Mercilus and Brandon Thompson are still on the board, but with playmakers like Shaun Cody and Earl Mitchell up front, those guys would hardly fill a need."

C Peter Konz, Wisconsin. This is based on the "if Chris Myers leaves" angle, but, hey, I salute TBL for at least considering things like that, if only to make the otherwise pointless act of mocking a draft interesting. In the situation where Myers is no longer a Texan, I really like suppose I don't mind taking Konz with this pick. Thing is, I don't think Konz falls to 26. Also, looking again at value, I'd rather have David Molk (Michigan) in the third (or fourth or fifth, depending on your sources) over Konz in the first.

Choice quote: "Yes, there’s a big need at WR, but I think the big names fly off the board early and Alshon Jeffery’s weight gain pushes him way down the board."

Previous pick: Big Lead has not done a new mock draft since the Combine ended, so this is the same as the last time. I tweaked this entry slightly, however.

WR Mohamed Sanu, Rutgers. It's like a visit from an old friend! Of course, most everyone else has decided that Sanu is not a first-round talent --- a position with which I wholeheartedly agree --- but DraftSite.com pushes ahead with the same creative outlook that undoubtedly lead to the name of their website.

Choice quote (that I think they would write if they actually wrote anything about their mock selections): "Sanu fills a need that the annually anemic Texans' passing offense has refused to address for the last 25 years."

Previous pick: WR Kendall Wright, Baylor. Pitchfork likes that they were on board with this pick before it was cool and that they abandoned it once it was.

WR Alshon Jeffery, South Carolina. Last time around, they had the Texans taking a DT/DE. Since that mock, based on nothing that the Texans have actually done, MyNFLDraft has decided that WR is more pressing than someone who can play along the front five. I'm guessing they read that somewhere.

WR Alshon Jeffery, South Carolina. I'm sick of talking about WRs, so here's a joke for you:

A. Because it made him mean.

Choice quote (that ignores the previous pick that this exact site made for this exact team): "The Texans have a very good defense already so I have them going to the offensive side of the ball with this 2012 NFL Draft pick."

They don't provide any discussion at all, so there's no choice quote. Instead, here's an "Archer" clip.

Fun fact: the age of consent actually is 14 in Germany, but FX would not let Adam Reed make the girl in the show 14.

OLB/DE Nick Perry, USC. They are sticking with Perry for this pick and, given the WR-centric picks that everyone else seems to be making, the Perry pick makes me happier than it should. (Of course, they also have us taking C Michael Brewster --- a/k/a the third-best C in the Big 10 --- in the third round, so they are "scholars" like Antonio Smith is descended from a clan of black ninjas).

Choice quote (that is both factually correct and likely inapplicable to the discussion): "But the reality is with Arian Foster and Mario Williams coming into some pretty big pay days, they won’t have a lot of money for the future."

There you have it. According to the brilliance of the internet, your Houston Texans are roughly 147.4% likely to draft a WR in the first round. Also, Rick Smith and Gary Kubiak would apparently rather fornicate with a syphilitic rhino than draft defense on April 26, 2012. As I did last time, I pose the following questions to the denizens of BRB:

2. Of the universe of players NOT mocked to the Texans in the above drafts, who would you most like to see the Texans take?