Whitney Mercilus Wasn't Born In Texas, But He Got There As Fast As He Could

Share All sharing options for: Whitney Mercilus Wasn't Born In Texas, But He Got There As Fast As He Could

Whitney Mercilus, whom tGC has already nicknamed Ming, is now a Houston Texan. And I, a person that tGC has not heretofore nicknamed, am supposed to write a reaction piece about him.

Thing is, I'm still not entirely sure what my reaction is. I mean, I certainly didn't want Coby Fleener (and, truth be told, I kind of think you were a complete fool if you did, no offense). Nor did I have any desire for Stephen Hill. I wanted the Texans to go defensive front seven on the first pick, and Chandler Jones was gone, so Mercilus made sense on that level.

/pauses to think about the pick for a minute

Yes, Nick Perry was on the board, and his edge speed made him intriguing (not that Mercilus is slow, mind you). Still, Mercilus gives the Texans a guy who just put up 16 sacks and 9 forced fumbles on a team with very little defensive talent. Even if it was only one season, that's a hell of a single season to put on your resume.

(Do prospective NFL players have resumes? Probably not, I guess. Whatever.)

Besides, it's not like guys with a single dominant season as an NCAA pass rusher have no track record in the NFL. Jason Pierre-Paul and Aldon Smith come to mind as far as recent picks in the Mercilus mold. It can work. And, at the end of the day, there's the X-factor: Wade Phillips. If he wanted Mercilus, then, by default, I wanted Mercilus.

I just didn't know it until tonight. (Maybe I should have asked Denard Robinson.) 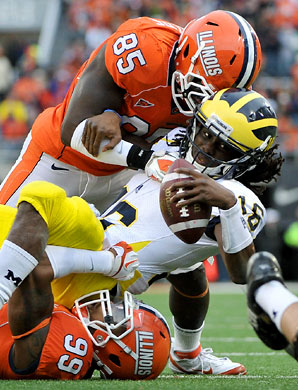 Anyway . . . yeah. It's all good. I'm happy. Mercilus is going to wreck faces and dominate fools. And he and Cushing will high-five when the latter ends Kendall Wright's life on a crossing pattern. GOOD TIMES!

Also, if tGC is looking for a nickname for me, I suggest one of the following: Hercules Rockefeller, Rembrandt Q. Einstein, Handsome B. Wonderful, or Max Power.