Share All sharing options for: Meandering Sunday Thoughts On The Texans' 2012 Draft

Words that best describe my past four days: football, beer, Grim Burger, Blue Moon Screwdriver, crawfish, and football. Oh, and flipping off Charley Casserly every time he was on TV. I mean, seriously, the guy who destroyed two franchises from the inside gets paid to talk about football? Really? OK, I'm done ranting, and there's real fluffy posting material after the jump.

Thursday: We kicked off the draft festivities, and a couple Austinites joined me to watch the first round of the draft, most notably, NoSafetiesNeeded and f224abandit. It was a pleasure to meet y'all. Even though, at the time, I thought we'd go Nick Perry, Wade Phillips jumped all over Whitney Mercilus. During the 2011 season, Mercilus was my second favorite non-UT college player to watch with RGIII being the top (I mancrush hard on RGIII). Leading up to the draft, however, I worried about Mercilus being a one-year wonder, something reflected in his SackSEER rating on FO. I thought we'd lean Perry because of his big school cred and his slightly better measurables.

But I couldn't be more excited about this pick. Mercilus has an incredibly relentless motor (grit, if you will), and he led the NCAA with 16 sacks. What sticks out to me, though, are those nine (9) forced fumbles. That's getting to the ball and wreaking havoc with a vengeance, and the thought of this at the pro level makes me tingle in exciting ways.

Friday: I made the trip from the ATX down that giant Construction Zone known as Hwy 290, eventually ending up at the 360 Sports Lounge for BRBAPALOOZA. I had a great time seeing old faces (Jordann, chrisd21, Steph, etc. etc.) and some new faces (winohamster, FreedomRide, JimboTexan). Please don't be offended if I didn't list you! Evidently, Shake has been castrated, and we wish him the best of luck with that. The hit of the evening may have been papabear on the porch handing out ZJs like they were Skittles.

Once we finally made a pick, we opted for Ohowihateohiostate's DeVier Posey. When he was announced, MDC immediately ripped off his pants and did the "airplane" around 360 for 30 minutes solid. I don't think I've ever seen so many Laws of Physics broken simultaneously. 360 is probably still cleaning up the mess.

Posey, to me, is an interesting pick. When looking at his scouting report and measurables, it screams "Kevin Walter." If Posey has a career anywhere near Walter's, we've made an incredible pick, so I need to temper my enthusiasm for him quite a bit. chrisd21 gave us a play-by-play of his post pick interview, and I already have a fondness for Posey.

We tapped Brandon Brooks in the 3rd Round, which caught me by surprise for a number of reasons. First, we actually had him in town for an interview. Normally, this Front Office doesn't tip its hand in the least. Secondly, Brooks is huge. But if you look at his play and his measurables, he seems to be a great fit for the ZBS. I cannot tell you how excited I am about 680 pounds of Brooks and Derek Newton anchoring the right side of our offensive line.

Saturday: For some reason, I woke up covered with "Woo Pig Sooie!" written all over my body in mud. Fortunately, I was wearing my brand new chastity belt (NSF Mental Health), so all was safe. Mostly. We won't talk about it. Those crazy Arkies. This is what I had for brunch: 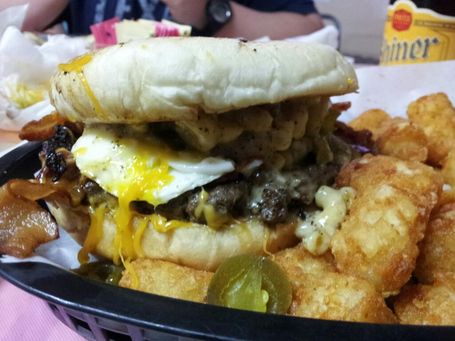 This is a Grim Burger from Lankford Grocery, which has cheese, bacon, jalapenos, fried egg, and handmade mac and cheese. The only thing that could've made this burger better would have been if it'd been hand fed to me by Allison Brie my wife. Lankford, if you'd like to sponsor the blog in any way, I'm sure we can work something out.

As for Ben Jones? This. Shorter Much longer Ben Jones: "I'm going to go to your house, beat you down, rip up your sod, and eat your grass. Then, I'm going to poop it out and make you clean it up with chopsticks." The only thing that could've possibly made this better had been if he played this game on Astroturf and picked up a chunk of concrete with it. And eaten it.

Jones might be the most stereotypical player taken this year: good technique, nothing elite, team captain, multi-year starter, and eats, not smokes, grass.

Our next pick was Keshawn Martin, WR/KR from Michigan State. Upon learning this pick, MDC stripped naked and ran out of the yard, and has yet to be seen again. If you see a pudgy short guy running, naked, yelling "WHOOOOO!" and sounding exactly like Mickey Mouse, please contact your local authorities and do not confront. Thought to be heading toward Belize, possibly with a stolen Doberman Pinscher.

Martin screams slot receiver with his excellent speed, and he found five different ways to score while at Michigan State (which is five ways more than DreKeem). The chances Carter Liles finally gets his wish and Jacoby Jones is gone is pretty high. Any rumors that we could actually get something in return for Jacoby were started by somebody who is high.

It's obviously early, and I might still be drunk, but Jared Crick looks like the best pick of the entire draft. Check that: I won't be sober for at least a week.

Not many people were pleased when we drafted Randy Bullock, and that's perfectly understandable. I, however am not one of those people. Bullock will be cheap, under contract, and he's far more likely to make the team than your typical fifth round pick. After the run on kickers in the 6th, it's also clear we got the guy we wanted. Bullock has a decent track record of touchbacks, and he appears to be very accurate 45 yards and less. I have absolutely no problem with Bullock in the fifth, and it's not like he's a punter in the third.

Nick Mondek was nabbed in the sixth round. I know absolutely nothing about him, and he appears to be a project, so he looks like an early Practice Squad candidate.

Overall, and it's incredibly scary to say, but I'm elated about this draft. I will knock on wood now. We picked up talent, we filled holes, and we found fantastic late round value. Even with Mercilus and Crick, my favorite player of the draft might be Brooks.with his tremendous upside. The thought of Gary Kubiak, Ryan Dennison, and John Benton working with Brooks makes me downright giddy.

I love this draft, and I cannot wait for the season to start.