A Look At The Lego Blocks Of Victory--Part 1: The Passing Game

Share All sharing options for: A Look At The Lego Blocks Of Victory--Part 1: The Passing Game

I've not been around much lately because I've spent the majority of the past few weeks traveling for both work and pleasure. I wasn't released unexpectedly, I didn't sign with Buffalo Rumblings as a free agent, and Tim didn't trade me to Bleeding Green Nation for a fourth-round pick in the next SB Nation Mock Draft (which, let's face it, would have been an absolute steal for Tim).

No, instead, I've been working in New England and sipping cold beers on Captiva Island on the Gulf coast of Florida. Then, when I got back, it was like the the real job decided to treat me like J.J. Watt treats a quarterback for daring to take a few days off.

So that explains my absence (if you cared... which you probably didn't).

But during that time, I got to thinking. Specifically, I was thinking about what elements of a football game truly drive victory. We often talk about various statistics as the reason a team may have won or lost a game, but all statistics are not created equal. Perhaps there's a way to truly identify the ones that have a greater impact on a team's won-loss record. So to start, I spent my time specifically thinking about offensive production relative to average defensive production of the various teams on our schedule. That, and boobies.

What follows is the beginning of a series of posts where I look at the performance of the team from a variety of different angles. This will be a work in progress as I will continue to manage and develop the concepts as we go along, but, since there's not much else to talk about, maybe it'll help fill the gap a bit.

As with any analysis, it's important to try not to jump too far down the line of thinking up front without fully vetting out your methodology first, so this first post will be a little light on the statistics as we just massage our way down the logic path.

To further simplify things, I've decided to start with just the passing game -- don't worry, we're not going to ignore the running game or defense. We may even get into special teams.

I decided to focus my attention on three main statistics: passing yards, completion percentage, and passer rating. I selected these because I felt they gave a good cross-section of cumulative and efficiency stats. Try not to to get too wrapped up in whether these are the correct stats or not. Since we're on the ground floor of this operation, I didn't want to add a bunch of factors until we see how this thing plays out. We can always revisit it in the future and add or change the statistics that we want to look at.

Ok. With that said, here's the approach I took. For each game, I took the raw number for each of the statistics above and the average season-long stat for the opposing team's defense, and then I calculated how the Texans' number compared to the opposition's number by percentage. I looked at this on a week-by-week basis for all 18 games played this past season (regular season plus playoffs).

So, for example, in game 7, Matt Schaub passed for 296 yards against the Titans. The Titans gave up 226.8 yards on average over the season, so Schaub performed 69.2% better than average.

Now, credit where credit is due, this is the same approach that BFD did a few years back when looking at the team's defensive performance. This will be our starting point and we'll see where it takes us.

Got it? Alrighty, then. With the preliminaries out of the way, let's look at the pictures, starting with passing yards. 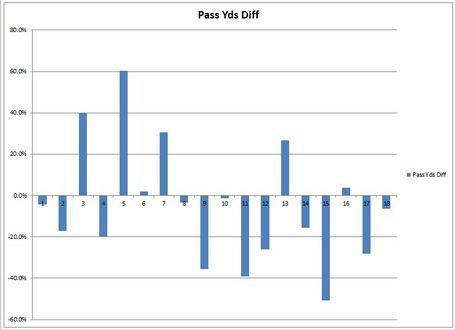 First off, we notice that there is a lot of variation from game to game. That's not really unexpected either. If the Texans put up 300 passing yards against a team that gives up 250 on average, it wouldn't exactly be BREAKING NEWS!!! That would show up as a positive 20% difference on the chart above.

So we need to calibrate ourselves as to what actually qualifies as a significant difference. There are statistical methods to do this, but that will require calculating standard deviations for each team's stats, assigning distribution curves and reviewing probability distribution curves. If the analysis dictates that we should do that, we will later, but for now, let's just crank up the Swagmaster 3000 and say 40%.

"Hey," you should be thinking right now, "the Texans lost three of those four, including the two where they were over!" That's right. They also won the Jaguar game where they were at -39.2%.

What this tells me then, is that at first glance, passing yards are not highly correlated with victories. Or, perhaps looking at it from a different perspective, the Texans only rack up big passing yards when they're down in games. This will become more interesting as we combine the data with running stats as well. For now, though, let's not draw any firm conclusions on this. We'll just mark it down as an interesting observation and proceed.

Next, let's look at completion percentage. 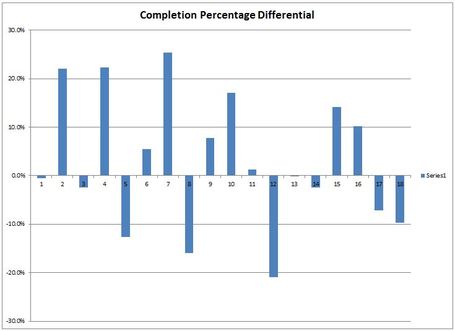 You'll notice that the scale on the y-axis is significantly smaller than on the previous chart. Whereas a 20% differential on the previous one was merely a blip, here it seems to be quite significant, so let's use that as our initial marker.

Lastly, before we get to the final graph, let's have a very brief discussion on passer rating. The calculation for passer rating is rather simple. Or, not. I copied it over here for a second, but it blew up my post, so instead, if you're interested, I'll direct you to the Wikipedia page.

We all have our beef with the passer rating system, but in general, I will give football credit for attempting to develop a scoring system that incorporates various elements of the game into a single metric. For those who don't feel like clicking or sorting through equations, essentially, the rating looks at completion percentage, interception percentage, TD rate, and yards per attempt, weights them differently, and then combines them into a final score. I would have preferred that they normalize it to 100, but it is what it is right now.

So when we perform a similar exercise using passer rating, we need to keep in mind that we're actually accounting for a bunch of variables in one shot. My initial expectation is that it should have a higher correlation simply because it's accounting for more variables (/foreshadowing for future posts). 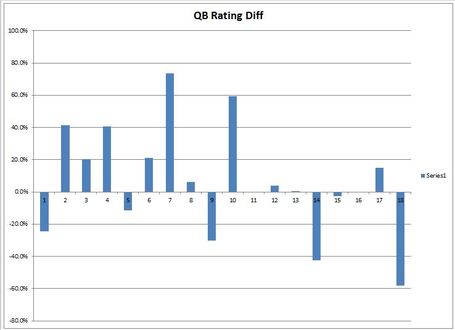 First off, let me note that games 11 (Jacksonville) and 16 (Tennessee) are excluded from the data set because the team had multiple quarterbacks playing in those games. As such, no total passer rating is available. I guess I could calculate it, but to be honest, there are a lot of things I could do.

Yes, there are other negative scores that had wins and other positive scores with losses. More likely than not, when you're on the "wrong" side of the 0 mark, you can either be "saved" or "drawn back" by other elements of the team such as the running game, defense, or special teams. When the passing game falls extremely on one side or the other, though, it may overwhelm the other aspects of the game such that it becomes more of a defining factor in winning or losing.

So what have we learned so far?

First off, we know that there is no single metric that pertains to the passing game that can determine victory. That should have been obvious before we even started this exercise, so please don't knock the effort just because we didn't come to a definitive conclusion on that end.

But let's take that a step further. We've learned that you can't point to a single metric as the "reason" the team won or lost. Think about that for a second. How many times, after a game, do we say something along the lines of, "our passing game cost us that game -- they only managed 150 yards!" I'm not pointing fingers either. We've all done it.

We've also learned that there was a pretty significant difference between when Schaub and Yates had the reigns. Look at the QB rating chart. Schaub only had three negative scores and two of those were still victories. Yates on the other hand had two horrendous scores and only one noticeably positive one.

Yes, it's unfair to compare a rookie and a veteran, and, no, I'm not knocking T.J. I still love the way he stepped in and helped bring the team its first playoff appearance and victory. The way he clinched that playoff berth will always transcend statistics and be a treasured moment in Houston sports history.

Still, we need to remember that he was only a rookie and, while he performed admirably, he still has a long way to go before he gets to the level of Schaub. This may be an important point as we discuss Schaub's contract next season.

From here we'll take a look at the running game, the defense, and maybe even special teams. We'll take our best bet as to which combination of statistics provide the best predictor of victories, and then we'll bust out the 40 ounce statistical baseball bat and actually attempt to quantify the impact of each of these stats.