With The Sixteenth Pick Of The 2012 BRB Mock Draft, The New York Jets Select...

Share All sharing options for: With The Sixteenth Pick Of The 2012 BRB Mock Draft, The New York Jets Select...

What's that? You've realized over this past weekend that your recurrent bouts of clinical depression coincide exactly with weekend-long breaks in the BRB mock draft? That's terrible to hear. I am very sorry. Put away that bupropion, however, because I have some great news: the mock draft is back! I know . . . I can hardly believe it myself!

In a twist that would be ironic if I hadn't contrived the entire first paragraph, the team that is here to act as adjunctive therapy for your anhedonic symptoms is the NFL's highest-profile collection of mental illnesses, the New York Jets. Having addressed their lack of a real QB by bringing in a QB who actually makes Mark Sanchez seem good, which direction will the Jets go with this pick? After the jump, rexthejet puts his best foot forward and kicks off our new week of mockery.

Since the Jets have spent this offseason addressing their needs for a Tebow and an Australian rugby player, the Jets still have a few needs that must --- must! --- be addressed in the draft. They are:

OLB: This has been an area of need for the Jets for the last couple of years. They somehow came one game shy of the Super Bowl in 2010, despite the fact that Bryan Thomas, who is known more for his run stopping prowess, led the team with 6 sacks. Aaron Maybin, who was even cut by the Jets before the regular season, became their best pass rusher, despite the fact that his playing weight hovers around the 220s. Thomas will be a free agent next year, and the Jets will save $8 million if they cut the aging Calvin Pace after the season. Obviously then, the Jets could really use one of the many pass rushing OLBs that will be available in the first.

WR: Plaxico Burress has not been resigned, so as of now our wide receiving corps consists consists of:

These 4 combined for 111 catches last year. I think Schillens has some potential, but the Jets will need a better option then an oft-injured receiver who has 72 catches in his 4 year career. The Jets can use another target for Sanchez, preferably a large target that can go deep.

Safety: The Jets were destroyed by TEs last year. I can show numerous videos of Rob Gronkowski catching another pass at the expense of Eric Smith, but this will cause me deep pain. The Jets did sign Laron Landry, who might very well be suspended, so it is unlikely that he would start this year. Landry will be a FA after this year, and Smith will a FA after 2013, so, as of now, both SS and FS are needs for the future.

RT: Wayne Hunter. That's all that I'm going to say. Sadly, it looks as if we might go into the season with Hunter and Vladimir Ducasse battling it out for the final spot. Dear Lord.

So, for my pick: Melvin Ingram, OLB, South Carolina.

The dude is a beast. Guy ran a 4.66 in the 40, put up 28 reps of 225 pounds, and has the stats. He looked great in the cone drills, so I'm not worried about him playing OLB. I'm thrilled that he's even here; some mock drafts even have him going to the Jaguars. He played great against good competition in the SEC, and he will be a great addition the the New York Jets. Rex will have a field day with him.

One more thing: As GM of the Jets, I will trade Tebow for a llama from a zoo in Jacksonville on draft day. The Tebow fans can go to the zoo and stare at Tim, while Rex will eat the llama use the Llama as a mascot.

The Cincinnati Bengals, in the form of Deaconbrodie, are now on the clock. Might I suggest drafting someone who can prevent this? 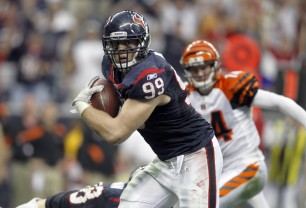 Just kidding . . . there's nothing that can prevent that, because J.J. Watt was created in a Wisconsin lab from the DNA of Harold C. Agerholm, Ken Keltner, and John H. van Vleck. (Did I choose this angle based on the Katy Ginger being in the background? Maybe I did, and maybe I did.)