Share All sharing options for: Memorial Weekend Brisket Showdown: Fat Cap Up vs. Fat Cap Down

First of all, re-iterating what Tim mentioned today, thank you to all those who have and continue to serve. Both my wife and I come from families with a vast military heritage (though hers were all officers and mine not so much), and the bfd family greatly appreciates all you do. 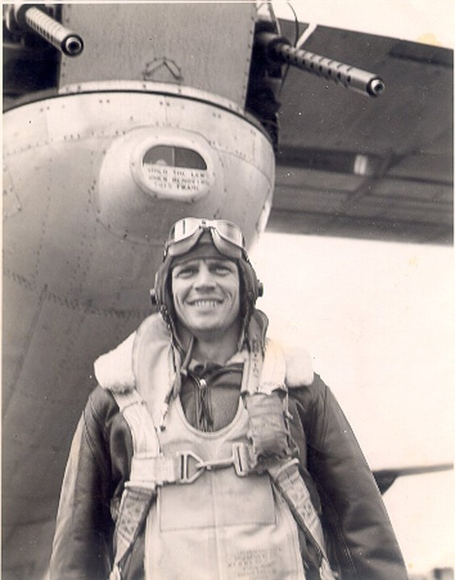 My grandfather and one of the B-24 Liberators he served on during WWII, with his first mission being on D-Day. The Chief of Staff of his wing was Jimmy Stewart. Yes, that Jimmy Stewart. On to the showdown...

I took advantage of having a little extra time over the weekend to finally settle (or not) the age old brisket question: fat cap up (FCU) or fat cap down (FCD)? I asked my butcher (yes, I have a butcher. Do you not?) to cut me two very similar briskets for the showdown. He rewarded me with one weighing 3.3 pounds and one coming in at 3.2 pounds. They looked like veritable twins they did.

As usual, I applied a mustard bark with my simple rub to each. The local Austin foodie magazine had an article on Robb Walsh's new book, which just happened to have a blurb on Franklin BBQ, Austin's tremendously successful BBQ joint and a Louie Mueller protege. I mostly used the Franklin method to cook these suckers, which was a fairly large deviation from my norm.

Normally, I smoke briskets for at least 1 1/2 hours per pound at 225 F, then foiling for at 30 minutes. Franklin's butcher paper recipe calls for smoking for roughly 1 hour per pound at 275, wrapping in butcher paper, smoking for 2 hours, then putting in an oven for 2 hours at 200 (or a cooler). Franklin's recipe (assuming 6-8 pound cuts) shoots for an internal temp of over 200 degrees. For the size of those I had, I smoked for a little over 3 hours, foiled them, smoked for another hour, then in the oven for an hour.

Both of my briskets were, obviously, placed on the coldest part of the smoker for this cooking. I added some sausage and salmon when I foiled the briskets because, heck yeah I did. My smoked salmon is absolutely incredible. I'm just kinda rubbing it in right now. After I pulled the briskets out of the oven, I let them rest for 30 minutes before slicing. Some observations.

The most noticeable difference was the size of the briskets after the process. The FCD brisket was far smaller, and the cap just seemed to have disappeared. On the FCU brisket, the cap was still more than noticeable. I cut a couple slices of the FCD brisket, and I was able to easily see the grain and cut it properly. In fact, when I was moving the brisket to a cutting position, I accidentally pulled off a half-fist sized chunk of the brisket. It just flew right off. On the FCU brisket, I had a very hard time seeing the grain, and my first cut was with the grain more than not. I immediately noticed the FCD brisket cut more smoothly than the up.

(As an aside, I once yelled at a guy in Lockhart - quite literally - for cutting my brisket with the grain. I demanded he make fresh cuts for me against the grain, and I volunteered to do so adding in no uncertain terms I would do it myself if he were unable to do it properly. Properly cutting your brisket is hugely important.)

After seeing the briskets, I'm not surprised at all the FCD brisket was simply more moist than the other. That said, I'm not saying the FCU went to the dogs. Nope, not at all. Both were mighty damn good, but the FCD was a wetter, more tender brisket.

Was this effort scientific? No. Was the testing double blind? Not so much. Will I be forevermore smoking briskets fat cap down? Oh most definitely yes.