I caved into myself today and purchased the shiniest, most expensive package for NFL rewind, which allows me access to "All-22" coaches film. Being the nice tolerable guy that I am, I decided to write up a quick post to give you a look at what you get when purchasing the package.

Take a look at my new toy after the jump.

For starters, I want to take a look at what you get in the normal broadcast mode of rewind, which is literally a rebroadcast of the game without commercials. All commentary, replays, and annoying CGI robots are still intact. In particular, I want to show you how we originally saw a completed pass to Anquan Boldin on 2nd and 4 with about eight minutes left in the 1st quarter. As some of you might remember, the general BRB perception of this game is that Kareem actually did pretty good throughout the contest, and that he was merely the victim of a string of circus catches from a veteran receiver...but is it really that simple?

In the first image, you can see Boldin lined up at the top of the screen with Kareem Jackson in press coverage. We don't really get to see any proper view of what is going on formation wise, so the viewer has no real context of the play. 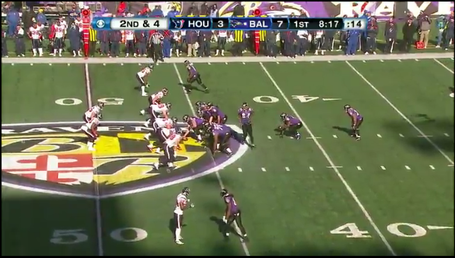 In the second still, you get a good view of Kareem's jam on the inside shoulder, a half second later he turns his hips and runs with the perceived fly route stride for stride. It's solid coverage. 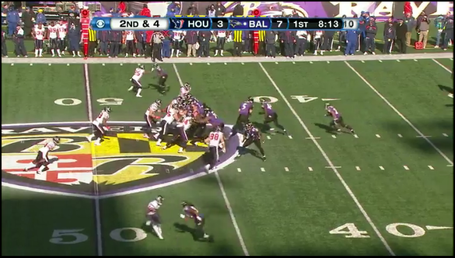 As the rush closes in, the camera stays locked on Joe Flacco (as it should), but the two players we want to analyze are now sprinting out of frame. 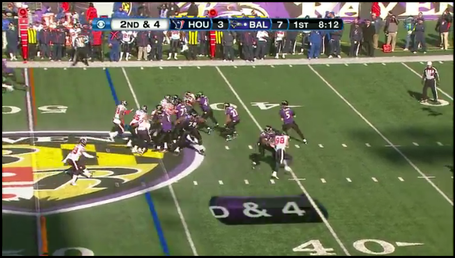 By the time Flacco releases the ball, the camera only catches a glimpse of the rather spectacular catch that Boldin makes. It appears, however, that Jackson was all over Boldin and that he was unable to cover the famously indefensible "back shoulder throw". 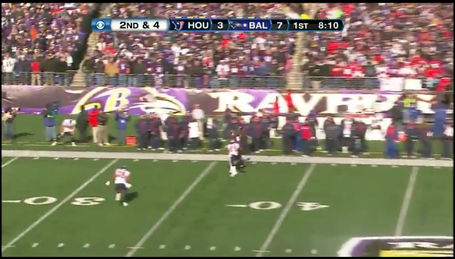 Was the coverage actually good, however? The replay doesn't really help as the tape begins after Boldin has already created separation. We don't know how either one of these players got to where they are. We don't know where anyone else is on the field. We don't really know anything that allows us to put this still into context. Let's try on the next angle. 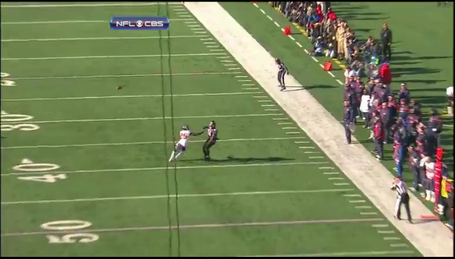 Strike two. We get a look at the route from beginning to end, but the angle doesn't really show us exactly what happened other than Boldin turning around and catching the ball. It's tough to tell relative movement from such a shallow angle. 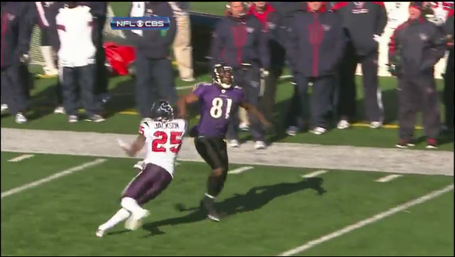 Again, the replay picks up after the break in the route and we still have no clue what actually happened. One second Kareem had good coverage, the next he's giving up a huge reception on the side line. What the hell happened? 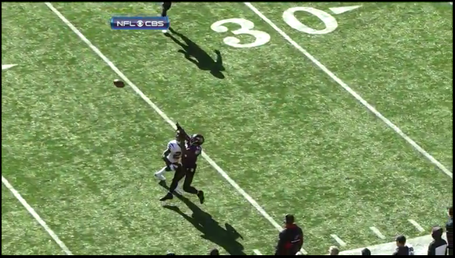 Enter NFL Rewind's "Coaches Film" and how it makes football that much more amazing to watch. Let's go through the same play from the ALL-22 angle and see what just happened to our young cornerback.

First up, the pre-snap formation. The Texans bluffed Cover 2, and then shifted into Cover 1 pre-snap as the Ravens motioned their tight end to bottom of the screen. Johnathan Joseph was on Torrey Smith, with Jackson on Boldin. Danieal Manning was the deep safety. Glover Quin moved down to the box in run support in case they ran away from the (new) weak side overload (which had Brooks Reed, J.J. Watt, Brian Cushing, and Shaun Cody all ready to go). As the tight end took up position, Connor Barwin shifted all the way out to the 7-tech to rush the passer one on one with the TE. This also doubled as a way to set the edge and flow any potential run into DeMeco Ryans and Quin. Overall, this is a sound formation against the Power I (See how much you can get from being able to see the whole field for once?). 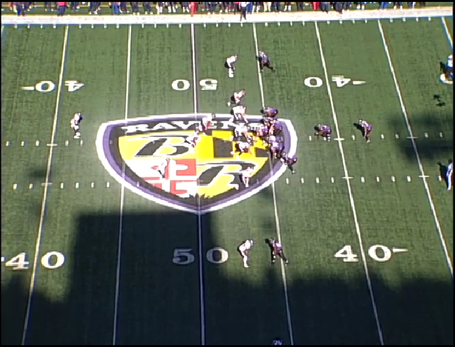 In a move that shouldn't surprise anyone who knows Wade Phillips, the Texans rushed 6 guys, almost all on the weak side. Ryans went balls deep into the strong side B gap in what was probably an attempt to get Barwin alone with the tight end (which worked). Cushing stayed back as the weak side spy, with Quin as the strong spy. A gutsy call which would have failed miserably against the run, but luckily Flacco didn't see it and audible into what would have been Ray Rice rushing into a GIANT canyon. Anyway, as you can see Kareem turned his hips and took off running as fast as he could...almost a little bit too fast. He's out ahead of his man, practically asking for a curl route to be shoved into his face, and Flacco sees it. 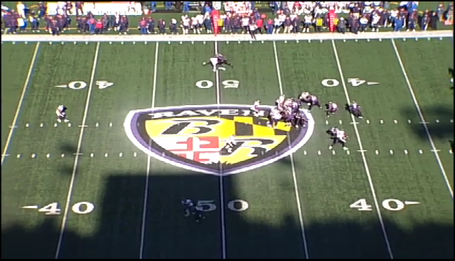 It's too late at this point. Kareem couldn't slow down in time. I zoomed in on this particular still because the ALL-22 isn't good for looking at tiny details, but you can clearly see that Boldin has already turned his body to go for the easy back shoulder catch on the side line. He boxed out an out-of-position Kareem without even breaking a sweat. 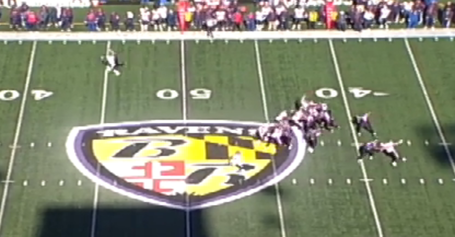 Well, won't you look at that. Kareem created the separation all by himself by just over-shooting his man. He was so worried about getting beat on the fly route (as is his custom), that he left himself completely open to the intermediate game. I'd like to call it a young player's mistake...but come on, man. He should know that Manning was deep for a reason. He should know that the safety is supposed to handle the deep angle in a Cover 1, NOT the corner. If he stayed on the hip of Boldin he might have been able to cross the receiver's body and break up the play, but alas...he didn't. 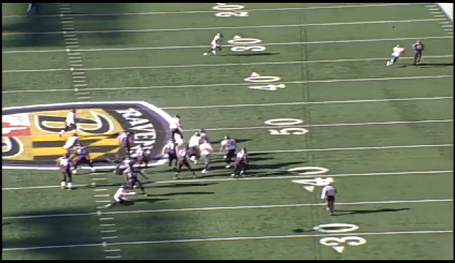 Let's hope he learns from this.

All in all, I really do love this feature on NFL rewind. I paid 70 bucks for a year's subscription, but I honestly feel like it will make my football watching experience that much better. I plan to use both the high-def broadcast angles as well as the All-22 angles to write many an article on week-to-week key plays and the season long development of our rookies this year, so keep an eye out for those.

What do you think of the new Coaches Film feature? Sound off in the comments.