After the Texans' 30-10 defeat of the Miami Dolphins on Sunday, Antonio Smith voiced his frustration with Dolphins left guard Richie Incognito.

"A dirty player being let to play dirty … Ricky Incognito. Everything that's illegal that can be done on the football field he does it, but mainly he was hitting people after the play, sliding down on your leg grabbing your ankle and trying to twist to break your ankle and he was doing it right in front of the referees and he was still in the game.

"It's the referees' job to stop him from doing it because everything that I would do to stop him I would get a penalty for.

"I told myself you've got to humble yourself and keep playing. There were so many times that I would have to loved [it] to just be like hockey. Drop the helmets off, drop the gloves, go fisticuffs. We're men. Let's go at it."

Incognito, of course, declared his innocence and stated that he no longer plays with questionable technique.

I will never apologize for the way I play football. Physical- Hard Nose football from snap to whistle. Get with it or get run over by it.

"It’s a label that has been with me since I was a younger player, when I quite frankly did play dirty and I would go after guys," Incognito said Monday. "The first couple of years in St. Louis, I was playing frustrated football. I wasn’t mature enough to handle the situations we were in. We were doing a lot of losing.

"So I think back then the tag was deserved. I have evolved, and I think that label still sticks. Once you’re labeled with it, it’s very hard to shake."

While doing tape study for different column I admit that I didn't pay much attention to Incognito's style of play, but it was really hard not to notice Antonio Smith thrashing about wildly and kicking Incognito in the head after a 2nd quarter fumble recovery by Daniel Manning. After rewinding and watching several times, mouth agape, I almost couldn't believe what I saw - Richie Incognito, in the open field, trying to tear another player's foot off with the refs right next to him. Amazingly, nobody on the officiating crew saw what looked more like a UFC match than the end of a football play.

I have not yet re-watched the game for a 3rd time, but you can bet that when I do I'll be keeping my eye out for more plays like this. Observe after the break.

This first still is during the play. The fumble has just been forced, and Antonio Smith is dragged down by his left ankle to prevent him from getting to the ball. So far, nothing seems to be going wrong. 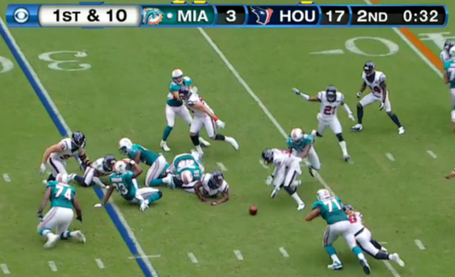 Smith tries to get up and rejoin the play, but is being pinned to the ground by his ankle, which is already at an awkward angle. 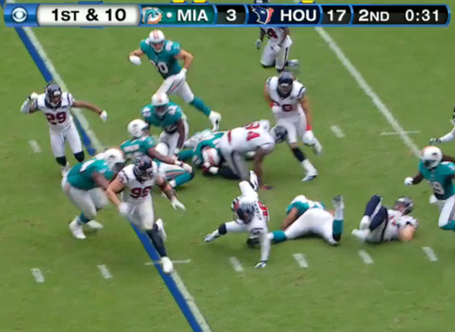 The ball is downed and the play is long over, which Incognito can clearly see as he stares at Daniel Manning going to the ground, yet he does not let go of Smith. Never mind the fact that he has now had Antonio's ankle for three seconds, he's already well into the territory of "dirty" at this point. 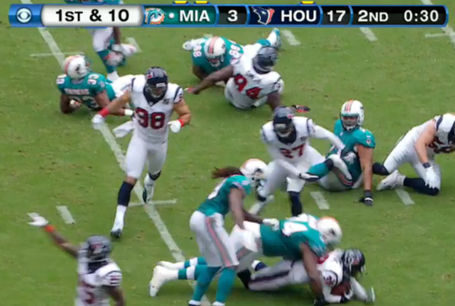 Another second goes by. The whistle has already been blown, and Incognito still won't give up that ankle. You can't tell in a still frame, but in motion he is violently ripping back and forth trying to cause injury. That's four seconds of holding and an intent to injure thrown in on top - right next to the referee - with no flag. 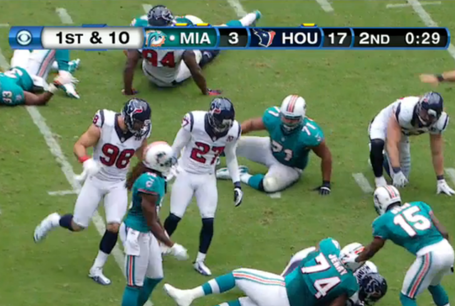 Wow this is just getting ridiculous. He's had the ankle for five full seconds and is STILL wrenching that ankle multiple seconds after the play was whistled dead. This is shameful. 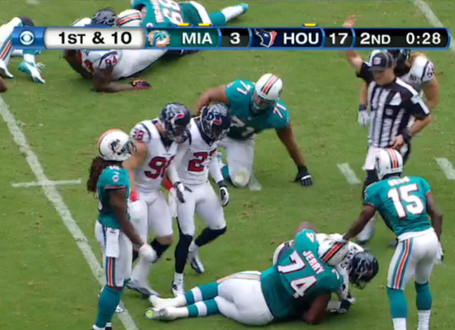 Smith has had enough and decides to defend himself. He lifts his leg and lets off a series of kicks to the head and shoulder to try to dislodge Incognito. I don't even care that you aren't allowed to kick at this point, this is pure self defense. 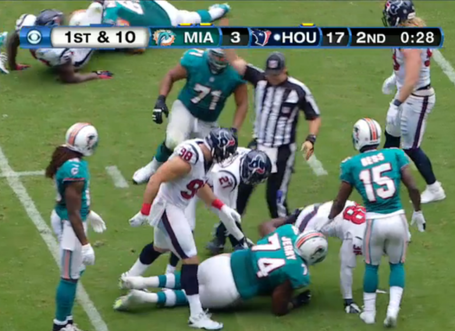 As the entangled pair gets panned off frame, Smith STILL has not gotten Incognito off of him and this "physical, hard nosed" guard is STILL wrenching at that ankle. There is no telling how long this went on after the camera stopped showing them. I don't blame Smith for what he said. If I had to put up with a 300 pound man trying to tear my limbs off and ruin my livelihood, I would be pretty upset too.

[UPDATE] Thank you to jerry.a.cambell for finding a video of this exact play on youtube.

I have no words for how much this play upsets me. This is football. This is a game of integrity and honor that serves as inspiration for millions of children every Sunday. How would parents feel if their twelve year olds took to the field and played like this? In the wake of Bounty gate scandal and the ever present debate on player safety, seeing someone go so far as to try to intentionally hurt another player is both disturbing and depressing. Richie Incognito, you are not physical. You are not hard nosed. You are dirty, and I sincerely hope you never have to face any member of the Texans defense in a dark alley anytime soon.