So, here we are again. If you're reading this you're either A: back for more wisdom about which teams to pick this week, B: bored and need something to take your mind off the tedium of everyday life (which is okay) or C: you're here by accident looking for the Two-Day Hangover. It''s a couple of doors down on the right.

Wouldn't you like to see some picks for Week Two? They're just over the jump. Not enough? Okay, how about if I throw some ZZ Top into the bargain?

Good. Over the jump we go!

So ignoring the Wednesday Night game from last week (since it was played before last week's picks; also, screw Dallas), last week I was 10-5 with my picks. Not bad, could've been better though (seriously, who would have guessed that Kevin Kolb would guide the Cardinals to victory?)

Hopefully this week will be better. Now let's look at the schedule for Week Two. This time we'll actually include the Thursday Night game, which will be played tonight. How novel is that?!

Chicago Bears at Green Bay Packers - The Packers rank 20th in pass defense and 31st in rush defense, according to Football Outsiders. They're also playing on four days rest. So what better time to have Jay Cutler, Matt Forte, Brandon Marshall and Co. come into town? Pick: Bears

Oakland Raiders at Miami Dolphins - The Fins better hope that nobody on the Raiders' defense picked up on their snap count like some other people we may or may not know. I'd say whoever has to watch this game deserves a bottle of scotch, but that's not hardcore enough for Raiders fans. So instead, whatever poor souls watching this game should get a free can of paint thinner. Pick: Raiders (though I have no idea why)

Cleveland Browns at Cincinnati Bengals - Wow, that was an ugly game on Monday night, wasn't it, Pride of Katy Andy Dalton? Don't worry though, as is the natural order of things in the AFC North, you'll get your chance to kick the lowest order of team. Dalton to A.J. Green should be a common occurrence, especially with Joe Haden slated to start his suspension. Pick: Bengals

Baltimore Ravens at Philadelphia Eagles - Sure, Michael Vick might have thrown four interceptions against the Browns; that's not important. What's important is that I lost the "Michael Vick Injury Pool." I was just sure he'd injure something other than his pride in Week One. Flacco and the Ravens should put these guys down easily. ::re-reads statement:: Too soon? Pick: Ravens

New Orleans Saints at Carolina Panthers - If Robert Griffin III can do that to New Orleans, what in the name of all that's good and holy will a pissed-off Cam Newton do to them? That said, the Saints did a pretty good job of containing the icon/entertainer last year and should be able to do it again on Sunday. Pick: Saints

Tampa Bay Buccaneers at New York Giants - The Bucs managed three sacks on Cam Newton and are up against a much less mobile quarterback in Eli Manning. But Justin Tuck hasn't slept since losing to the Cowfarts on Wednesday. As anybody can attest, when you haven't slept in a while you can get kinda...cranky. I just hope Justin Tuck doesn't kill somebody out there. Pick: Buccaneers

Arizona Cardinals at New England Patriots - The Cards are playing close to the vest as to who will start under center for them--an injured John Skelton or Kevin Kolb. Either one doesn't inspire a whole lot of confidence. Then again, this is the Patriots defense we're talking about. So maybe, just may--I can't even finish this statement with a straight face. Pick: Patriots

Minnesota Vikings at Indianapolis Colts - Apparently the Texans aren't the only team to be winless in Indianapolis. Currently the Vikings are 0-10 against the Horseshoes. You might think that'd be a win for the Colts, but Dwight Freeney is questionable for the game. If he's out, Adrian Peterson could run roughshod on the Colts. Pick: Vikings

Houston Texans at Jacksonville Mustachioed Glitter Kitties - Gabbert actually looked like a quarterback against Minnesota, from what I understand. That is just precious! Whether he can do that against the Bulls on Parade, however, is another matter. Pick: Texans (duh)

Washington Redskins at St. Louis Rams - If he weren't the embodiment of all that is wrong and evil in fantasy football, I expect Mike Shanahan would kiss the feet of the Rams GM for trading picks to get the aforementioned Robert Griffin III. Sidenote: Over/Under on number of games it will take for RGIII to take out a restraining order on John McClain - 5. You make the call! Pick: Redskins

Dallas Cowboys at Seattle Seahawks - The last time the Cowfarts were at the CLink (formerly Qwest Field) we were treated to this image: 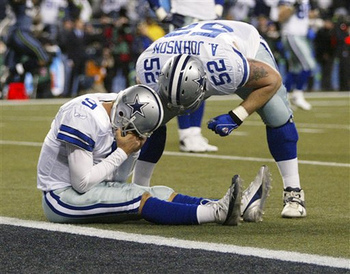 Ahhh, good times. Things have changed in the five years since that game, but one thing hasn't--the laughs we get when Tony Romo screws up. He'll be facing one of the most potent defenses in the league and because I can't bring myself to say that the team from occupied North Texas will win, I'll pick this as my upset special. Pick: Seahawks

Tennessee Titans at San Diego Chargers - LOL Chris Johnson. That's all. Oh, you want more? Okay, consider this: Chris Johnson averaged .4 yards per carry yesterday, which was almost as much as Matt Schaub ran on Sunday. .4 yards also roughly translates to 1 foot 2 inches per carry. I could average that. So let's get to the pick. Y'all know who I'm picking. Pick: Chargers

New York Jets at Pittsburgh Stealers - Well I can honestly say that I did not expect the Jets to hang 40+ on Buffalo last week. Unfortunately for the Jets, that means they've used up pretty much their entire offense in a single game. On the bright side for you, the viewer, Tim Tebow will purge the evil from Ben Roethlisberger's soul on national television. Or I made it up and there's no hope for weasels like Roethlisberger. Either way, you'll be watching. Pick: Jets

Detroit Lions at San Francisco 49ers - Never mind the game, I want to watch the end of the game when Jim Harbaugh goes out to shake Jim Schwartz's hand again. Because it worked out so well in the last go-around. Pick: Niners

Denver Broncos at Atlanta Falcons - Manning the Elder had a good game against the Steelers (although really, any game where the Steelers lose is a good game), but he's had better games. He'll have another test when he faces the Falcons. Grimes will miss the game due to a season-ending Achilles injury. Fortunately, the Falcons can rely on the services of good ol' Dunta Robinson...yeah. Pick: Broncos

So what do y'all think? Think I'm out of my mind? See a pick that you disagree with? Put it in the comments!