At the time of this writing, it’s 7:30 on a Tuesday night and I know exactly where my mom is. She’s sitting at her computer while anxiously glancing at the Angels-Rangers game…just like me. I was blessed with a mother that actually likes sports. Scratch that – loves sports. Her main love is baseball, followed by other mainstays like hockey, basketball, gymnastics, football, and every four years - curling. For as long as I can remember, my mom has made it her quest not to miss an Angels game on TV. Season after season, disappointment after disappointment, she and the rest of Orange County watches on baited breath to see if the Los Angeles Angels of Anaheim (Spoiler alert: Anaheim is not in LA) can get some October magic.

Over the last decade, it has become apparent that, despite my love for the game, my mother has me beat the in fandom category in pretty much every possible way. I’m pretty sure she could tell you every starting shortstop since Clinton was in power, and I’m fairly certain she is a member of the Church of Mike Trout (MVP! MVP! MVP!). It dawned on me last week how similar my love for the Texans is to her love for Angels. Is this where I got it from? Has she bequeathed unto me the gift (or curse) of brand loyalty?

I’m pretty sure she did…on purpose. Now I understand why she took me to baseball practice all those years. Why she took me shopping for jock straps and broke in my gloves in the oven. How she could possibly stand all those nasty bruises while I learned how to locate a two-seamer. It wasn’t because she loved me and wanted me to find true happiness through the everlasting bond of sports…she was brainwashing me. She wanted me to be this way, that clever devil. My mom has gone through life hating (and yet at the same time still loving) her team and decided my life didn’t have enough emotional trauma. I had to join her in the ranks of self-deprecating sports fans that live and die by their colors. It all makes so much sense now.

HOW COULD YOU DO THIS TO ME, MOTHER! HOW COULD YOU REDUCE ME TO WRITING AN ARTICLE ABOUT FOURTH ROUND DRAFT PICKS ON A TUESDAY NIGHT!

Sigh…on to this week’s Rookie Review.

Here are the rules (again)

1. Not every rookie will get screen time. That's the price of being uninteresting.

2. Some 2nd and 3rd year players will be featured if they have so little playing time that they can be considered rookie-ish.

3. I don't use a mathematical formula. Assigning numerical value to things that have no statistical credit but change the course of a game makes no sense to me. Instead, I go by letter grade.

Anyway, this was quite a week for the Texans. While Sergeant Swatt and the Bulls on Parade (which is an excellent name for a ska-punk band, by the way) dominated the line of scrimmage from the defensive side, the new look offensive line dominated it from the other. As such, this week’s entry will focus solely on Derek Newton and Ben Jones. I could have thrown in a nice Whitney Mercilus rush that was inches from obliterating Blaine Gabbert or some of the many beautiful routes run by Keshawn Martin that were blanked by double coverage, but in the end the show was completely stolen by the portly fellas up front. Observe.

I will start off by saying that Newton, while much improved compared to last week, still has some weak spots. He showed a frustratingly bad tendency to get beat by swim moves, and by "beat" I mean flat out embarrassed. He faced Andre Branch, a young and explosive rookie pass rasher, the entire game. Branch took advantage of Newton’s aggressiveness early and often and used his initial punches against him. Lucky for Derek, Matt Schaub worked the short game and didn’t take any sacks. When it came to swallowing power moves and driving speed rushes out the back door of the pocket, however, Newton was brilliant. It really is becoming more and more apparent that he is more a brute than a technician, but he has the tools to develop into a very well rounded tackle as time goes on. Primarily, he needs to work on not letting his strengths get exploited into weaknesses. Also, learning to cut block on the back side of a run play would be nice. He missed several of these that resulted in significantly shorter gains than they should have. Anyway, on to the tape.

I loved this play mainly because it showed how truly dominant Newton can be when it comes to physicality and just plain out-muscling defensive lineman.

The offense is in what is known as "12 personnel", which stands for 1 back and 2 tight ends. Andre Johnson is at the top of the screen, Kevin Walter at the bottom, with Arian Foster in the backfield. 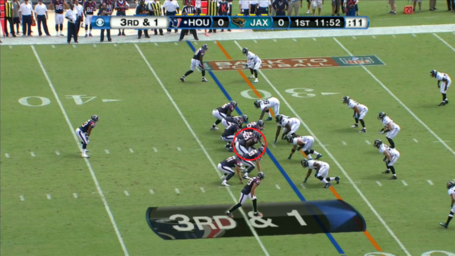 Duane Brown engages the defensive end. Chris Myers engages one defensive tackle while Newton engages the other. Wade Smith and Antoine Caldwell slip in between all three blocks to clear a path on the second level. Garrett Graham looks to be going for a linebacker, while Owen Daniels goes for the unblocked defensive end at the bottom, Andre Branch. Walter has a direct line on the safety coming down hill. 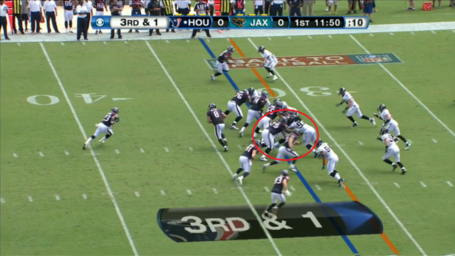 Brown holds his ground against the defensive end, Myers gets excellent push on the defensive tackle, and Newton strong-arms his man completely around and takes him out of the play. Meanwhile, Wade Smith and Caldwell pick up the linebackers. Graham engages his man and Daniels gets low enough to kick out Branch. Walter is sprinting to take on which ever defensive back gets in his way. 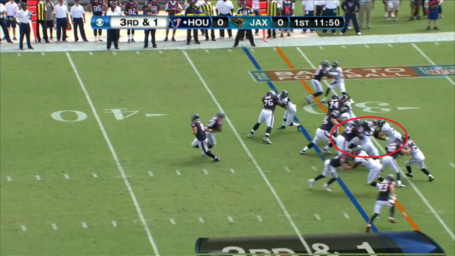 Newton continues his physical domination straight into the other defensive tackle that Myers was blocking and pancakes both of them…at the same time. Arian has a massive hole to gallop through and gets an easy first down and then some. 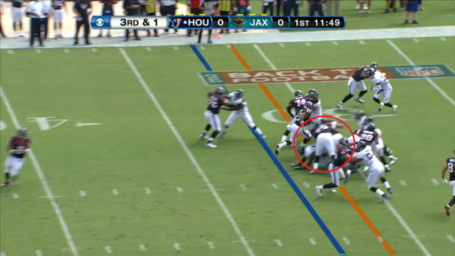 This is the kind of strength and brute force I love to see. If it’s one man throwing down against another man in a phone booth, I would take Derek against almost anyone. He’s that powerful. Here’s another example from Ben Tate’s first TD run, which was run directly behind Newton. The Texans are in "21 personnel" in an offset "I" formation. 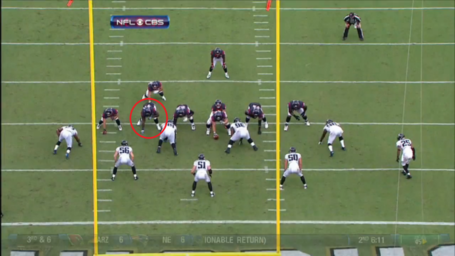 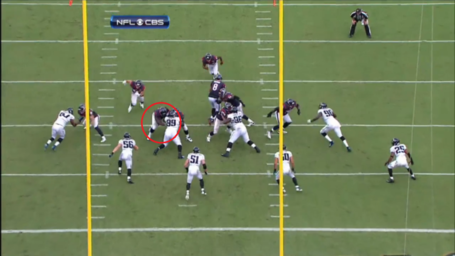 Daniels maintains his block. Smith comes across and bowls into the left outside and middle linebackers. Newton passes off the defensive tackle to Caldwell and moves to the second level to engage the other outside linebacker. Myers and Brown maintain their blocks on the backside of the play. 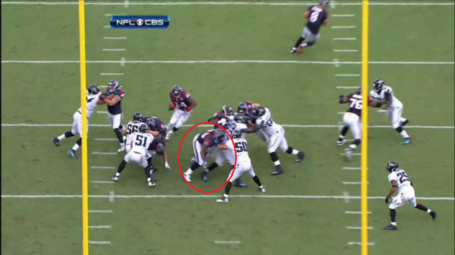 Tate hits the hole untouched and accelerates as he lowers his shoulder. Newton kicks out the linebacker just enough to force him into trying to tackle a hard-charging Tate with just one arm – a futile proposition. Ben just has one defensive back to run through to reach the end zone, which he does handily. 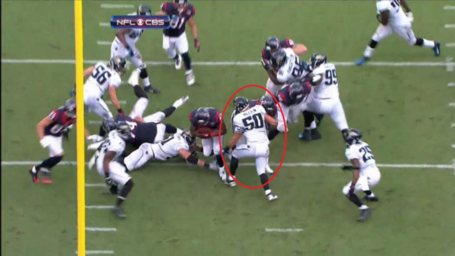 The play is successful, and Texans Nation can breathe a sigh of relief – we just ran off tackle behind Derek Newton…and it worked. Overall, I am very impressed with how much Newton has improved in just one week. He still has a lot to work on, but I am no longer classifying him as a weakness. If anything, he may wind up being a strength.

Wow. Just…wow. I didn’t know what to expect when Ben Jones started rotating in at guard with Antoine Caldwell. I knew I already liked the guy, but I was in no way prepared for the sheer volume of whoop-ass that Jones dispersed on the Jacksonville defense on Sunday. I find it hard to find a word to describe his performance. Spectacular, phenomenal, unstoppable, impenetrable, God-like. I like to mark plays as I go to come back to and examine further to see what makes it into the column. Derek Newton had 17 in 83 snaps. Ben Jones had 24 in 38 snaps. Every single down he was doing something noteworthy. I don’t think I can count on one hand the number of snaps that were even remotely "meh", let alone bad.

He had the power to win in tight spaces. He used leverage and angles like a master. Whether singled up or double-teaming, he executed his role to perfection. Pass protection was firm, run blocking was efficient. It was like having a bigger Chris Myers clone dominating the B-gap on every single snap. Take this play for example, where Jones allows Foster an easy touchdown.

The Texans are in the offset "I" breathing on the Jacksonville end zone. It’s run all the way, and everyone knows it – even the Jaguars. They bring a cornerback in between their defensive end and defensive tackle to help in run support. 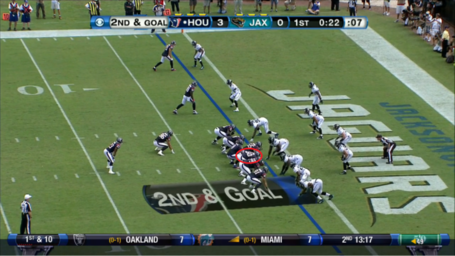 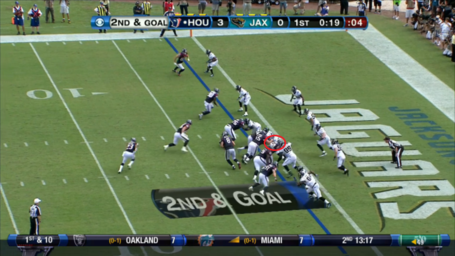 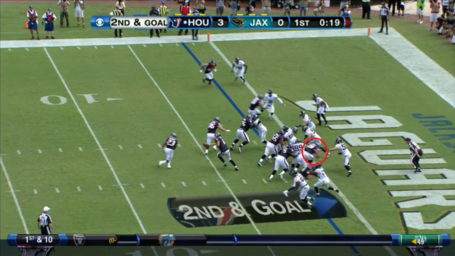 Brown sustains his block just long enough for Arian to cut back the other way uninterrupted. Newton and Meyers push three Jaguars out of the way towards Smith and Johnson, who take out the outside linebacker and safety respectively. Daniels sustains his backside block on the corner while Jones throws a perfect cut block (something Newton and Caldwell were having trouble with) on the strong outside linebacker. 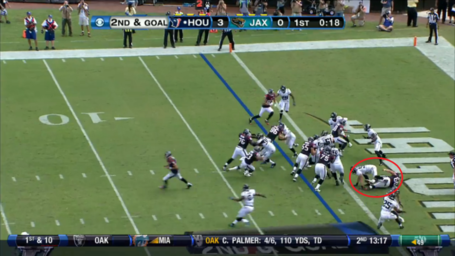 With a clear path to the end zone, Foster trots in completely untouched. That’s how you run the zone scheme. 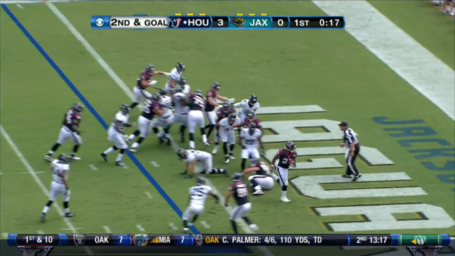 I could post literally dozens of stills about the textbook zone system guard play I saw from Jones during the entire game, but they all look exactly the same. That consistency, more than anything, is why I am so happy. It’s not a coincidence Jones was the right guard during the Texans’ soul-crushing drive that lasted over nine minutes in the third quarter. Tate and Foster did the dirty work, but the offensive line is what really made them go.

Ladies and gentlemen, we have a new guard.

Overall Grade: A+ (I don’t hand these out lightly, but it was a virtuoso trench performance if I’ve ever seen one.)

So there you have it. The offensive line is suddenly awesome again. What I thought was a major concern last week has now magically transformed into something I can’t wait to see go to war against Denver’s shiny new pass rush with Von Miller, Elvis Dumervil, and Derek Wolfe. How will they hold up? Who knows, but if they play like they did against Jacksonville, I'm not worried in the slightest.