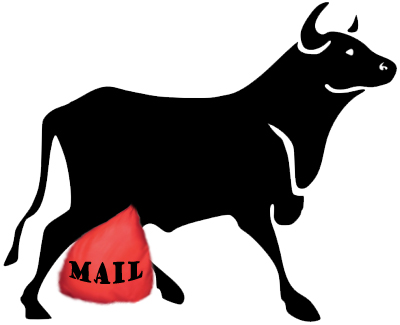 I've been doing some thinking this week, and it's about our wildly-popular former mailbag writer MDC. His campaign seems to have the momentum of a runaway freight train. For instance, did you know that his "Two Day Hangover" post last week generated over 450 comments? Meanwhile, your lowly author cannot find 40 comments on a Battle Red Bag post, and has to resort to begging people to send in questions for a mailbag. (I mean, moreso than just this post.) Also, your author suffers from the Friendship Paradox.

Well gosh, how can we all be more like MDC? For one thing, we could get drunk all the time. Also, we could tell long stories about Polaroids and penises in prison. Also, your author could not be such a stuck-up smartass all of the time -- I mean don't get me wrong, MDC is definitely an ass, but he's an ass that makes you laugh. Your author, by contrast, is a bit of a grouch. A smart and talented grouch, but definitely someone who isn't the life of the party.

But, I think MDC's best attribute as a writer is his ability to humanize his writing. We can all "be there." Sure, Archer quotes happen and he digresses a bit, but he tackles issues that appeal to all. He presents stats that, while not being entirely descriptive, are a fun mix of "Wow, didn't know that" and "Take that, people I hate!"

With that in mind, your author offers an (hopefully) amusing dating anecdote for your consumption behind the jump.

When I was 18 years old, in those carefree days of 2003, I went on my first date with someone I'd met off the internet. This was before dating someone you met online was socially acceptable, and, in fact, it was even before Facebook and Myspace took root. If I'm not mistaken, the website was Face The Jury. The lady was a squatty Hispanic girl who I will call "Brianna," and the flirting was stupidly intense because, like all 18-year-olds, I was a fucking idiot.

"Brianna" and I decided to meet and watch a movie at the Marq-E that (just barely) is on I-10 West, headed towards Tim's chosen country, Katy.

To cut to the chase, I think the most descriptive thing I could say about the two of us is what we each brought along on the date. "Brianna," worried that people on the internet were not as they seemed, brought her friends. I brought a Valentine's Day card, because I am nothing if not a sap at heart, and "Brianna" had mentioned before we met that she'd never received one before. I think if there is one thing that has been instilled in me by parents, it is a trusting nature in people. I really need to be betrayed multiple times before I'm ready to write someone off as worthless, especially if I initially think highly of them.

Anyway, it turned out that "Brianna" left much to be desired. For one thing, she smoked, and there is no bigger turn-off to me. Having had two parents and a step-parent that smoked, I was constantly asked if I smoked growing up, and I began to associate the whole enterprise with feeling dirty and gross. Then there was the fact that women (well, people, but I only ever really cared about the first part) take flattering photos of themselves on the internet and tend to not be as attractive as they are in real time, a rule that 18-year-old me was unaware of, because he was stupid. Then, of course, the whole friends thing. They weren't actually "with us," in a party or something, but were watching us from a distance. It was sort of like watching a parking cop watch your meter, in that they could have pulled the plug on the date any second they felt like it, since they were her transportation.

So, dismayed, I kind of decided to make the most of this shitty date and never talk to this woman again. We go in to see the movie, which is 28 Days Later, and her friends take a seat about eight seats away from us, in the very back row of the theater. Well, at least there's popcorn and a movie that I wasn't totally against seeing, right?

"Brianna" proceeds to jam her hand into my jeans and start rubbing up on me. It was an incredible tangle of emotions, mostly because I kinda admired how ballsy she was. Still, three main facts exist at this point. 1) So wait, wasn't this girl just totally disgusting to me minutes ago? Am i really that desperate for attention? Well, probably not, but I also wasn't exactly going to stop her, as I was 18. 2) I don't know if this is just me or a total guy thing, but ... I have functioning hands, you know? That stuff doesn't really do anything for me. 3) Most importantly, her friends are watching the whole thing.

So, essentially, we enter into a fight. "Brianna" wants to give me a "gift" in front of her friends, and I ... want nothing to do with this. In fact, I plan on wearing these same jeans tomorrow, and I'd really like to do that without them being, for lack of a better term, used. So I'm sitting back and trying to watch the movie, and she's increasingly getting more and more frustrated that she can't really finish the job.

So, while still keeping a hand down my pants, she texts me.

So, if you want to submit a question to the Battle Red Bag, here is the procedure you should follow:

1) You should shoot an email to rivers (dot) mccown (at) gmail (dot) com.
2) Said e-mail should contain a question. For instance, you could ask me what I'd name a cat. Or, if you have a little more confidence in me, you could ask me a question that has some deeper meaning in your life. Or you could do what you did last week. Again.
3) You should put a subject in your email that is something like "Bag Question," "Battle Red Bag," "Question for Bag," or "Hello Kitty Sale," to ensure that I read it.
4) You should wait a reasonable number of days. A week. Maybe 8 days. 9 if I really hit a wall.
5) You should read the answers to your questions next week. It will be enlightening. You can do it without pants if you want to. Nobody's judging you here.

(Please, no questions about Football Outsiders-related statistics or content. Thanks!)