As a Texans fan, this sounds like blasphemy, but I love Peyton Manning. Actually, I really love Peyton Manning. There is just something about him that enamors me to his every move. The way he barks orders down to the last tick on the play clock; the way defenses shift at his every word, not having a single clue what he’s doing. There’s something oddly captivating about it all. I liken it to a grand master playing chess against nearly a dozen different people at the same time. He’s a maestro and a general, an artist and a tactician. He is everything that is football distilled into a single super computer of a brain, and I absolutely relish every opportunity to watch him work.

That being said, he looked terrible on Monday night. Do Hall of Famers have bad games every now and then? Sure. Do they usually throw 3 interceptions in a single quarter? Never. That’s not to say Peyton Manning isn’t the greatest quarterback of all time – he is. What we saw against the Falcons, however, was not Peyton Manning. He misread coverages, hurried through reads, and just came out flat for most of the game. A good 4th quarter could not rescue him from the utter disaster that was the 1st half. I guess I can credit his bad performance to a pretty stellar outing from the Falcons defense, which held the Broncos to only three 3rd down conversions the entire night, but Peyton was just TURRRRRIBULLLL at times.

If the Texans want to win, the Bulls on Parade must match the numbers from the Atlanta defense, if not improve upon them. A huge reason why the Houston defense was so dominant in their 27-7 victory over the Jaguars in Week 2 was 3rd down defense. The Jags did not convert a single 3rd down, going 0-9. This got the defense off the field and on the bench to stay fresh. The offense gladly took up the slack and accounted for 83 snaps, over double the amount of the Jaguars offense. If you want to win a football game, you have to get off the field on 3rd down. This post will highlight both the Broncos 3rd down game plan against the Falcons, as well as explore what the Texans can do to stop it.

First, a few numbers. There were a total of ten 3rd down snaps for the Broncos offense.

9/10: The number of 3rd down snaps taken from the shotgun formation with 3 wide receivers, 1 tight end, and 1 running back. The 10th snap was a 3rd and 1 running play with 3 tight ends. It did not succeed.

2/10: The number of times when the pre-snap look did not match the actual coverage that developed during the play. One of those was a Zone look that ended up being Man (incompletion), the other was a Cover 1 that ended up being a Cover 4 (interception).

3/10: The number of running plays on 3rd down. All of them were within 2 yards of the 1st down marker, and only one of them converted the 1st down. The only other 3rd and short for the Broncos was a 3rd and goal that was incomplete to Thomas. The next play was a touchdown run on 4th down.

3/4: The number of 3rd and shorts that were stopped by loading the box with an extra safety and putting the receivers on man coverage.

0: The number of times the tight end stayed in to block.

1: The number of sacks on 3rd down coming from the tight end’s gap.

So…what does this all mean, exactly? Well, for starters, it means that the Falcons didn’t rely on confusion as much on 3rd down as some pundits have made it out to be. Generally, whatever look Peyton saw was the coverage he got. The Falcons’ corners just flat out played their butts off. Sure, all of the linebackers standing up and roaming a few steps here and there made it look confusing because of all the movement, but there weren’t a lot of real shifts along the line of scrimmage. It was really just a bunch of guys standing up and floating between a couple different gaps along the offensive line. When it comes to protection, this drives an offensive line crazy, but as it relates to coverages, there wasn’t really anything fancy. What did Peyton try to do to counter this? Clearing routes. Lots and lots of clearing routes.

What is a clearing route? Basically it’s sending your top weapons on a suicidal mission into double and triple coverage in order to draw the safeties away from your actual target (in Peyton’s case, this was often his tight end or slot receiver). The goal was to allow Brandon Stokley, a proficient route runner, to have the opportunity to separate from his defender and have room to run after the catch while any help over the top was busy with the vertical routes. Thomas and Eric Decker were sent vertical on many occasions to keep the safeties at bay while Joel Dreessen or Jacob Tamme generally drew a linebacker. Very seldom did any of these routes cross each other, and on several occasions on 3rd down, the entire route combination from the receivers fanned out in every possible direction away from Stokley to give him as much room as possible. Due to the wonderful man coverage on Stokley, Dreessen, and Tamme from the Falcons’ secondary all night, this strategy worked only twice to convert on a 3rd down. The lack of success definitely didn’t stop Peyton from trying though. Ironically, the best and most effective use of clearing routes of the night was not a pass to Stokely, and it wasn’t against man coverage. In fact, it was an exceptional 17 yard TD pass to Demaryius Thomas on 3rd down. Take a look.

It’s 3rd and 17 (goal). The Broncos are in "11" personnel (1 RB, 1 TE) and have three wide outs on the field. The tight end is also standing up, ready to run his route. The Falcons are in a 3-3-5 set (3 lineman, 3 linebackers, 5 DBs) with a quarters coverage look (one of only two zone looks they gave on 3rd down the entire night) and are just trying to keep everything in front of them to stop a touchdown. It’s the right call, but it makes them predictable. As marked below, Thomas is going to run a post/corner route, Stokley is going to draw both the nickel corner and the safety on a deep curl, Decker will draw the other corner and safety on a deep out, and Dreessen will run a stick route under the linebacker and into the space vacated by the nickel corner. 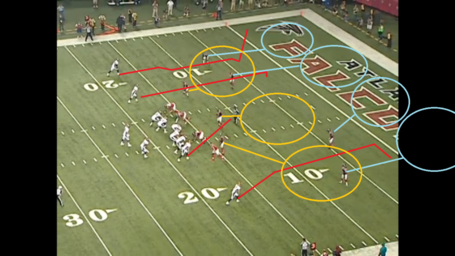 The ball is snapped. The Falcons bring pressure with four. Stokley bursts into his deep route to back the nickel corner up. Thomas and Decker cut slightly inside and cross the face of their defenders, signaling two deep post routes. The safeties read it and start to get into position. 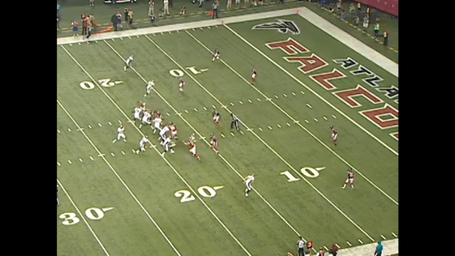 Dreessen is in the process of falling on his face after the linebacker shoved him off the line of scrimmage. The free safety picks up Stokley as the nickel corner pulls up and begins to float back to his zone. Thomas and Decker have both of their defenders sold on the posts. Manning sees it and begins his release. 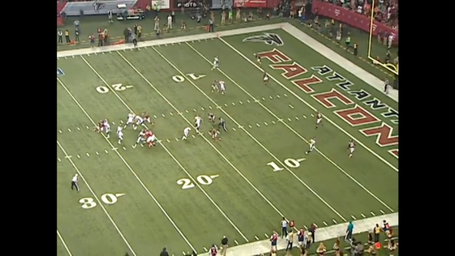 By the time the ball gets to Thomas, he has already thrown down his move and cut back to the corner. He comes down with the ball for a toe-tapping touchdown. 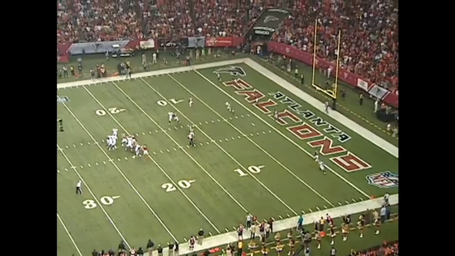 This is a great example of clearing routes. Stokley cleared the safety from jumping Thomas’ corner route and drew the nickel corner just enough to give Dreessen free range to catch and run (if he had not fallen down). As a result, the Broncos got a highlight reel score on a defense that had been lights out in pass defense the entire night. Well played.

So, the big question is how do the Texans play the Broncos on 3rd down? Honestly, they should do the exact same thing. Lots of analysts think the only way to beat Manning is to confuse him and disguise your coverages the entire game, when that is simply not true. The Falcons were successful not because their linebackers walked around the entire game, but because they simply were very effective in man coverage. Manning wasn’t shown exotic packages all night. He just didn’t have anyone to throw to. Because of the never ending supply of deep routes from Thomas and Decker, Atlanta had zerosafety help in the intermediate game and was still able to limit the effectiveness of Peyton Manning’s two favorite possession receivers. That is impressive, to say the least.

Houston has a pretty darn good secondary themselves, and I for one feel comfortable with Brice McCain going one on one with Stokley while Johnathan Joseph mans up against Thomas. Kareem Jackson can and should get over the top help with Decker from our own Danieal Manning, while Glover Quin just roams around and does whatever he wants. As long as Houston’s DBs follow Atlanta’s example and stick to the hips of their receivers all night long, they won’t have to do anything fancy. They just have to go play football.