Yet Another Reason To Love J.J. Watt

Share All sharing options for: Yet Another Reason To Love J.J. Watt

It's common knowledge that J.J. Watt is pretty much an outstanding human being. When he's not putting the fear of God into opposing quarterbacks and setting franchise records for sacks, he's also visiting families on Christmas, making clever jabs at minuscule running backs, and helping little old ladies cross the street (okay, I can't prove that one, but I wouldn't put it past him).

So just when you think he can't endear himself to fans more than he already has, he goes and does something like this.

If you haven't heard about this, there's a video floating around on YouTube showing a six-year-old girl crying because she's too young to marry J.J. Watt.

A couple of days later and J.J. Watt is now a married man...or he was, anyway.

He found the little girl and proposed to her. 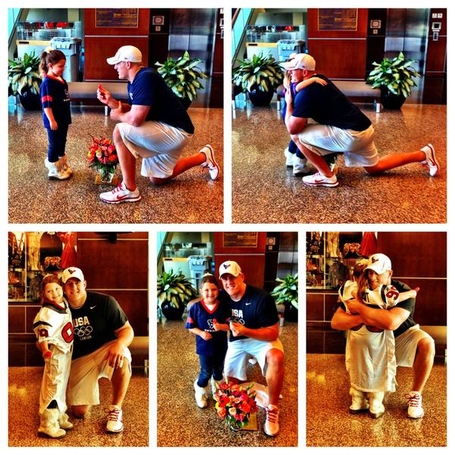 According to an anonymous source who I made up, she apparently said "yes."

Honestly though, at the rate he's going, I fully expect him to be nominated for (and win) a Nobel Peace Prize (reason: turning mediocre quarterbacks into renewable energy source).