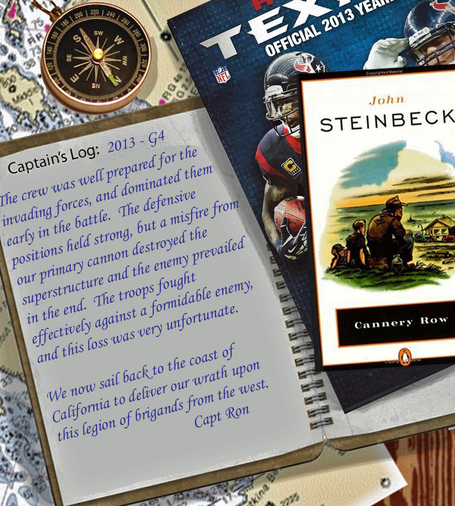 Let's get right to it. Losing stinks! There is a lot to be down about after watching the Texans blow a 17 point lead and lose in overtime in front of the hometown crowd. A lot of the blame is being targeted at QB Matt Schaub, and rightly so, but his mistakes were not the only ones leading to this loss. He is certainly worth criticizing though, as "number eight" is under fire for his third consecutive game with an interception returned for a touchdown. This is completely unacceptable, and it MUST not continue. Speaking of fire, Matt's jersey was set ablaze in the parking lot by angry fans after the game. All that being said, he will not be fired at this point. The coaches and players are rallying behind him, as they should, and he needs to shake off this funk. He will have an opportunity to make amends on the national stage in the next game on Sunday Night Football. He needs to have the game of his life, or at the very least, he needs to not contribute to the other team scoring points next week. The heat is on, but I have confidence Matt Schaub will rise above this as a professional and take us all to new heights. 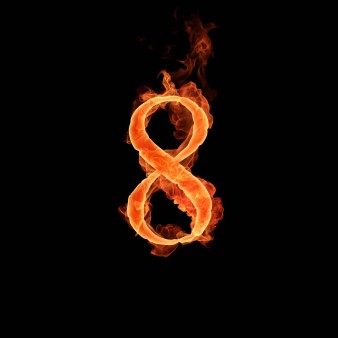 The other Texans culpable for the loss will be detailed below in the Brig. Let's step off the ledge, take a deep breath, and remove the emotions from this for a few minutes. No, I'm not suggesting fans should be without passion or emotion, but from a purely analytical perspective, the Texans came away from this game with several positives. After three weeks of misfires and sleepwalking at times, they absolutely dominated the Seahawks in this game. If it wasn't for a few mistakes, this would have been a convincing victory over an elite team for the good guys. I actually feel better about the Texans AFTER this game than I did before it. Clean up the miscues and brain dead errors of judgment, and the Texans can clearly compete against anyone and win.

The Bulls on Parade are ranked #1 in the NFL for total defense (YPG), #1 in passing defense (YPG), #2 in 1st downs allowed per game with only 14.8 average, and if you deduct the 41 points caused by turnovers and special teams mistakes, they would be 7th in points allowed. That's pretty damn good for a defense who hasn't had the opportunity to puff stats against Jacksonville yet.

When you look at those stats, it screams the obvious; they are blowing their own legs off with mistakes and failing to capitalize on opportunities. Fix those mistakes, and the formula is there for incredible success. There are TWELVE regular season games left, and the Texans are 2-2. It's time to turn the corner and get busy.

If you are still not feeling good about the potential for this season yet, consider this from around the AFC South...

The Titans just lost their starting QB to a hip injury, and worked out David Carr today. [INSERT PREGNANT PAUSE FOR EFFECT]. They face the Chiefs, who seem to be proving that coaching matters. Then the Titans go on the road to play the Seahawks in the loudest stadium on the planet, followed by the 49ers. They likely could be 3-4 at the end of that stretch before heading back on the road to play the Rams.

The Colts face the Seahawks this week, then San Diego on the road, followed by a visit from the Broncos and then travel to Houston. Three of these four games should bring them back down to earth. At the very least, by the time they meet the Texans at Reliant, we'll know much more about both teams and how this season should unfold.

The Jaguars are still listed as an NFL franchise. No, seriously. They go on the road to face the Rams and Broncos, and then shuffle the tarps covering the seats of EverBank Field to host the Chargers and 49ers. Vegas refuses to provide a spread anymore, and people have lost interest in survival "pick 'em" leagues as everyone just keeps picking the team across from Jacksonville each week.

"I'm a doctor dammit, not a mystical quarterback whisperer!"

OUT vs. Seahawks WEEK 4

In no particular order, here are the guys who contributed to the loss this week:

QB Matt Schaub - Dude, seriously. Spotting points to the other team is not going to win Houston a championship! Two more interceptions, one of which was a third "pick 6" in as many games, returned for a touchdown to tie the score with 2:51 to go in the game. [INSERT COLORFUL METAPHOR]. I would also point out that on the third play of the game, Matt (bootlegging) was unable to evade a 6' 5" 330 pound defender named Red Bryant who was lumbering toward him at a glacial pace. Not only that, Matt tried to throw it over him, resulting in an incomplete pass (thankfully) as Bryant batted it down. This makes me sad. It was also an omen of things to come from that same bootleg later in the game.

RB Ben Tate - Fumbling inside our 20 yard line is not how you secure a high dollar starting job as a running back in the NFL. Just sayin'. Oh and that also contributed 3 points to the enemy as they settled for a Field Goal afterward.

DB Eddie Pleasant - How this guy keeps getting on the field just defies logic. He is a penalty magnet straight from hell. Head butting after the whistle? Running out of bounds on coverage? There MUST be someone walking down Kirby who could replace this clown. To the plank with ya!

DB Kareem Jackson - Penalized in overtime, resulting in the other team being in Field Goal range for the game-winning kick. The general rule is that if you lift the other player off the ground and slam them, the flag is coming out. However, I saw other games the same day where it happened and went unflagged. If the runner doesn't stop moving his legs, and you can't hear a whistle, I don't see how a defender is supposed to do his job these days. Anyway, I don't see this making any sense, and the refs' decision to flag it was inconsistent (like so many things) in the NFL. 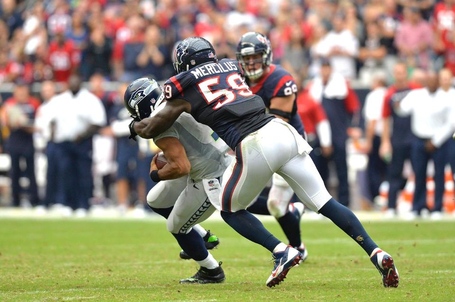 Mercilus has been building up steam over the first few games, but he really broke out big time this week. 2.5 sacks, 4 tackles and two assists. He was wreaking havoc all day! On the other side, Brooks Reed also got a sack. Our outside linebackers are finally showing up!

Arian Foster - He would have been the top BZ headliner for a really great performance, but his dropped pass that killed a 3rd quarter drive was brutal. He finished the day with 27 carries, 107 yards rushing, 6 receptions for 69 yards receiving and one touchdown. Keep it up!

Andre Johnson - 9 receptions for 110 yards! Another great outing by the G.O.A.T.

J.J. Watt and Brian Cushing - These two continue to just dominate on the defensive side of the roster. The only long scoring drive for the Seahawks came after Cushing left the field with a concussion.

I have a good feeling that D.J. Swearinger will be making this BZ board soon... 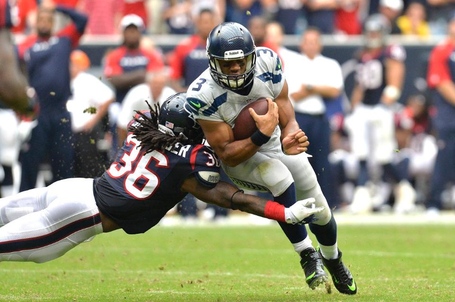 There's nothing to celebrate again obviously, but we still have to eat. Let's go above deck this time to the fantail (that's the back of the ship for you land lovers) where we set up a few BBQ pits and see what's cooking... 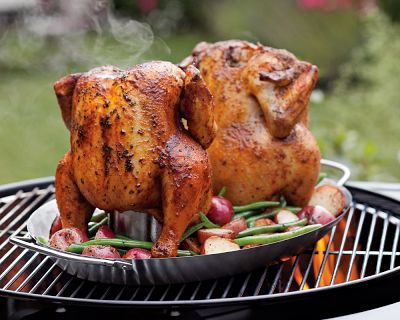 This is a great way to keep chicken moist while imparting great flavor. It originally was named as a concept of shoving the chicken over a can of beer and cooking it on a grill. I submit that this can be frustrating if the bird falls over and the beer spills everywhere. Not only that, but we need all the alcohol we can get if this Texans season doesn't settle down soon. A better solution is to go get a "beer can chicken" roasting pan. My favorite is from Williams Sonoma; it comes with two cylinders and three positions on the pan to lock it into. This allows for up to two birds to be cooked at a time, and can be done on the BBQ grill or in the oven.

Clean and then rub the chicken with oil and your favorite spices. I use a mixture of garlic, cayenne, smoked paprika and sea salt.

In the cylinders, place a handful of fresh thyme, rosemary, and sage. Just leave the fresh herbs sticking up out of the cylinders.

Fill the cylinders with beer. I highly recommend using "Blue Moon", as it has a great essence of orange and coriander, which goes very well with chicken.

Place the chickens over the cylinders, tuck the legs in a bit, and place a section of aluminum foil over the breasts and tuck it into the neck and around the wings. Remove this heat shield when you have about 30 minutes remaining of cooking time (when the meat thermometer reads about 130 degrees) . This keeps the white meat from drying out, and allows more time for the thighs to cook fully. Removing the heat shield allows the bird to fully brown as well.

Cook at 375 to 400 degrees Fahrenheit until a meat thermometer reads 170 degrees (thick part of the thigh is best area to check). Remove and let rest for about ten minutes before carving.

Grill up some vegetables and pair with a nice cold beer or pinot noir. Enjoy!

Consecutive starts for Chris Myers. That is more than six years of starting every game. Grats Myers!

Rushing yards needed by Arian Foster to break 5,000 for his career. May he do it against the 49ers next week!

Career passing attempts for Matt Schaub as of this writing. Raise your hand if you wish this were 2,999.

Points scored against the Texans in four games as a result of turnovers or poor special teams coverage:

Chargers:
Interception resulting in a TD (the very next play inside the 14 yard line) = 7

The Texans head to San Francisco for Sunday Night Football. It's time for these guys to make a statement on the national stage.